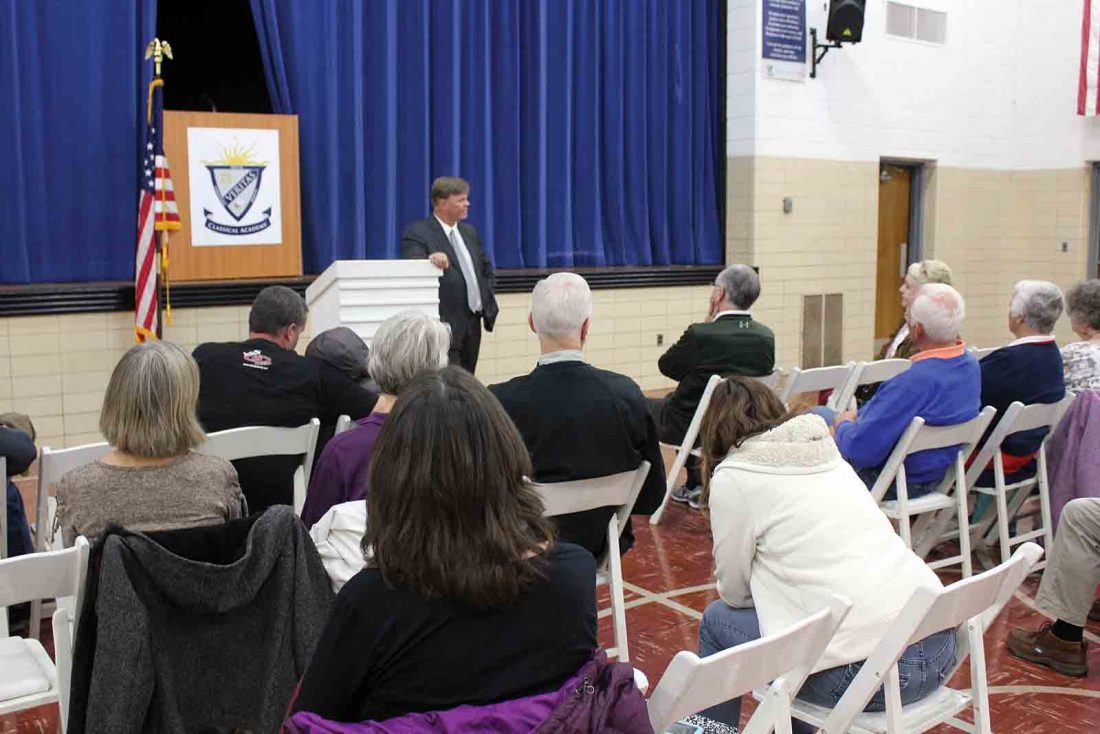 Kevin Ritter gives a free lecture to parents, grandparents and neighbors at Veritas Classical Academy on Harmar Hill Tuesday, detailing the makings of the U.S. Constitution. (Photo by Janelle Patterson)

“I’ve never heard Kevin lecture before this series and have been able to fit a few of the sessions into my schedule,” said Bill Haas, of Marietta. “It’s great that this style is available to the public to hear and to take some interest in history.”

The lecture series focuses on the “American Founding” and is taught by Washington County Commissioner Kevin Ritter, who also is a founding member of the private school on Harmar Hill and a history teacher of students there.

“We plan to repeat this series as an offering with Campus Martius next spring,” explained Ritter after the lecture Tuesday. “We haven’t set the dates for that yet, but it’s interesting information.”

Haas said he was drawn to the lecture series in looking at the founding documents of the nation through a literary lens.

“And understanding not only what’s going on in that time period to influence the writings, but really looking at their styles,” he explained.

And Tuesday’s lecture, which focused on the Articles of Confederation and the U.S. Constitution, was reminiscent more of storytelling than a recitation of dates and facts.

Ritter explained that in the few years between the Declaration of Independence and the penning of the U.S. Constitution, there were both successes of the fledgling nation and failures.

“Because this government only lasted a few years the assumption is often made that it was a total failure,” he began. “But remember it was under this government that the war was won against Great Britain, that negotiations of the Paris Peace Treaty of 1782 were completed and that same time the Northwest Territory was acquired.”

But the weaknesses of the successful separation from British monarchy led to two conventions, first in Annapolis, then in Philadelphia to address the federal government’s inability to leverage taxes, coordinate and direct diplomacy, overrule minority state objection to legislation or truly govern the young nation as a whole.

“Its weak executive power was by design,” reminded Ritter, noting the revolution’s removal from despotism as a core principle.

But of the 55 delegates who attended the four-month Constitutional Convention of 1787:

– One-third were veterans of the Continental Army.

– 12 were slave-owners or managed slave-owning property.

– Eight had worked in their own state constitutional conventions.

– Seven had served as or were standing governors.

And in the end, only 39 signed the document to go on for state ratification.

Discussion the rest of the lecture focused on three of the major accomplishments of the final document and its first 10 amendments.

– The Great Compromise: defining the representative and legislative structure of Congress in the Senate and House of Representatives.

– Bill of Rights: Ensuring a check on federal overreach.

Next week the lecture series turns its focus to the Washington and Adams administrations in the Federalist Era and the final lecture on election night, Nov. 5, will cover the Jeffersonian Period.

Both lectures are free and open to the public and begin at 7 p.m. in the gym of Veritas Classical Academy 115 Victory Place, Marietta.

Then, next spring, the school will host another six-week lecture series covering Ancient Rome and Ancient Greece and the representative government ideals founded in those nations.