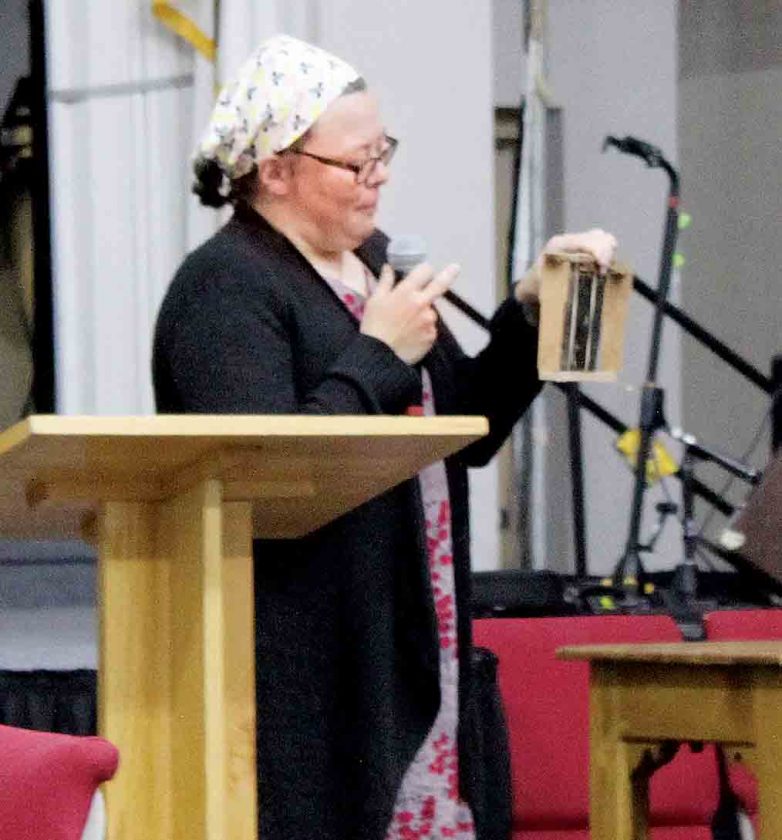 Shanda King, owner of Simply Bee, was the first speaker as part of an educational series through Williamstown’s Bee City U.S.A. group. (Photo by Candice Black)

WILLIAMSTOWN — The First Baptist Church of Williamstown was abuzz Thursday evening as Williamstown kicked of its speaker series as part of its involvement with Bee City U.S.A.

Williamstown serves as the only West Virginia town that’s part of Bee City U.S.A., a program that “endorses a set of commitments, defined in a resolution, for creating sustainable habitats for pollinators, which are vital to feeding the planet,” its website said.

The Bee City involvement began in May and Thursday night was the first of the series to provide education and get the word out. Topics for the other three meetings include information about planting pollinator gardens that invites pollinators to come in. The next few meetings will take place in January, February and March, according to Marty Seufer, committee president.

The group is starting to educate kids and teach them not to be scared of bees. A school garden will be started to get students involved, Seufer said.

Shanda King, owner and operator of Simply Bee, was the guest speaker of the night. She presented information about beekeeping and all the responsibilities that come along with that.

She shared information about honeybees and their nature. King said bees are important because 1 in 3 bites of food in someone’s mouth is thanks to a honeybee.

King talked about how honeybees came to be endangered. Back in the 1980s, a mite came from China that caused diseases among the bees, she said. To this day, beekeepers work tirelessly to keep these mites at bay.

“That is the number one reason that new beekeepers lose bees,” King said.

Another downfall for bees is a well manicured lawn. King said beekeepers lawns may not look pretty, filled with weeds and dandelions, but they provide for the bees.

Chemicals sprayed on plants and animals are affecting the bees poorly.

Public misinformation is another big issue, she said. People often think if they see a swarm of bees, it’s going to sting and kill them, King said. Sometimes they will even spray and kill them.

The best way to get rid of a swarm is to call a local beekeeper and have them safely take the bees away, King said.

Seufer commented that they were able to establish a system with the 9-11 center so that if someone called to report a swarm, beekeepers would be contacted to take care of it as opposed to someone spraying and killing them.

Seufer encouraged everyone present to attend monthly meetings or become a member of Bee City.

“It’s fulfilling to know you’re getting in the grassroots of a new program,” he said.

For more information about Williamstown’s Bee City U.S.A, check out its Facebook page.