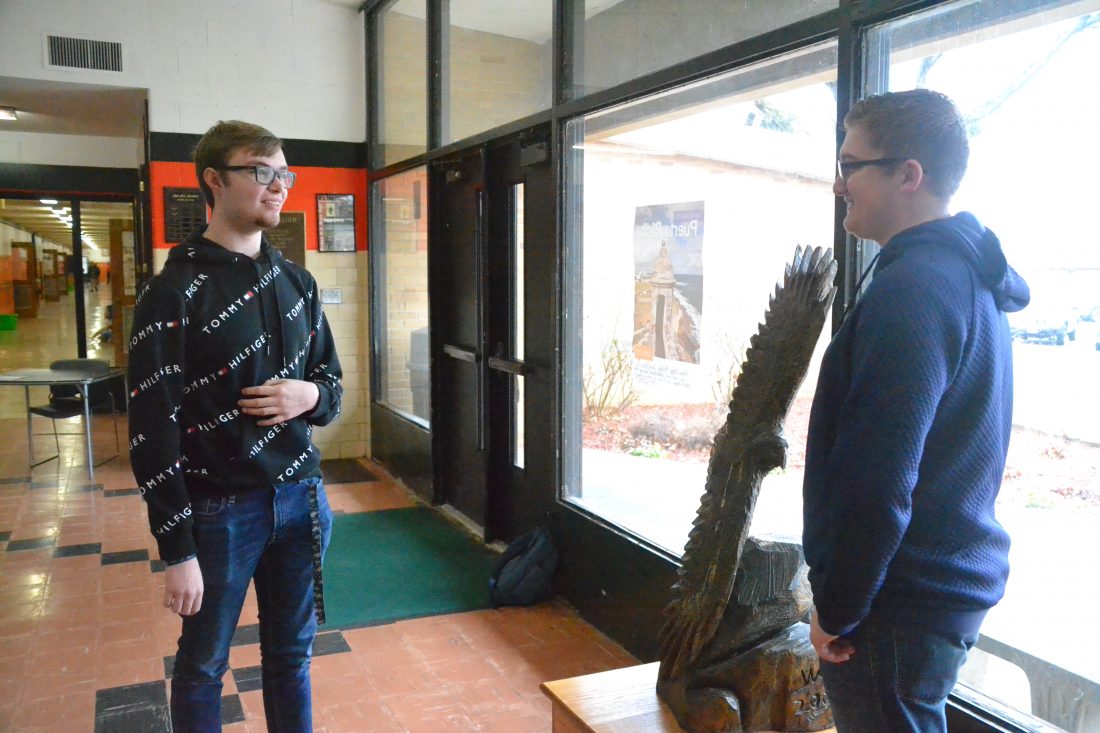 Photo by Michael Kelly Belpre High School seniors Chandler Cox, left, and Carter Barnhart talk in the lobby of the school Friday afternoon. Both students applied for jobs with the 2020 Census after hearing a presentation from Census recruiter Steve Anderson last week.

It’s an opportunity that comes once a decade, and high school students seem particularly receptive.

Census Bureau southeast Ohio recruiter Steve Anderson made a pitch last week for students to work the summer as enumerators for the decennial count, and at least two are going after the opportunity.

Belpre High School seniors Chandler Cox and Carter Barnhart both said Friday they’ve applied, and the two students say they know of several classmates who also are seeking the work.

“It’s a good job opportunity to take just before college – college is so expensive – and I’m interested in politics, so working for the government will be a good experience to have,” Cox said.

Steve Anderson, a Census Bureau recruiter who lives in Whipple, said the wage being offered for an enumerator has gone up to $18 an hour, along with a federal government stipend of 58 cents a mile for travel. People who are hired generally work in their home areas, he said, although some might be asked to work in adjacent areas that have shortages of workers.

“The seniors last year didn’t have this opportunity, and the seniors next year won’t either,” he said. “It’s an opportunity to serve your country, some people are making up to $1,000 a week, and it’s a great resume builder.”

“I think it’ll be great to be a part of this,” said Barnhart, who is scheduled to attend Washington State Community College in the fall.

The application process takes time. Applicants get started by filling out basic information at the census hiring site, 2020census.gov. They are screened through a background check that requires 30 to 60 days. The Census starts April 1, and Anderson said the application deadline is March 1.

With 300 people hired for Washington County, he’s still looking for another 200 to round out the workforce.

“We’re at the final peak operations recruiting push,” he said.

Cox, who is lined up to attend Akron University in the fall, said he’s had some experience cold-calling on people from his days in the Boy Scouts.

“I used to go door-to-door when I was recruiting for them,” he said.

He and Barnhart said they aren’t worried about hazards associated with knocking on the doors of strangers.

“I live in an isolated area, and it will be interesting going out into the rural areas and meeting people who live there,” Cox said. “I trust the Census not to send me into harm’s way, and Anderson even told us that if we don’t feel right about something, we don’t have to approach it.”

“My parents have no qualms about it,” Barnhart said.

Anderson said one of the Belpre seniors told him he’s enlisting in the Navy and was interested in the Census work, another said he’d just like to help his family out with the monthly bills.

“We have one recruiter who’s an Army vet. He worked in the 2010 Census and said it changed his life. He decided to join the military after that,” Anderson said.

The Census Bureau has a goal of hiring 2 million temporary workers to conduct the 2020 Census, and it’s still seeking about 500,000 of those workers. The project will put billions of dollars into the national economy through wages alone.

• Field work now being offered at $18 per hour.