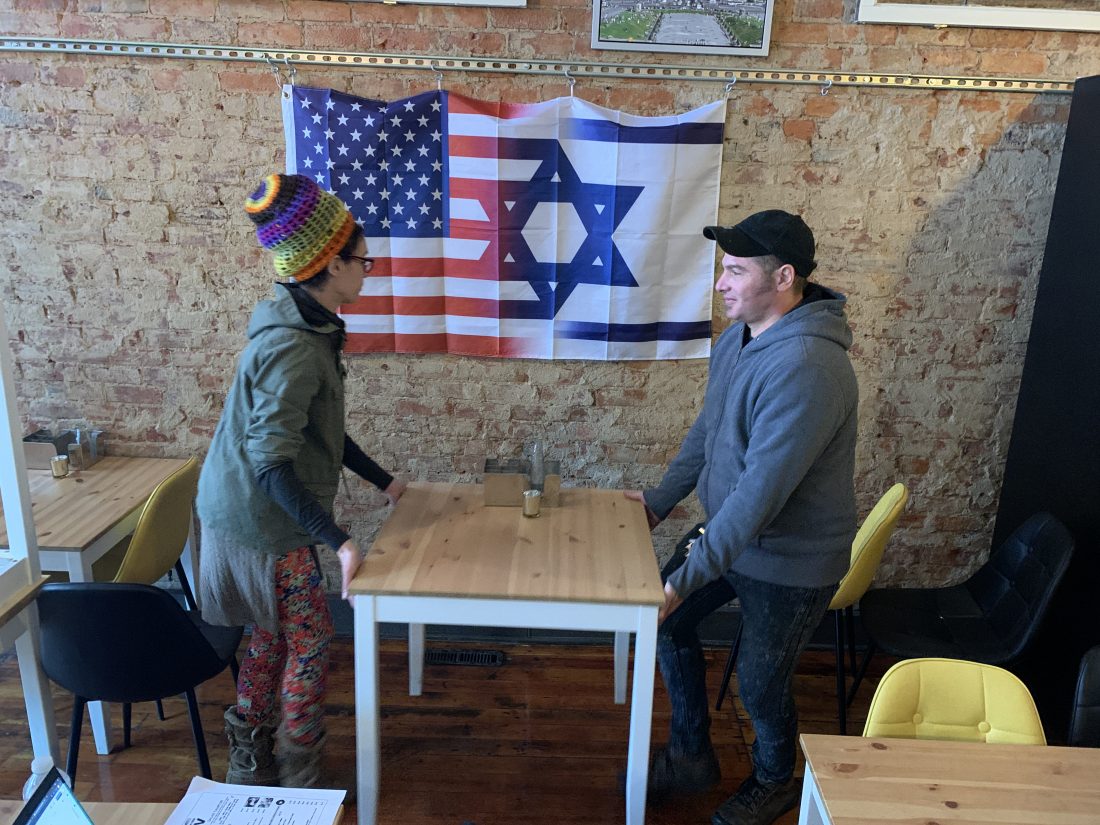 Photo by Janelle Patterson Ashleigh and Uri Passin move a table into place Tuesday in their new Israeli food restaurant to open next month at 286 Front St.

Hummus and shishlik are back on the menu in Marietta.

The former Emanuel’s Bakery at 286 Front St. is sharing its most popular menu items at a restaurant with new owners and a new name, but a similar mission.

“We’re bringing Tel Aviv to America and bringing Israel to this town,” said Uri Passin, 42, of Parkersburg. “Tel Aviv, TLV Restaurant – the mission is in our name and our new flag.”

Uri and his wife Ashleigh Passin, 35, said they want to continue to share the hummus, shishlik, baba ghanoush and shawarma made popular by David Labes when he operated Emanuel’s, and encourage diversity and discussion over the table.

Labes closed his restaurant last year but has recruited the Passins to take up the restaurant and the traditional recipes of their shared Israeli heritage while also highlighting the other nationalities the traveling couple has experienced over their lives.

“I speak seven languages, and am learning French now,” said Uri, who most recently worked as a translator in Cleveland, but has also spent time traveling on horseback through Central America as a musician and has made other travels through Asia.

“Here we want to celebrate our Jewish culture and faith–which is really important to us but in a way where we share how diversity is beautiful and important in the world,” said Ashleigh. “We’re asking people to come in with an open mind and enjoy the traditional, authentic recipes that we want to honor.”

She said she graduated from Hocking College and so had a minute memory of the small-town charm of Marietta from that experience and was excited to relocate with her husband to the area from the northeastern bustle of Ohio.

The TLV Restaurant Facebook page is where most recent buzz has begun for former patrons of Emanuel’s to stop in over the weekend for taste-tests of hummus.

“They’ve been kind of like trial runs to get people excited, giving the food for free while we get things cleaned up and ready to open,” said Ashleigh.

Labes said the permitting, including for stocking locally-brewed beers, has continued for the location and anticipates his friends to be ready for an opening in mid-March.

“We want to celebrate all cultures here, not (fuel) the hate of politics,” said Uri. “This is how we make peace, we feed each other.”

Before their opening, the pair hope to host their rabbi for a blessing ceremony over the property, sharing a mezuza above the new restaurant’s door.

Then, to participate and experience the traditions of the Passover, reservations for the April 8 dinner are being accepted.