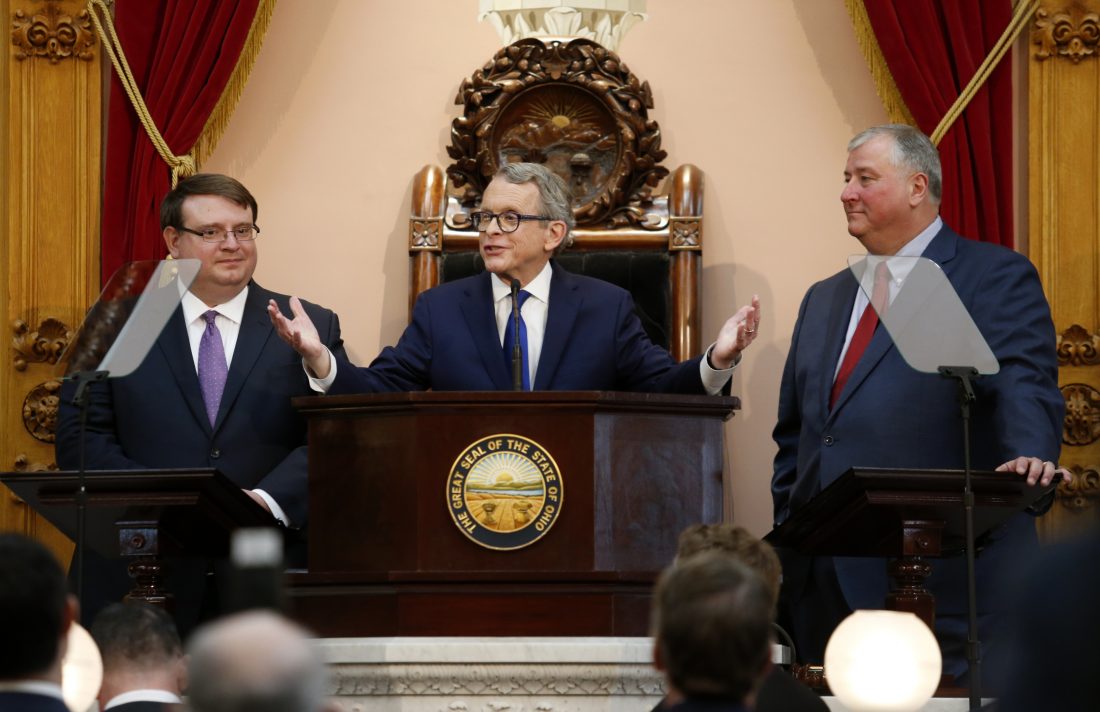 FILE - In this March 5, 2019 file photo, Ohio Governor Mike DeWine, center, speaks between Ohio Senate President Larry Obhof, left, and Ohio House Speaker Larry Householder during the Ohio State of the State address at the Ohio Statehouse in Columbus, Ohio. Lawmakers plan to address the disrupted school year and the postponed Ohio primary when they return to Columbus this week. DeWine says much of what the legislature will address involves flexibility in meeting the daily challenges of the coronavirus pandemic. he GOP-controlled House and Senate are both scheduled to meet Wednesday, March 25, 2020 and Thursday. (AP Photo/Paul Vernon, File)

That was the repeated message that Ohio Gov. Mike DeWine spoke throughout an emergency press conference Sunday from the statehouse in Columbus.

The reason: he only got part of what he wanted from the U.S. Food and Drug Administration overnight.

Early on Sunday, he called the limited approval of the FDA “nothing short of reckless.”

Then he reportedly called the White House and spoke with President Donald Trump.

The turmoil was over a new way to reuse N95 respirators, which are face masks used in large quantities by medical personnel, first responders and nursing home personnel while treating contagious patients.

Throughout last week, DeWine and Lt. Gov. Jon Husted alluded to work with the private nonprofit laboratory research company Battelle, based in Columbus, on developments to reuse personal protective equipment like the N95 masks.

Mass shortages of PPE have been an ongoing concern by officials, with many taking to social media to ask for donations.

“Innovation is really in Ohio’s DNA. We need the help of Ohio’s scientists, our engineers more than ever,” said DeWine Sunday. “They now have developed machines with the capability to sterilize 80,000 used masks per day.”

But FDA authorization which came in at 1:19 a.m. Sunday, only authorized the sterilization of 10,000 masks per day and only at the company’s basecamp west of Columbus, not in its retrofitted shipping containers ready for use in hotspots across the country.

The initial FDA approval, as penned, stated that the decontamination system “may be effective at preventing exposure.”

Denise Hinton, chief scientist of the FDA, wrote that additional requirements would be in place including tracking each individual mask run through the system and the specific healthcare professional using that mask each round.

“For a maximum of 20 decontamination cycles per respirator, compatible N95 respirators that are contaminated or potentially contaminated,” she wrote.

But Husted said the approval had a “devil in the details” by limiting how many masks per day could be sterilized and where. That specific documentation noting a limit was unavailable on the FDA website or through the statehouse Sunday.

But, the state administration hosted yet another live broadcast, this time bringing on Battelle Memorial Institute President and CEO Lewis Von Thaer to speak about the technology of the decontamination system.

“We are holding this press conference today to get everyone’s attention,” said DeWine. “I got sick of waiting frankly. We owe this to Ohioans, we owe this to people across the country.”

“We actually developed the technology at Battelle, we did this a couple of years ago with the FDA that showed that we could take N95 respirators and clean them with a concentrated hydrogen peroxide vapor for a period of several hours and basically decontaminate them for lots of things, including bugs that are worse than COVID-19,” Thaer said Sunday.

The system, according to the company, renders virus particles non-infectious on N95 respirators and enables up to 20 reuses without degrading filter performance to help address the current U.S. PPE shortage.

On March 15, Battelle started building systems at one of its manufacturing operations in Columbus for shipment to sites around the country.

Thaer said the process for decontamination consists of healthcare workers labeling their N95 masks per hospital protocol, then the hospitals bagging those used masks and shipping them to a regional Battelle decontamination unit.

“The hospitals will collect the masks, they’ll get wrapped in plastic and then when they are ready to ship they’ll put them in a second plastic bag that is wiped down with alcohol to ensure the outside is not contaminated,” described Thaer. “It is curried to our facility and then scientists and technicians.. in full protective gear will treat each mask as if it is contaminated.”

Each mask would then be loaded, he said, into retrofitted storage containers.

“Like a container you see trucks pulling around on the highway,” he explained.

Only, those containers are fitted with liners and sensors to apply a pressurized treatment inside to each mask.

“We’ll then let them cool off for five or six hours … we will then repackage and send the same masks back to the same hospitals,” Thaer said.

The Battelle CEO said one container is already staged and ready to operate in the state of New York, another is en route to New York City and one is en route to Seattle with additional containers under fabrication presently.

“So I’m talking today about the urgency of getting these online …. Not just for Ohio but for the urgency throughout the country,” said DeWine. “Lives are literally at stake … that’s why I called the president. I don’t call the president often.”

Thaer said the turnaround time for decontamination in Ohio could be as little as 24 hours before masks are shipped back to local hospitals, first responders and nursing homes.

COVID-19 OHIO BY THE NUMBERS:

403 hospitalizations, of which 139 are in intensive care units.

66 counties with confirmed cases out of the state’s 88.

In Washington County, there are now three confirmed cases of the virus, including two hospitalizations.

Two of the cases are males, including the hospitalization of a man older than 80 years old.

As of Sunday, no new cases were reported in Noble, Monroe or Morgan counties.