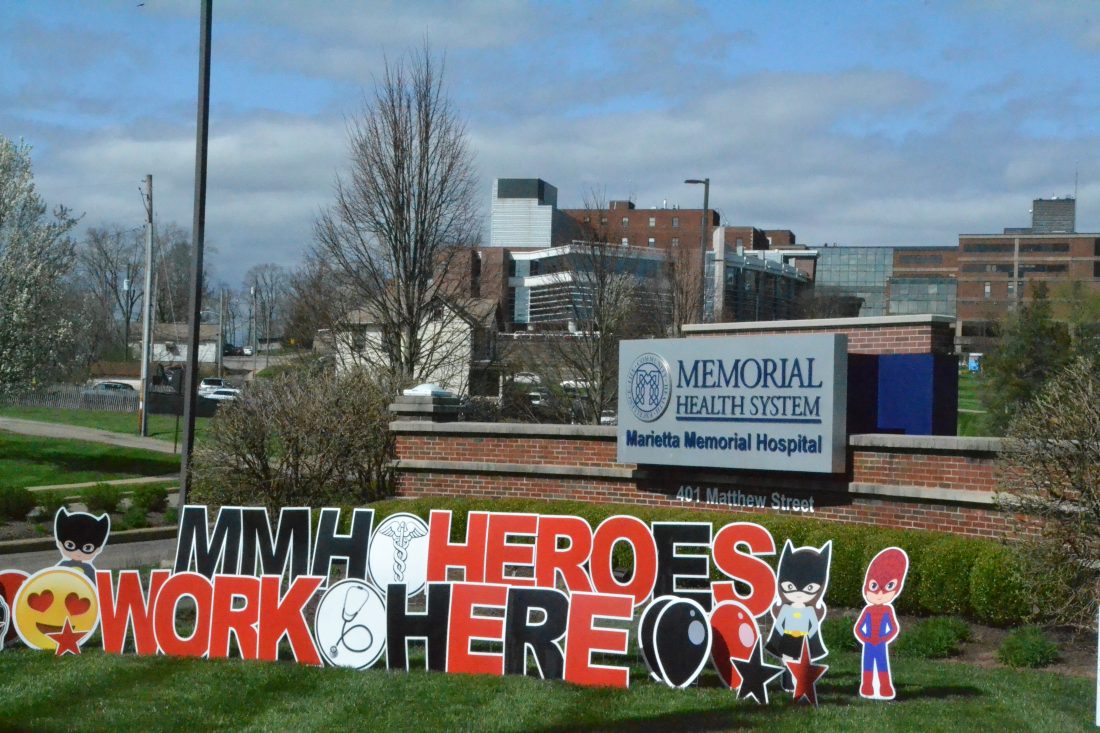 Photo by Michael Kelly Fans of the staff at Marietta Memorial Hospital had this message installed at the entrance to the facility facing Third Street. Nurses, doctors and other personnel have become the front line in the battle against COVID-19.

It seems difficult to imagine that anyone will forget the events of March 2020, as society virtually shut down to defend itself against COVID-19.

But decades from now, those examining the history of these times will want to know how people met the individual and collective challenges of a pandemic.

The Southeast Ohio History Center and WOUB, the National Public Radio outlet for the region, have set up a collaborative project to archive the experiences of people living through the COVID-19 experience.

“This is something we’ve never seen in our lifetimes,” Jessica Cyders, director of the history center, said Monday. “It is history in the making, and we’re developing a way of capturing it as it happens.”

The COVID-19 History Project aims to collect audio, video and photographic files and other documentation of the experiences of southeast Ohioans as they live through the pandemic. WOUB, its partner in the project, will assist by providing archiving services and public awareness.

Evan Shaw of WOUB has first-hand experience as a journalist researching events of the distant past, and he said what’s often missing from the accounts of great events is what the COVID-19 History Project will most value: The voices of ordinary people.

“There’s nothing better than a first-hand account. It might sound boring, but it will be interesting in the future – ‘Today, I watched Netflix for four hours’ – think about the documentaries of Ken Burns, the most interesting parts were the quotes from diaries,” he said. “It’s so important to capture those moments. Fifty years from now there will be museum exhibits, film, made about this. We want to preserve these stories while they are happening.”

The project leaders are asking everyone in southeast Ohio to send in moments from their lives recorded on phones, cameras, in writing and on audio media. The project is about more than events, Cyders said – it’s about how people feel as they live through the pandemic, how it affects their families, their concerns for the future, their ways of coping with the threat.

Most responses have come from Athens County, Cyders said.

“We’ve had a great response,” she said. “One woman compared it to the 1918 flu, and she wrote a story about how her family was affected by that. It’s really interesting to see the advice in the newspapers from back then, it’s almost exactly what we see today – stay away from people, wash your hands often.”

With children now out of school across the state, families are developing ways of keeping them occupied when they aren’t doing their education assignments at home.

“We received things from grandparents about creating games and ways to entertain the children. We’ve heard of families going on ‘bear hunts’ where neighbors have put stuffed animals, mostly teddy bears, in their windows, and they get kids to spot the bears,” Cyders said.

The project, Shaw said, is looking well beyond Athens County.

“WOUB and the Southeast Ohio History Center, we’re regional organizations, we want to know what people in Marietta, Beverly, Waterford are experiencing, all the places in our region,” he said.

The COVID-19 pandemic is frequently compared to the influenza pandemic of 1918-19, colloquially called the Spanish flu. Shaw said newspaper accounts and coroners’ death records are primary sources for investigators and historians, but the voices of individuals are scarce in the historic record, and particularly absent are those of children.

“There aren’t a lot of writings, letters, diaries, and there’s nothing from kids,” he said. “That’s a real opportunity now, with kids home from school.”

“Evan (Shaw) and I work with middle school students, and none of them were alive at the time 9/11 happened,” Cyders said. “And 10 years from now, we’ll have another generation of kids growing up who weren’t alive when this happened.”

Cheri Russo is the community engagement director for WOUB.

“My son said, ‘I’m going to be telling my grandkids about this,’ “ she said. “It was the first such moment for him, it’s like the Challenger explosion was the first moment for me. I wish I had reflected on that, written it down so I could look back at it.”

Shaw acknowledged that people’s daily activities are being recorded extensively on the various platforms of the internet, but he said trying to assemble the record of COVID-19 in the communities of southeast Ohio from such a galaxy of sources and locations would be chaotic, particularly decades in the future.

“Things are preserved on the internet, but they’re hard to find. With this project, we intend to coalesce all of it together,” he said.

“We are literally living through history,” Russo said. “People will be talking about this for hundreds of years to come.”

• Documenting the lives of ordinary people during the COVID-19 pandemic.