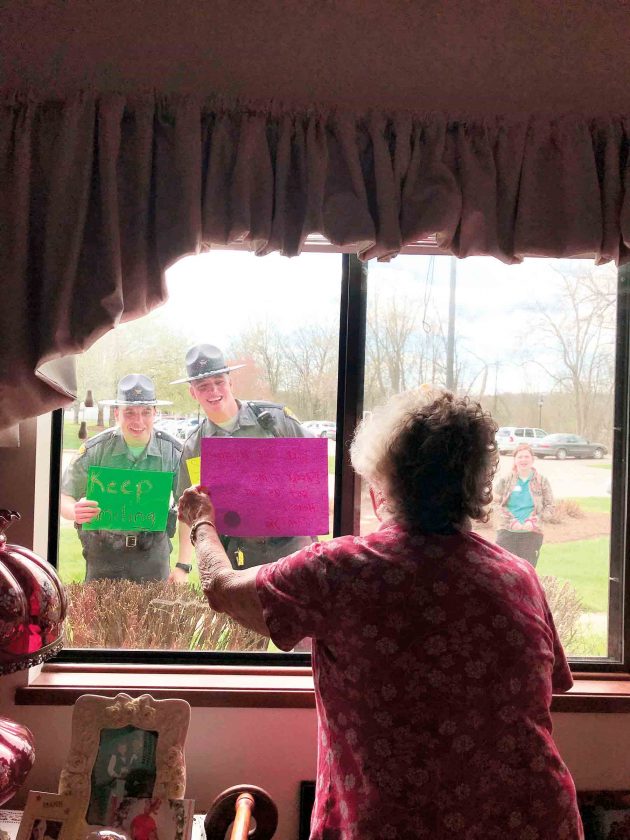 Betty, a resident of Elmcroft Assisted Living Facility, holds up a sign that reads, “Thank you. Let’s party when this is over” for members of the Ohio State Patrol’s Marietta Post to read during their visit.

”We are looking at trying to lift spirits in the community,” he said.

And according to Mindy Payne, executive director of Elmcroft Assisted Living Facility in Marietta, Post 84 is doing just that.

The idea to visit nursing homes came from the Cambridge, Ohio post.

”They started doing it and we piggybacked off of what they were doing,” Chesar said. 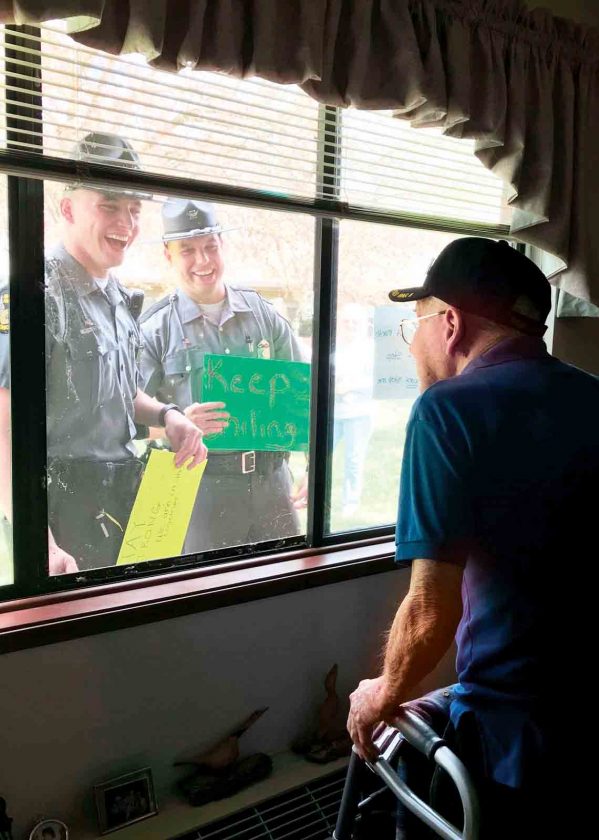 They started calling the local nursing homes and group homes and asked if they would mind the troopers coming and visiting at a safe distance, usually through the windows.

“As soon as we told our seniors that Post 84 was coming to visit them, they got right to work making their own signs for the officers,” said Payne. “They were just so excited.”

Payne said that even though it was through a window, a connection was made.

“The officers coming to visit really made their entire week,” said Payne.

Chesar said the purpose of visiting the seniors is to spread words of encouragement. 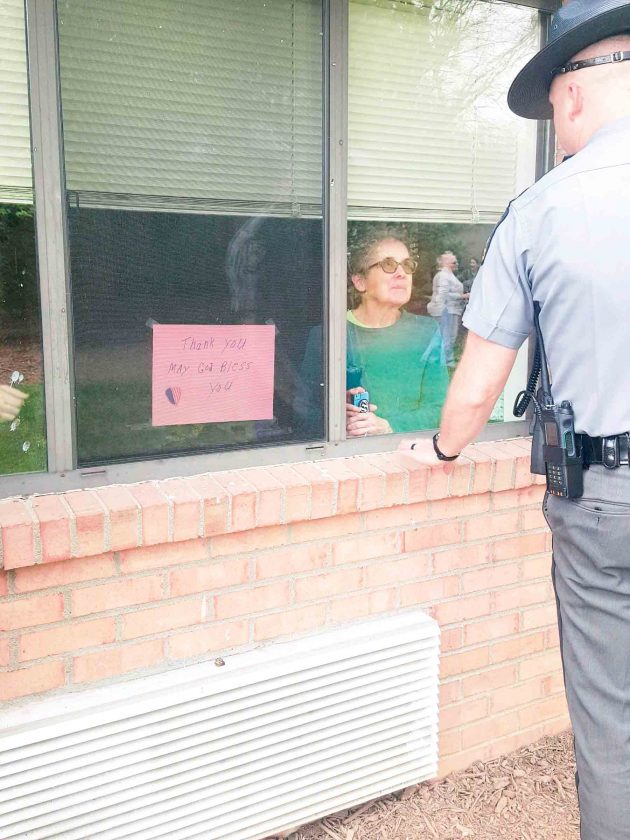 The troopers are visiting eight facilities in Washington and Morgan counties on a rotation basis and as time and their duties allow. The troopers inform the facilities before they come to allow the staff to get people to windows so they can see the troopers and the messages they are giving them.

“Our seniors do need social interaction as well. They are kind of stuck inside and unable to do so,” he said.

In response, many of the residents have started making signs and showing the troopers when they come and visit.

“They wrote some encouraging thoughts back to the troopers,” Chesar said. “That is just as rewarding, if not more rewarding, to hear back from them. It is positive for our troopers as well and really means a lot to them too.”

Payne said one man made a sign reading, “I survived World War Two and will be turning 100 soon. The coronavirus won’t beat me”. 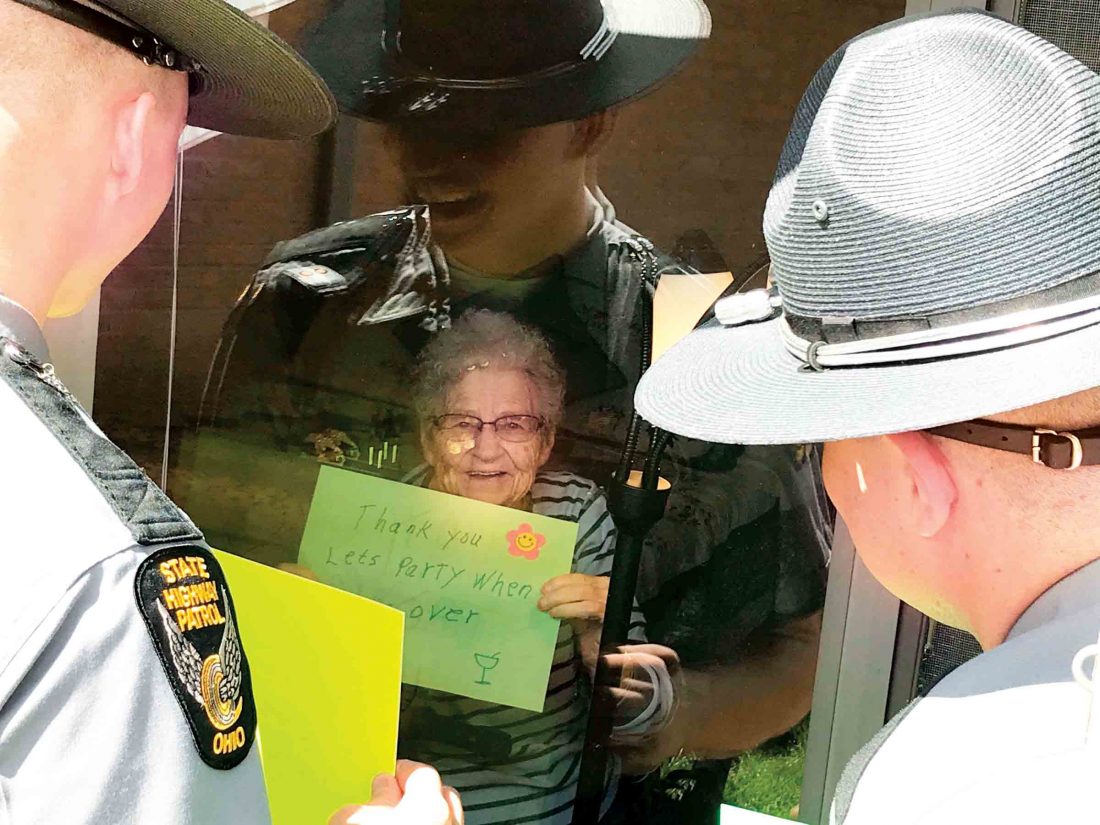 Betty, a resident of Elmcroft Assisted Living Facility, holds up a sign that reads, “Thank you. Let’s party when this is over” for members of the Ohio State Patrol’s Marietta Post to read during their visit.

She said they try to keep the seniors engaged with music, bingo from their doorways, remote control cars, crafts and anything else they can find to do while still social distancing.

“We are asking people to send letters, cards or pictures to residents as well, as it helps make the days a little brighter,” said Payne. Many people have already sent cards, but it is nice for residents to keep receiving them.

“With school being out, some parents have used this time to teach kids how to write a letter, and what better way to do that than to also send it and brighten someone’s day,” said Payne.

The Marietta Post is also working with the O’Neill Center to help deliver Meals on Wheels for those seniors who are homebound and not able to get to the store as often.

“Friday was the first day for meal delivery and one trooper was able to deliver 20 meals,” Chesar said. He did not have an overall total of the meals they will be delivering.

For many homebound seniors, the meal delivery is the only social contact they have. The delivery also helps to check on the well-being of the seniors.

Chesar said the troopers are helping some of the non-profits in the area that help others. These groups may not have volunteers available right now because of the pandemic.

The Ohio State Patrol wants people throughout the community to take care of themselves and others, Chesar said.

”We just remind everyone to stay safe, to take care and to watch after each other,” he said. ”People need to remain positive through these hard times we are going through.”