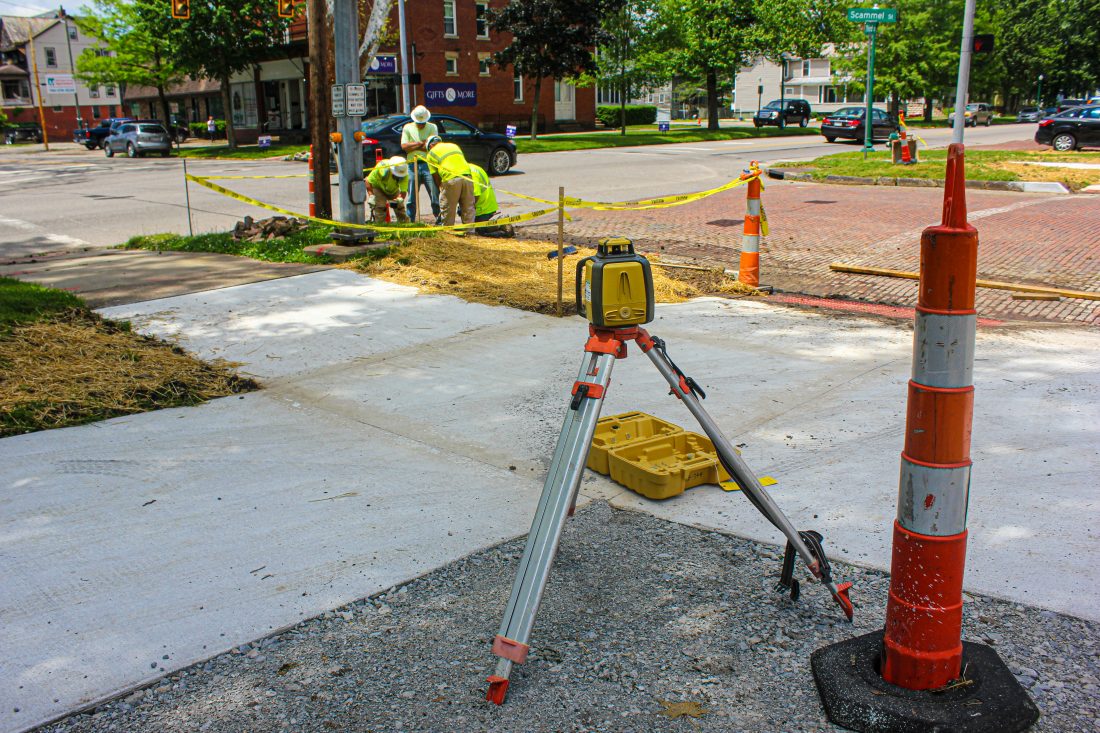 Photo by Janelle Patterson Curb ramps along Third Street are completed pre-paving of the state route in Marietta Friday with grading work to reroute trapped water back to existing storm drains from surrounding side streets.

Orphan streets are roads and alleys otherwise ineligible for state and federal funding due to lower daily traffic.

The annual asphalt paving program is separate from ongoing projects on Ohio 676 (Lancaster Street hill from Fort Harmar Drive to the top of Harmar Hill) and the urban paving project along Ohio 60 and Ohio 7 through Marietta on Third Street from Greene to Washington.

Those two state and federally-funded projects are already underway with curb ramp work and drainage nearly complete on Third and drainage, curb and guardrail work still on track this summer for Lancaster.

But during committee discussions Thursday over the 2020 asphalt resurfacing and curb ramp replacement plan for seven eligible city streets, City Engineer Joe Tucker explained to council that while the city was successful in the initial award of a competitive state grant and loan ($300,000 Ohio Public Works Commission grant and $100,000 OPWC loan), the release of those funds post-coronavirus is uncertain.

“The OPWC funding is in question, however, I’m asking council to have the authorization to seek bids,” said Tucker, noting the current cost analysis for the project ($570,366) is only an estimate at this time.

But that work is not the only work on the docket, Tucker explained as he asked for council permission to request bids.

Tucker also asked council to approve the city’s acceptance of bids for additional orphan streets not on the state application.

Those additional orphan streets include:

This addition, Tucker explained, is estimated to cost $128,731 in local funds, with no matching state dollars.

This addition, the engineer added, is estimated to cost $130,111 in local funds with no matching state dollars.

A breakdown of how those additional project costs ($258,842 total) would be paid for was not provided to council but, as Streets Chairwoman Susan Boyer pointed out, the general intent would be to use the city supplemental income tax funds designated for local streets ineligible for state and federal funding.

When Boyer assumed the role of Streets Committee Chairwoman last summer, she turned her focus onto the city’s supplemental income tax which was campaigned under the guise of local street repairs and maintenance.

Though the Third Street resurfacing project underway is utilizing 31.29 percent of the total project cost from the supplemental income tax fund, that practice is no longer an option under Boyer, Finance Chairman Mike Scales and council members Cassidi Shoaf and Geoff Schenkel’s direction.

Boyer said it would be her preference to still move ahead with one or both local street projects if state funds do not arrive this year.

When questioned by the Times Thursday, Tucker confirmed that the $30,000 set aside this year from federal Community Development Block Grant monies for curb ramps could also be rerouted to the alternate bid projects if state funds do not come through this year for the main project.

Other local funds also available for rerouting could include the permissive tax funds (the original project plans to use $45,000) and general street funds ($35,000).

Meanwhile, the new “slip” on Lancaster which briefly required a lane closure on May 20, is not a technical slip, but a washout, project manager Eric Lambert said Friday

“It’s not a slip stability issue there. The four inches of rain created that velocity and pressure in that bend and caught the material there,” explained Lambert. “If it would have happened on the other side of the road I’d have been more concerned, but that was more of a washout from that area and the (remaining) project is going to address that issue (by building) new drainage.”

The Lancaster Street hillside and roadwork began with the replacement of an underlying water line up to Alta Street and has seen new pavement at the top of the hill and bottom already.

“And my understanding is the contract is still on track for the new underground drains to take diverted water from the new curbs,” said Lambert. “Then the contractor will also put in the new sidewalk, new guardrail and add reflective pavement markings for added visibility for people coming around the turns.”

And the urban paving project along Third Street saw Shelly and Sands contractors working this past week on curb ramps and rerouting water to storm drains resting below over-paved lips along the state route.

If all planned projects and the two orphan street alternative bids are completed this year as planned, the city will have invested $2,284,537.71 in federal, regional, state and local funds into city streets.