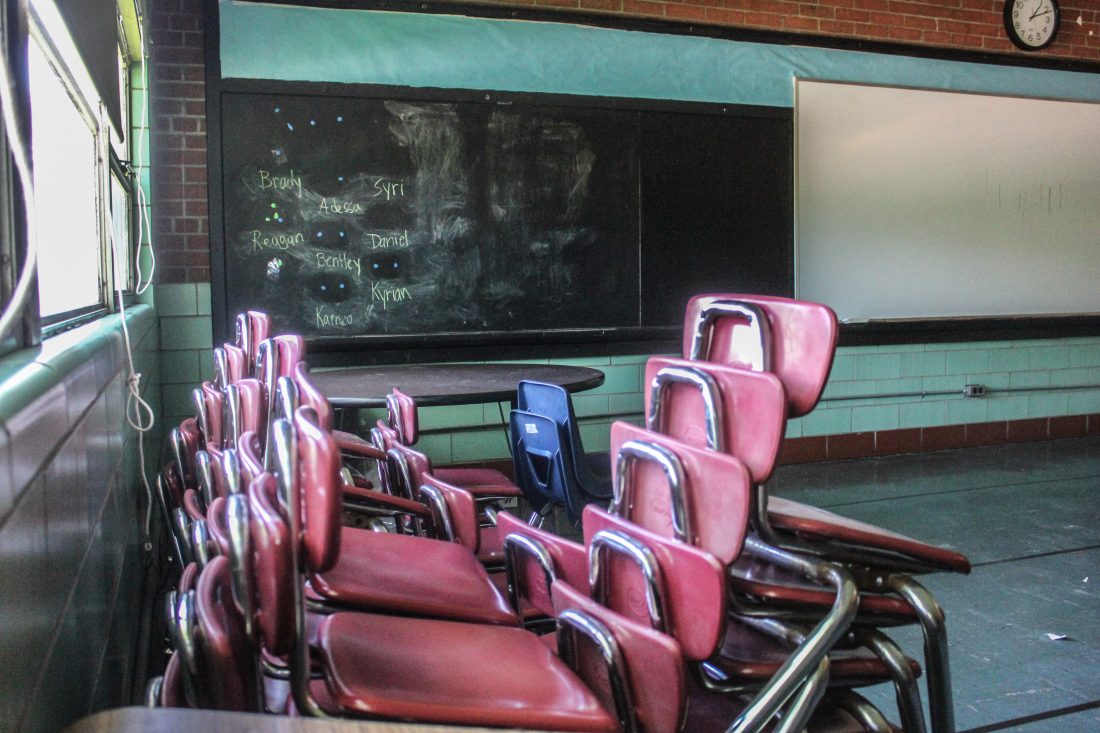 Photo by Janelle Patterson Desks, blackboards, chairs and cabinetry are all assets available for nonprofit repurpose before the demolition of Warren Local Schools' elementary facilities this year.

While the students at Little Hocking and Warren elementary schools will move on with their teachers and most of the staff to the single campus in Barlow next fall, the fates of the buildings they leave behind are only partially set in stone.

Yes, the buildings are slated to be demolished this fall.

Yes, the school district still plans to rid itself of the properties.

But how those lands end up in the hands of private investors, township trustees, an Ohio Department of Education-approved institution of learning, or another government entity has more steps, and subsequently some time still to participate in the public process.

“We have to follow a progression set out in Ohio law,” explained Warren Local Schools Superintendent Kyle Newton. “It’s hard to capture everything that’s possible when the law is pages long, but it does require board action and comes down to what the (school district) board wants to do.”

First, the sites must be available for repurposing by an existing community school.

This has happened in Marietta City Schools District on more than one occasion with St. Mary’s Catholic, Oak Grove Christian and most recently Veritas Classical Academy all successfully taking over former public school buildings.

“But that could also be the career center or Washington State Community College if they wanted a (satellite) location,” explained Newton.

Second, a district ridding itself of property must consider any future community school already pre-approved by the Ohio Department of Education that expresses interest in a retiring school facility.

Newton explained as an example, if the county’s two private Catholic primary schools had also pursued creating a high school, this venture could be considered if pre-approved by the state.

“That’s a long process to get approval though and there hasn’t been that interest,” said Newton.

Third, a district must entertain interest from surrounding political subdivisions for the public assets.

“That usually looks like the township taking over a school and making it a community center, but it could be the county, the port authority or even something like Buckeye Hills (Regional Council of governments),” Newton explained.

Newton said both Belpre Township (Little Hocking building) and Warren Township (Warren building) trustees have expressed formal interest in the building sites, with both holding historical significance to the communities.

“There’s been a school at the Little Hocking site since the 1800s,” he shared. “But the port has also expressed interest in that building.”

Sale of the assets may happen at any time, and as soon as the next district board meeting, he explained.

But what happens to the assets inside like desks, cabinetry, water fountains, chairs, bleachers and filing cabinets?

“If you need tables and the little chairs for Sunday school, or if you need cabinets, there are so many here,” said Warren Elementary Principal Joe Oliverio. “There are desks, there are boards.”

Oliverio explained that the teaching staff have until Friday to finish boxing up their educational materials, which will be transported to the new schools and are labeled by teacher and new room number.

“The plan before (coronavirus) was to have the whole production, even make opportunities for the high school and middle school groups like the football team to help with moving boxes into the classrooms,” said Oliverio. “Now with COVID, we don’t know what moving will look like exactly but the boxes can line the hallways until it’s time to put them in the (shipping containers) and haul them over to the new building.”

Newton said educational nonprofits like Ely Chapman, the Washington County Boys and Girls Club, Building Bridges to Careers and others may also lay claim if in need of whiteboards, desks and other interior assets.

“Hey if you’re needing that water fountain to save a couple thousand dollars now’s the time to work with us to help you, because you’re serving our kids, too,” said Newton. “The Boys and Girls Club is a perfect example. If Rebecca (Johnson) called me and said, ‘hey Kyle, we could use a classroom set of desks’ that’s a perfect reuse. These things aren’t coming with us to the new site.”

Newton also noted that after demolition, a pile of bricks will be made available at each site for self-salvage–meeting the repeated request from former students wanting to take home a brick.

“But in those last weeks before we demo, we’re also working with the sheriff’s office and the volunteer fire departments so that they can run drills they otherwise don’t really get a chance to run.”

Drills with paintball guns, with smoke, and even breaking windows, will all be on the table utilizing the assets before the final teardown.

– Anytime: The Warren Local Schools District Board of Education may sell the facilities at Little Hocking Elementary and Warren Elementary schools.

– Now: Nonprofits in the Warren Local Schools district like churches, libraries and child-geared programs may request donation of internal assets from the two elementary buildings.

Those requests may be made through Lisa Spence via email at lisa.spence@warrenlocal.org.

– Mid-summer: district bidding opens for demolition/abatement and salvage contract for each site.