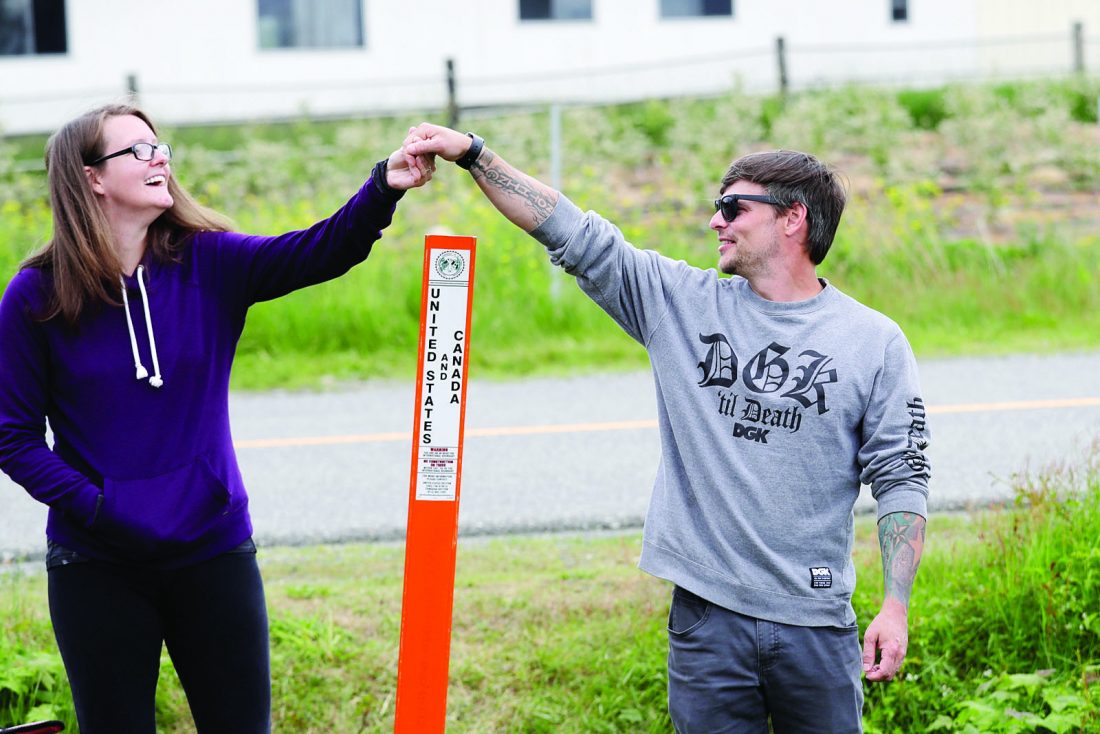 In this photo taken May 17, 2020, Kris Browning, left, stands in Canada and holds hands with her husband, Tim Browning, in the U.S., after posing for a photo at the border near Lynden, Wash. With the border closed to nonessential travel amid the global pandemic, families and couples across the continent have found themselves cut off from loved ones on the other side. (AP Photo/Elaine Thompson)

BLAINE, Wash. (AP) — Alec de Rham sat with his back against a stone obelisk marked “International Boundary” as he and his wife visited with a daughter they hadn’t seen in 10 weeks.

Hannah Smith took a bus and a bicycle from Vancouver, British Columbia, to the border to meet her “main person,” Jabree Robinson, of Bellingham, Washington.

And beside a large, white arch symbolizing U.S.-Canadian friendship, Lois England and Ian Hendon kissed giddily, reunited for a few hours after the longest separation of their three-year relationship.

Families, couples and friends — separated for weeks by the pandemic-fueled closing of the border between the U.S. and Canada — are flocking to Peace Arch Park, an oasis on the border where they can reunite, and touch, and hug.

The park covers 42 acres (17 hectares) of manicured lawn, flower beds, and cedar and alder trees, extending from Blaine, Washington, into Surrey, British Columbia, at the far western end of the 3,987-mile (6146-km) contiguous border. As long as they stay in the park, visitors can freely roam from the U.S. to the Canadian side, and vice versa, without showing so much as a passport.

It’s a frequent site of picnics and sometimes weddings, not to mention an area for travelers to stretch their legs when holiday traffic clogs the ports of entry. And for now it’s one of just a few areas along the along the entire border where those separated by the closure can meet.

Officials closed the park in mid-March over coronavirus concerns. The U.S. side reopened early this month, as Washington Gov. Jay Inslee eased some of the restrictions in his stay-home order, and the Canadian side reopened two weeks ago. England, of Sumas, Washington, said she cried when Hendon called to give her the news and they quickly made plans to meet.

England said she and Hendon have generally been careful about social distancing, but there was no thought of keeping 6 feet apart when they saw each other.

“I was really getting depressed over it — this was a huge reprieve,” she said.

It typically takes 40 minutes for England to get to Hendon’s home in Surrey, and they have usually seen each other at least once a week since they met online three years ago. Hendon, an electrician, has kept busy with work during the pandemic, while England has spent time with her daughter and her mother, who live nearby.

The couple chat by Skype almost every morning, but England missed Hendon so badly a few weeks ago that she tried to enter Canada as an “essential” visitor — a category reserved for medical workers, airline crews or truckers hauling crucial goods. Canadian guards turned her away.

One reunion was not enough. The next day, they returned with a barbecue and steaks.

About a half-hour drive to the east, other families met where roads on either side closely parallel a small ditch marking the border. Visitors set up chairs across from each other and had long chats; there’s less freedom to touch there.

Before they tried it, Tim and Kris Browning thought it might be too hard to see each other without touching. Kris lives north of the border in Abbotsford, where she is a hospital cook, and Tim lives just south, where he works as an electrician for a berry grower. They married in 2014 after meeting online; the virus has delayed Tim’s application to move to Canada.

But chatting across the ditch and a rusty guard rail, or in a nearby raspberry field owned by Tim’s employer, has become a weekly highlight — much better than a device, they said.

“It’s been really heartwarming to see all the families out, and everyone’s been so nice,” said Tim, who usually spends three days a week with Kris and her two children in Canada. “One Border Patrol agent came by and said, ‘Why aren’t you hugging your wife? Go on, hug your wife!'”