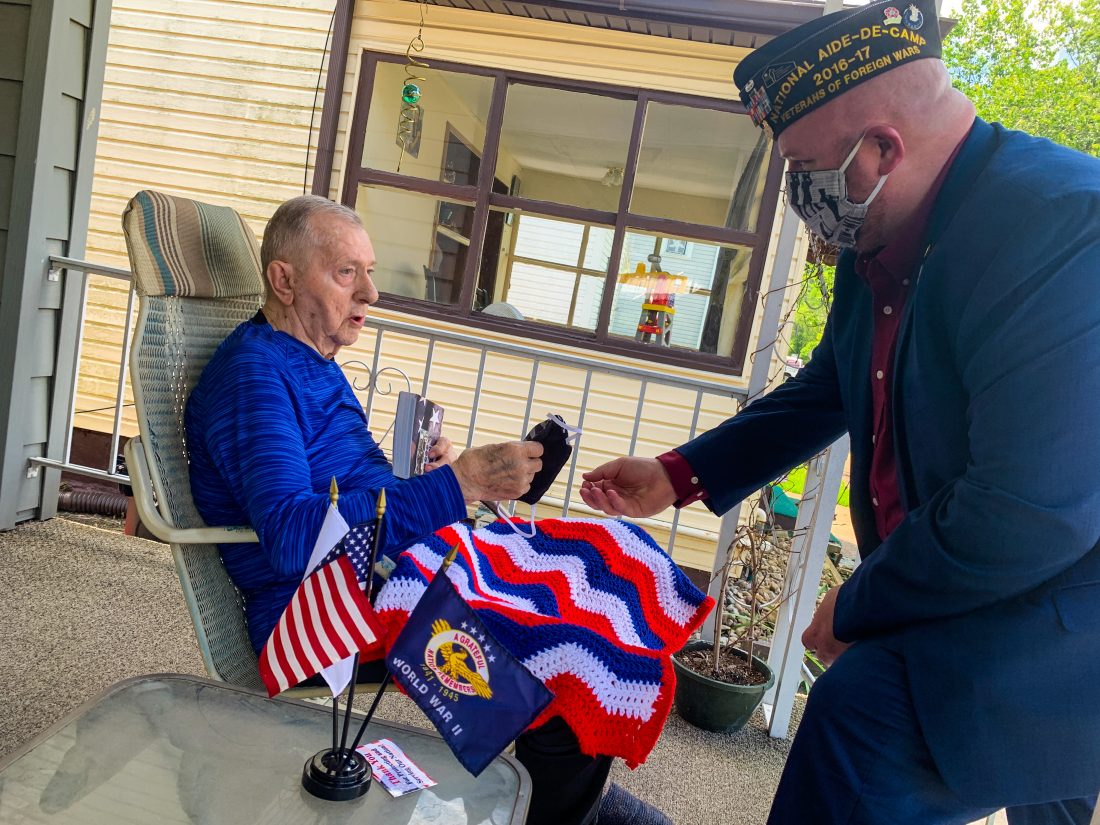 Though no formal parade snaked through the streets of downtown Marietta Monday, the flashing lights of four Marietta Police Department patrol cars escorted a small caravan down Montgomery Street.

“Our unofficial motto is pretty much seize the moments you have,” said Maggie Whittaker, a liaison for Amedisys Hospice. “We don’t know how much time we are given, so we focus early on what’s most important to each client. For some, it’s finishing that history project or getting that family portrait.”

For another, utilizing Memorial Day meant a surprise parade and ceremony of gratitude.

The hospice workers of Amedisys organized the small parade and filed together in vehicles lightly decorated with glittering banners, homemade posters and U.S. flags to cheer as they drove past their client, L. Randall Hunter’s home, before doubling back on foot for a ceremony offered by Bernie Cleveland, post commander for Post 5108 of the Veterans of Foreign Wars.

“This is a ceremony we do for hospice and in the nursing homes, it’s special to them,” said Cleveland. “It’s a pinning service that reminds us and them, that our freedoms were fought for by them.”

Hunter, 94, served in the U.S. Army during World War II from 1944 to 1947, and is the recipient of two bronze star medals and the Legion of Honor medal by the president of the French Republic, the last being the highest distinction of France.

“I was in Europe,” said the veteran as he sat on his porch Monday. “My birthday was on April 12 and then on Friday the 13th, I got my draft papers. But they let me graduate first before they took me to Columbus for the tests and before they did my physical.”

While in Europe, Hunter fought in The Battle of Colmar Pocket in the Alsace Lorraine region of France, a battle some call the second Battle of the Bulge, while others call it The Forgotten Campaign.

“It was horrible there, but what was most awful was what the people faced,” said Hunter. “They suffered.”

Hunter said he was soon thereafter returned to the U.S. for rest and recovery before a second assignment would send him into the South Pacific.

“I was supposed to join the second division, but they left early,” he explained. “I was close on my points so they let me finish out and discharge.”

His stories, and the time he spent working in Marietta thereafter, were welcomed by the ears of neighbors and the hospice workers gathered Monday.

And part of the gathering allowed for Cleveland to share several gifts with Hunter, including flags representing World War II, the United States Army and the national flag; a military issue Bible; a crocheted blanket stitched in red, white and blue; and he asked Hunter’s neighbor PJ France, a U.S. Navy veteran, to perform the pinning.

“When the call of our country was heard, you answered; self was forgotten in the cause of the greater good,” Cleveland read out to the gathering. “As you gaze upon our flag remember; the red of our country’s flag was made redder still by your heroism. The white, more stainless pure by the motives that impelled you. And in the starry field of our nation’s glorious banner, the blue has been made more radiant by the service you have given for American ideals.”

Hunter also received the coin of the Washington County Veterans Service Commission from Commissioner Jared Smith, and a mask made from material representing prisoners of war and those missing in action.

Hunter, said he was overwhelmed by the showing outside his home, and was grateful to be thanked.