Parades to be considered on case-by-case basis 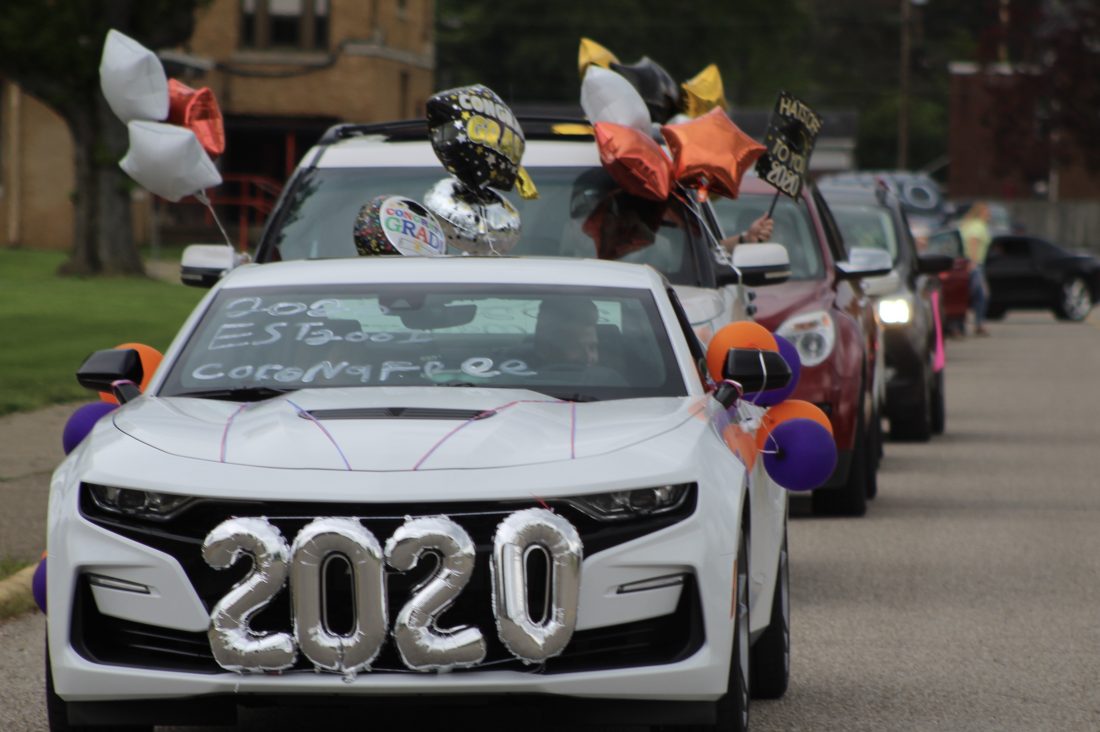 Photo by Michael Erb Belpre High School held a graduation parade Friday to honor its seniors with decorated vehicles in a Class of 2020 senior procession through Belpre.

Three formal school parades and one informal neighborhood parade are on the calendar this week, needing clarification as to whether they’d be shut down by the Washington County Health Department.

But the specific definition of parade allows for leeway in what’s allowed and how to maintain health and social distance at the same time, said Marietta-Belpre Health Commissioner Anne Goon.

She explained that the definition of a parade that she’s operating under looks to the crowds that gather, the full closure of city streets and rerouting of vehicular traffic.

“But a caravan of cars and horns that drive by, or pick up things, is different,” she explained. “The whole point is to stop large crowds from gathering.”

But with split jurisdictions in Washington County, there’s a gray area of the authority for all of the caravans called parades passing between city streets, and the “Operation Night Sky” gathering multiple branches of local law enforcement Friday to parade through Marietta, Belpre, Parkersburg and Vienna.

Marietta-Belpre Health Department, and therefore its commissioner, only have jurisdiction over the two incorporated cities of Washington County.

Meanwhile, the Washington County Health Department, whose administrator is Roger Coffman, maintains jurisdiction over the surrounding communities, villages and townships.

“We’re hoping to be able to hold this county number (of COVID-19 cases) to 116, without new cases,” said Coffman on Monday. “A drive-thru on the school grounds is a little different, and that’s what I’ve been told that there are drive-thrus on school grounds… It’s not out on the streets as what compares to Lowell with the Octoberfest parade.”

Coffman said guidelines for parades have not changed from a state order given in April banning the gathering of people.

“The Washington County Health Department will use the definition of parades as a large public procession, held in honor of an anniversary, person, event,” said Coffman. “The director of Ohio Department of Health Dr. Amy Acton’s order that was signed in April closing parades remains in effect and any gathering of more than 10 persons is prohibited in the state of Ohio. That being said, we will review parade plans submitted to this department on a case-by-case basis.”

Plans, he said, could show how social distancing measures would be continued.

“I will say that the plans should include meeting the six-foot social distancing requirements,” he said. “There’ll be no comment about masks because they’re not required as compared to retail stores… And that handouts, candy and those things like you would see in a Fourth of July parade or Labor Day parade we would not recommend giving gifts out to the crowd due to the possible spread of COVID-19.”

“We have the Waterford Elementary parade Thursday morning and a second for them Thursday night and we hope to have a unit at each,” said Warner. “We’re keeping a social distance but also showing support and helping with that traffic control at the same time.”

Warner said parades like the school’s aren’t the same as holiday affairs with individuals walking in the street but do meet a middle ground of trying to support and brighten the days of local residents.

“We’re all sort of figuring it out as we go,” he said. “We’ve done them for kid’s birthdays if we can send a couple cars, singing happy birthday over the PA system. Really we’re looking at any way we can really bridge that gap and connect again.”

Coffman said if the guidelines for distancing are followed the caravan celebrations would not be shut down by the county health department.

– If an organization, church, group or school wishes to host a parade during the pandemic the following guidelines are recommended:

– Do not hand out gifts, cards or candy.