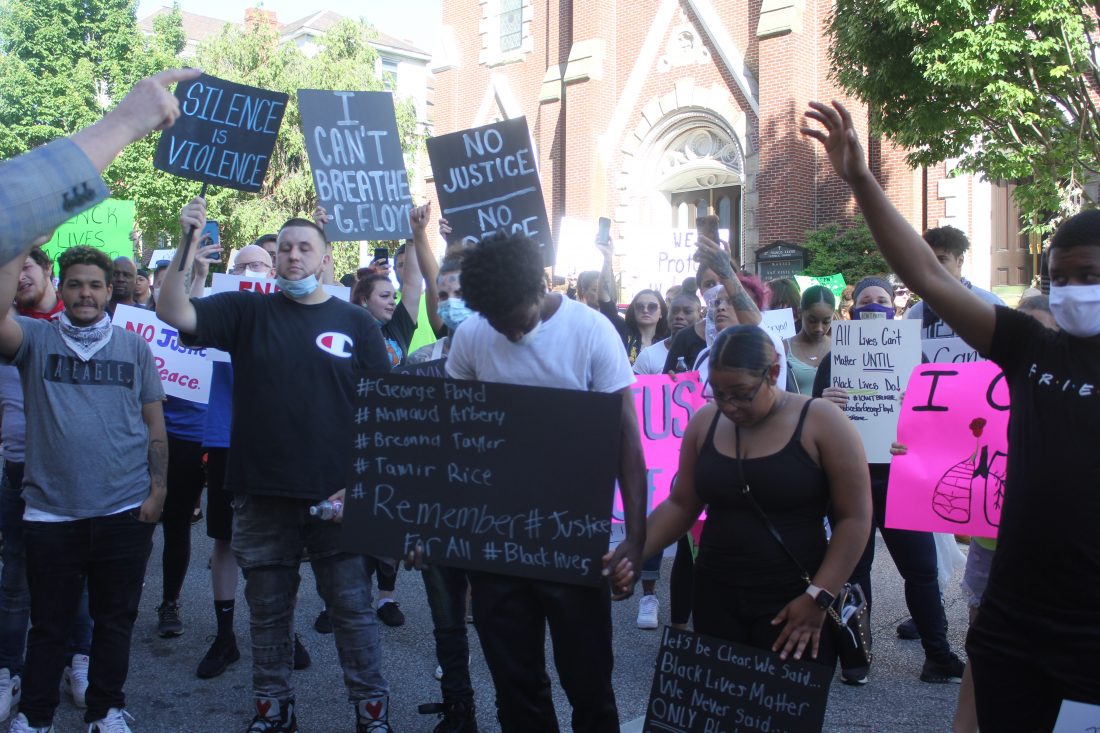 A crowd of protesters stop in front of the Downtown Bethel House of God in Parkersburg Sunday to pray together.

The right to assemble, and peacefully protest is to be upheld in Marietta on Sunday, as local residents plan to make their feelings known about issues of racism across the country.

The city will be one of hundreds nationwide to protest after the death last week of a black Minnesota man while being arrested. The officer who restrained him with a knee on his neck has been charged with third-degree murder.

“When I sit any potential officer in that chair and hire them on, it is with the understanding that they are willing to take a bullet for anyone in defense of anyone’s constitutional rights at any time,” said Marietta Police Chief Rodney Hupp on Monday.

Hupp said he has watched the viral video footage showing the death of Floyd which sparked both peaceful and violent protests over the last week across the nation.

“I am deeply ashamed of that police officer,” said Hupp. “I was concerned, and confused given my training, but will not do to him, what he is accused of doing to Mr. Floyd. I will not be his judge, jury and executioner. I will wait and trust in the jury of 12 and the judge overseeing the case, the prosecutor and the defense attorney to conduct the laws that we as officers swear to uphold.”

On Sunday, an organized, peaceful march traveled down Market Street in Parkersburg to recognize the death of Floyd and speak out against racism and police brutality.

It was both surrounded and escorted by Wood County Sheriff’s deputies, and Parkersburg City Police and for the most part remained peaceful.

But when Hupp learned of individuals attending armed, and some reports of said individuals waving their guns while moving along the march route, he called the actions “counterproductive.”

“If you have a weapon and it stays slung or holstered, there’s not a problem,” said Hupp. “And certainly in this area, it’s counterproductive and unnecessary as a point of courtesy.”

This coming Sunday, a separate protest is being organized to stay in East Muskingum Park.

“My goal is to give the platform. I’m just a small white girl but I know I have this privilege to give this platform and to listen,” said organizer Hayla Zyla-Dennis, 22, of Marietta. “Please check your intentions in coming… we ask that you do not promote violence or hate.”

Zyla-Dennis said she filled out a park event permit at Marietta City Hall with the guidance of Councilman Geoff Schenkel Monday afternoon and is scheduled to go over safety plans and goals of the event today with Schenkel and Safety-Service Director Steve Wetz.

“At the beginning, we will be holding eight minutes and 48 seconds of silence to remember the time that George Floyd was pinned by the neck and suffocated by that officer then we’ll spend about 10 minutes giving people of color the option to speak about their experiences and what it’s like being black or another minority in the Mid-Ohio Valley,” she said.

Zyla-Dennis said she then plans to remain with the contingent that gathers for the rest of the hour in silence.

“(We’ll be) standing, or kneeling, or holding signs peacefully,” she explained.

Some people of color who attended the march in Parkersburg Sunday said they plan to attend Marietta’s event, too.

“It’s hard, especially when you’ve been raised that if there’s anything to do with the cops you go the other way,” said Troy Phillip Mathews, 21, of Parkersburg, noting his mother in New York told him not to attend the peaceful Parkersburg march.

Mathews roommate, Shawn Malepa, 27, of Parkersburg, said he was also warned by his mother to be vigilant and keep in mind safety after watching news reports of larger city protests turning violent.

“But she knows her son and knows I can’t not speak out,” he said. “But we have families, too.”

Hupp said his office is often copied on requests for events, whether they occur in a city-owned park or (with separate permits) utilize a city street.

City Law Director Paul Bertram also explained Monday that if, for example, the protest organizers were seeking to march down a city street, they would need a parade permit, unless staying to a sidewalk.

“This comes down to the (U.S.) Supreme Court rulings on local governments being allowed to restrict assembly with time, place and manner to maintain public safety and access to other business and while protecting the right to free speech,” Bertram explained.

Depending on the type and location of such an event, four different city permits may be obtained in the mayor’s office by request.

•What: A peaceful protest against police brutality and racism.

• Who: All are invited to peacefully attend.

• Ground rules; physical violence against others, brandishing of weapons, vocal threats of violence, destruction of property and looting will not be tolerated.

– 12:20-1 p.m. Silent standing, kneeling and laying down on the ground in protest of racism and brutality.