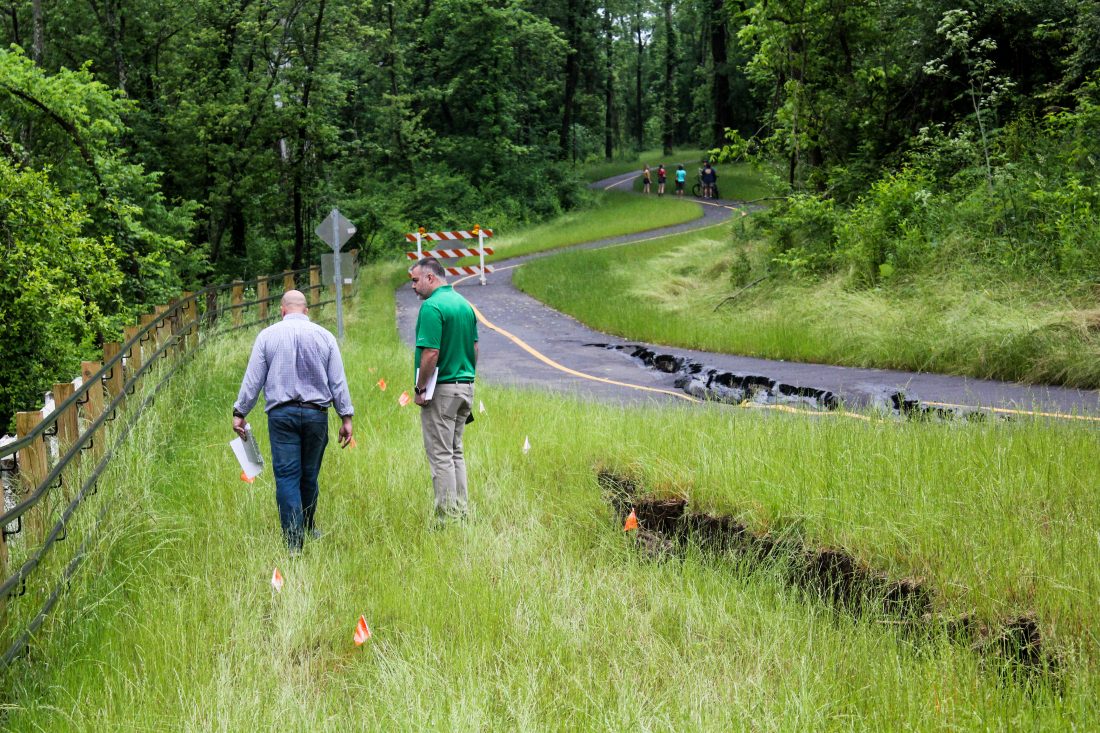 Photo by Janelle Patterson Engineers Eric Lambert, left, and Ben Russell, review soil movement along fissures in a slip on the River Trail in Marietta Friday as cyclists turn around before the trail closure.

Just nine months after its ribbon cutting, the final Duck Creek section of the River Trail in Marietta connecting the alternative transportation avenue to grocery stores on Pike Street is closed to pedestrian, cyclist and other traffic.

Marietta officials closed the trail Friday morning after cracking in the asphalt trail developed into a slip, unsettling the pathway in some spots for more than six inches.

“I saw several cracks that seemed related to each other and it appears that it goes for about 100 feet,” described Project Manager Eric Lambert, of the Marietta Engineering Department.

Lambert met with an engineer from Hull, the contracted engineering firm that designed the trail section built last year, on Friday.

“Ben Russell from Hull came down today and then Intertec PSI, the geotechnical firm, will be coming on Monday,” said Lambert.

The engineers at this stage are in a fact-finding investigation to determine:

1. Which portions of soil are moving.

3. How the slip is occurring.

Then they can determine how to stop the movement, Lambert said.

“Ben took copious notes and lots of pictures but we cannot say anything definitively yet,” said Lambert. “I’m not getting into a blame game right now. I am interested in finding what the root of the problem is so we can determine how to best reopen this asset for the residents.”

But until that solution can be devised, approximately a half-mile section of the trail, including the bridge over Duck Creek, remains closed, according to Safety-Service Director Steve Wetz.

Skinner said additional barriers may be installed to prevent pedestrian and cyclists from entering the area, as Lambert explained that there is no guarantee that the bank is done moving yet.

“I”m seeing the piles rotate, but I don’t know yet if it’s rotation and translation,” Lambert explained. “We are having the sewer lines (filmed with a) camera but as of right now I’m fairly confident that (the cause) is not a sewer main break.”

Part of the continued work Monday, Lambert explained, will be to analyze the stability of the surrounding soil.

Lambert also noted that this time of year is when slips most often appear after the freeze/thaw cycles weaken oversaturated hillsides, but that no evidence was readily apparent Friday that the portion of the trail where the slip has presented has been underwater by flooding of Duck Creek.

Janelle Patterson may be reached at jpatterson@mariettatimes.com

• A slip on the River Trail has closed 0.5 miles of the path from the Walmart/Aldi shopping area to just past Duck Creek bridge.

• The slip is under investigation by the Marietta Engineering Department, Hull and Intertec PSI.

• Pedestrians, cyclists and all other users of the trail are asked to stay out of the enclosed area for safety.