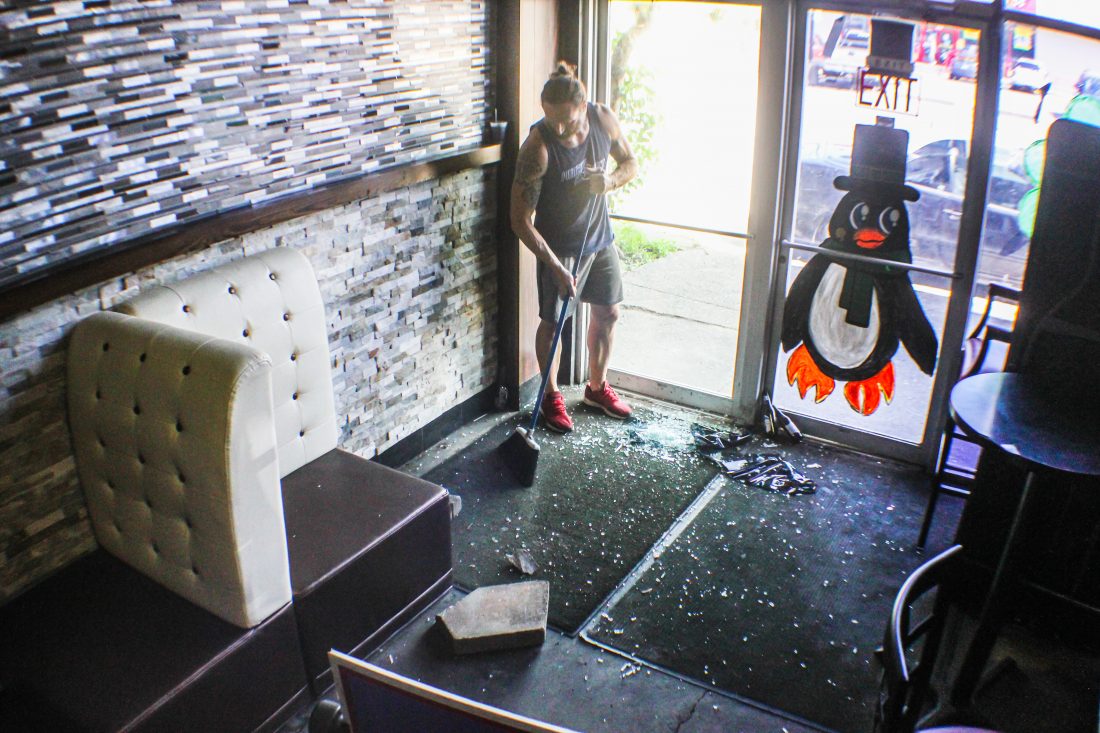 Photo by Janelle Patterson Issac Eastwood sweeps up broken glass in his business in Marietta Tuesday after a brick was thrown through the front door overnight.

Photo by Janelle Patterson Brooke Oliver helps a client with a job application after taping over a broken window where a landscaping rock was thrown through overnight in Marietta.

Photo by Janelle Patterson Issac Eastwood sweeps up broken glass in his business in Marietta Tuesday after a brick was thrown through the front door overnight.

Eight windows in Marietta were shattered in the midnight hours between Monday and Tuesday, and to local departments are investigating.

“At first I was thinking what if it was targeted? I had marched in Parkersburg on Sunday and had shared what was happening there and someone took a screenshot of that on (social media) and shared it, saying that I was a Marietta business owner that was organizing the thing,” said Isaac Eastwood, owner of The Locker Room Sports Bar on Greene Street in Marietta. “I didn’t organize, I went by myself to walk and to help and Sunday was peaceful.”

Eastwood’s main door to the bar was busted by a large paver stone between1:31 and 2:53 a.m. Tuesday, timestamped between a neighbor and a friend who observed when the glass door was still whole and when the damage was noticed.

Marietta Police Capt. Aaron Nedeff explained Tuesday that the damage to the bar was not the singular incident of damage to property overnight, though Eastwood’s call to MPD initiated the investigation. Officers then found a trail of blood down Murphy’s alley to a back window of a building owned by American Producers and on to a hole in the front left window of Mid-Ohio Valley Employment, a temp agency owned by Bill Wilkenson.

“When Brooke (Oliver) came in this morning she got here before me and saw the police already here,” explained Wilkenson. “I got in and there was glass all over my desk and all the way back to the bathroom.” 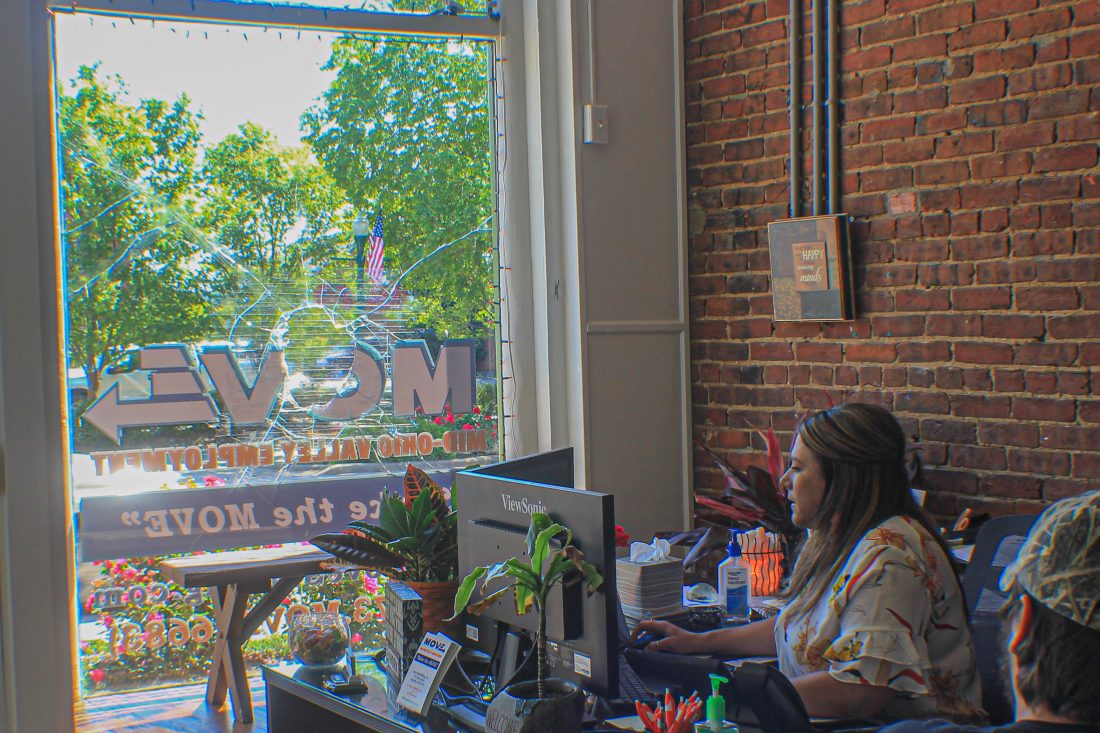 Photo by Janelle Patterson Brooke Oliver helps a client with a job application after taping over a broken window where a landscaping rock was thrown through overnight in Marietta.

He said he at first was worried it was a targeted attack on his business, before finding out that other locations had also sustained damage overnight.

“I wasn’t glad to hear other businesses were damaged but it helps to know it wasn’t just me,” he said. “People were asking if it was protesters (with the Black Lives Matter movement) or if I’d been looted and we weren’t. I think it’s important though to differentiate who’s peacefully protesting and who’s breaking the law.”

And neither business owner reported anything else damaged or stolen.

“And now that Murray’s Glass got the door replaced so quickly I’ll still open (tonight),” said Eastwood. “You own a business and you want it to be for all people. We press on, I guess. I think it was probably someone or a group of people wanting to be stupid and doing what they’re seeing others do around the country. I wonder if someone had a truck, because the brick that came through here is pretty big.”

Eastwood’s replacement glass cost him $487, but he was thankful for the quick service and quickly got back to cleaning up the leftover glass Tuesday afternoon.

Nedeff explained as the investigation continued Tuesday that damage was also sustained at the former tax service building across from Qdoba on Greene Street and that property at Marietta College was also damaged overnight sometime before or after the former computer repair shop at the corner of Third and Greene, (101 Third St.) also sustained a broken window.

Marietta College Police Chief Jim Weaver said Tuesday that the campus sustained damage to the planetarium’s ADA-accessible back door facing the corner of Butler and Fourth streets, and also sustained window damage to one college-owned vehicle and one privately-owned vehicle.

Nedeff said video surveillance footage was still being reviewed Tuesday by the end of day shift and that no dogs were used to track the blood trail between the Locker Room and MOVE on Front Street.

– The former tax service building across from Qdoba on Greene Street.

• Video footage is still being sought and is under review.

• No suspects were identified as of end of business Tuesday.