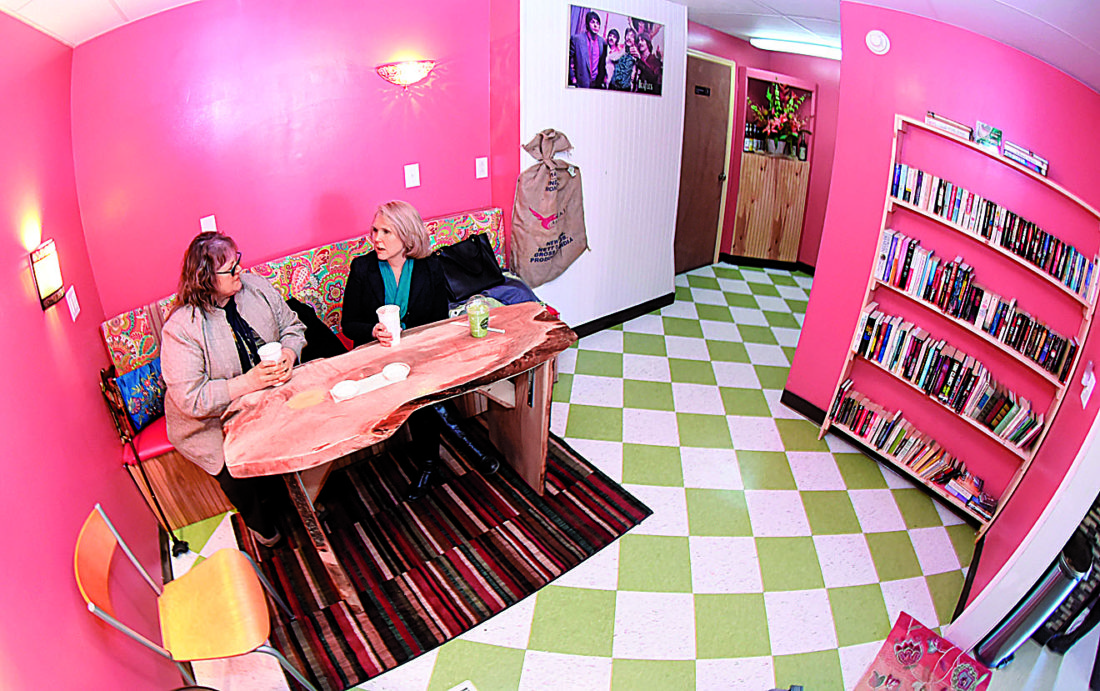 JEFF BAUGHAN Special to the Times Karen Henline, left, and Lisa McCray talk in the 'Reading Room,' which is separate from the dining room at the Unity Cafe.

PARKERSBURG — The aroma reaches the nose before the feet reach Seventh Street; the aroma of brewing coffee. The cartoon image of a scent carrying one somewhere by a finger shaped aroma comes to mind.

Quite an amusing image until you read all the memes talking about how others will suffer until their minimum quota of java is reached in the morning.

Petia Johnson, who owned Pepi’s Cafe/Seattle’s Best in the Grand Central Mall for seven years, has opened Unity Cafe at 212 Seventh St., which she describes as a “Bulgarian/American coffee and tea house.”

“There are a couple of things which will make us different,” she said. “It’s a Bulgaian/American coffee house and it’s a co-op coffee house. Every decision is made by all the members of Unity and at the end of the year everyone gets a percentage.

“It’s a challenge, yes,” she said. “Then again, if there’s a challenge out there, then we’re going to do it. So just get ready.”

Besides the dining area in the front of the coffee house, there is also a reading room off the dining room with a couch and chairs.

“We’re just happy Parkersburg is starting to get a coffee house atmosphere and there are enough here so the customer can fit into that atmosphere, no matter which one they choose,” she said. “Our character, our atmosphere is one of the Bulgarian/American style.”

W.Va. airports get grants to cope with COVID-19

WILLIAMSTOWN — The Mid-Ohio Valley Regional Airport is among the airports in West Virginia that received grants ...

Twice a year when I was a child, the Diehl’s Clothing store in Woodsfield had a sale. It was a sale my mother, my ...