Here we go again: Gearing up for flooding 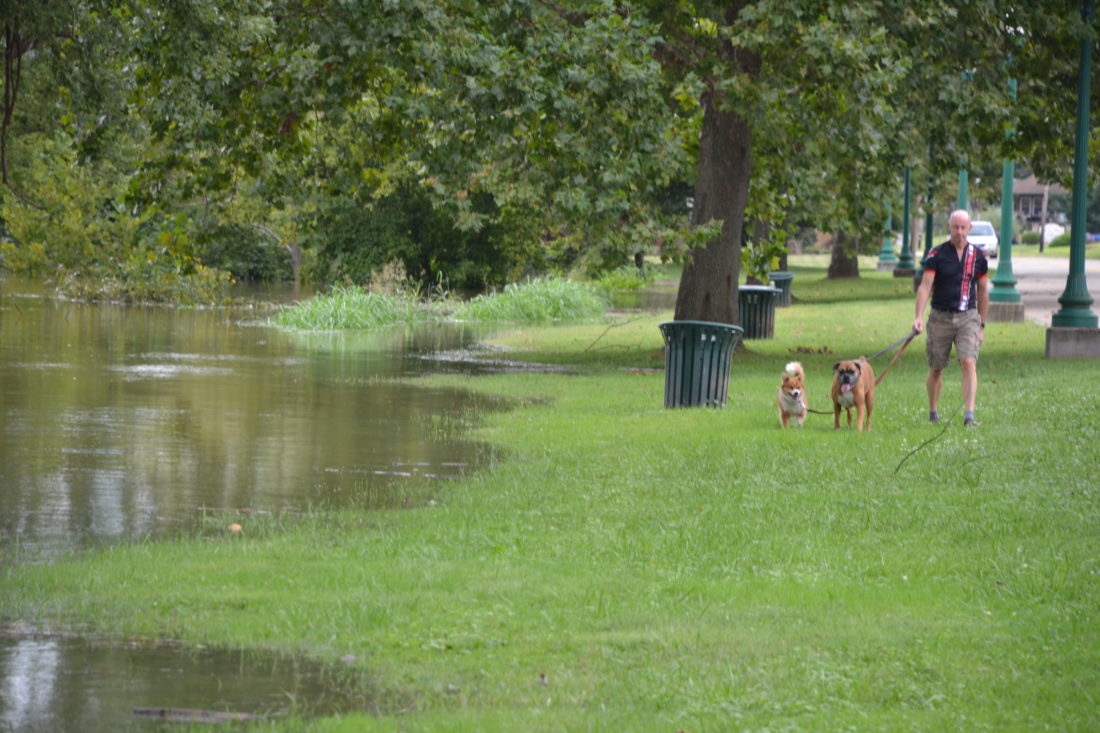 MICHAEL KELLY The Marietta Times A man walks dogs along Virginia Street on Marietta's west side as flood waters rise along the banks. Parts of the street as well as sections of Gilman Street were closed to vehicle traffic because of high water Tuesday afternoon.

With the Ohio River forecast to crest early this morning at 35.9 feet, downtown merchants have expressed little concern about flooding in their businesses, at least for now.

“We don’t worry until it gets to 40 feet,” a clerk at American Flags & Poles on Front Street said.

The National Weather Service classified this week’s flooding as minor, with some low-lying roads around Washington County closed because of high water. Closures early Tuesday included Ohio 7 near New Matamoras, Ohio 60 at milemarker 21 near Beverly, County Road Nine at milemarker 1.5, Caywood Road at milemarker 1.5, Millgate Road and Ohio 550 from the junction at Ohio 7 to Barlow.

Later in the day, Mud Lane, Newells Run Road, Leith Run, Archer’s Fork Road and Parr Hill all were closed at Ohio 7. Sections of Gilman and Virginia streets also were shut down.

On Tuesday morning the current at the levee in Marietta was brisk, with driftwood and other debris sailing past the point at a good clip, and water level on the gauge by the Army Corps of Engineers depot reading 32 feet and rising.

The rain over the weekend was attributed to the remnants of Tropical Storm Gordon, which moved ashore on the Gulf Coast of Mississippi Sept. 4, and as it headed inland was absorbed by a frontal system around Arkansas, drifting northeastward and dropping heavy rains as far north as New England.

Hurricane Florence is the next storm in the Atlantic hurricane season, predicted to move ashore around North Carolina by Thursday as a Category 4 hurricane. Myranda Fullerton, a meteorologist with the National Weather Service in Pittsburgh, Pa., said it’s too early to tell what and where the impact might be as the storm moves inland.

“We’re basically keeping an eye on it,” she said. “The models right now show a lot of disparity about how far inland it might come. We don’t have a great answer for that because it’s just too early right now. If anything, Ohio would be on the western fringe of the heavier precipitation, but it’s hard to predict with these tropical systems.”

In the low-lying areas of Marietta, businesses kept a watchful eye as the river came up, the latest flood of February on everyone’s mind. The Boat House of Marietta barbecue restaurant, low on the banks of the Ohio, was considering closing mid-afternoon Tuesday as water lapped onto its patio.

“We’re just kind of winging it,” employee Jody Mullen said. “We’re guessing it’s not going to be too bad, or hoping that, anyway.”

Sarah Arnold, president of Marietta Main Street, the trade association for downtown businesses, said the rising river was being eyed warily by most but without much alarm.

“They’re just watching predictions, and right now it’s predicted to crest at 35.7 feet,” she said. “February, it crested at just under 38 feet, and that’s the frame of reference everyone’s using.”

In February the basements of many businesses downtown flooded, and trickles of water came into the main floors of some.

“We’re all paying attention just to stay on top of it, and Marietta Main Street is watching in case we need to coordinate volunteers,” Arnold said.

City of Marietta assistant streets foreman Chris Hess said early Tuesday afternoon that Virginia and parts of Gilman Street in Harmar were closed, as were South Eighth Street from Hart to Charles and streets and the entrance to Buckeye Park, which was under water.

The damage done to county and township roads by rains in February is still under repair, and Washington County Engineer Roger Wright said the latest rainfall didn’t do a lot of damage, but because the ground has become saturated any further heavy rain could do significant harm to local roads that are already stressed.

“Folks have reported some areas with five to seven inches of rain, and that means existing landslips will begin to move again,” he said. “Fortunately, the ground was pretty dry when this rain started, but now that it’s saturated, obviously if we get anything from the hurricane, we will start to see some more movement.”

The roads damaged by rain in February are especially vulnerable, he said.