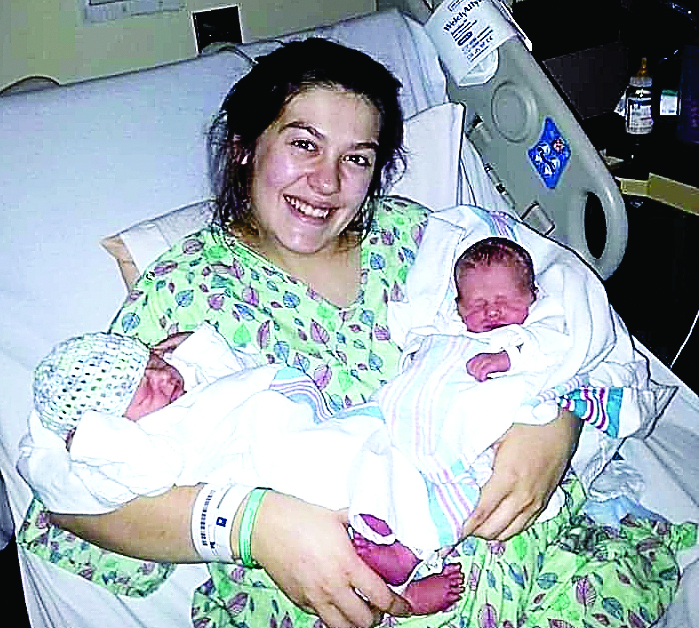 A trip from Caldwell to Marietta turned into a wild ride recently for a local couple, who began the trip to Marietta Memorial Hospital with two children in the car and had four by their arrival.

As her husband drove on Nov. 5, Dacia Pittman single-handedly delivered both her twins in the vehicle–a boy and a girl–all while giving her husband driving directions.

“One was born in Noble County and the other in Washington,” she said. “I couldn’t even believe it was happening. Everybody at the hospital is still talking about it.”

Question: Were the twins your first children or do they have siblings?

Q: On that day, how did you know they were coming? What transpired?

A: I was at home and I woke up with some light cramping. It wasn’t even labor pains…then I started feeling some pressure. It had been five years but I knew the feeling. It wasn’t as strong as with the other two (deliveries) though. I was still questioning it. I thought maybe it was Braxton Hicks.

I got my husband and kids up and said “I think Mommy is going into labor.” I called my sister-in law to meet us at the hospital to pick the kids up. We got onto the interstate and not even five minutes out, I could feel a head coming out. I said “Oh. my. lord.” I told my husband, “Babe, I don’t think we’re going to make it.”

Q: How did you feel at that moment? Were you panicking?

A: I was just calm. I thought, OK, this is happening. I was a little stunned, shocked, but I wasn’t freaking out. These were my husband’s first children and I thought he would panic but he didn’t. We were going 70 or 80 down the interstate and I told my kids to scoot over in the back seat and I reclined my passenger seat all the way back.

Q: Was your husband still driving or did you pull over?

A: He was still driving. The first one was born at 6:10 a.m. and we had left at 5:50. That was my son, Everett. My husband was calling his sister, saying “What do I do?” and I was hollering “Just drive.” He floored it. We went from 70 or 80 to 90 to100. I told him to put his hazards on and try to get us there. But right when we got to the Lower Salem exit, here comes Amelia. Then there was the afterbirth. I competed the whole delivery in the jeep. Amelia was still in her sac. I broke her sac.

Q: Did you have to push much or were they just ready to come right out?

A: It just happened. With my second child, I had two pushes and that was it. It was about the same this time. I was just really happy and really blessed that they were both head down and I was able to get the fluids out. When we got the hospital, the doctors asked me if I had experience with delivery. I said no and they said “Well, you do now.”

Q: Your husband was driving, so it was completely a one-woman show? You did everything?

A: He couldn’t help me. He had both hands on the steering wheel. I even had to tell him how to get to the hospital.

Q: Did you get to have a moment with Everett and take in that he was there before Amelia was born or was it too fast?

Q: So, you were holding him as you delivered her?

A: Yes. And my kids were in the backseat and they stayed so calm. I thought they’d be scared and I didn’t want to scar them, so I had them pull their blankets up over their eyes. So they didn’t watch but when they heard the babies crying, they said “Mommy, can we put our blankets down” and they got to see them.

Q: What did your family think when you told them about the delivery?

A: It was actually my mom’s jeep we were in. We had borrowed it because our car broke down. She came to the hospital and was like “Oh, I missed the birth” and I said, “Mom, everybody missed it.” Then I had to tell her “I’m so sorry but we had them in the jeep.” It was a mess.

Q: She probably wasn’t upset since the babies were healthy, right?

A: She said the jeep just has more sentimental value now.

Q: Do you think that creates an extra special bond with you and the twins–that you actually delivered them yourself?

A: It does. I was so surprised it even happened and after it was finally done and both of them were on my stomach, it started to sink in. I just thought, I can’t believe this just happened.

Q: Did you have to cut the umbilical cord?

A: They did it at the hospital. When we got there, they had eight or nine nurses come out and take the babies and they put me on a stretcher.

Q: Did they seem healthy to you right away? Had you been worried about that at all?

A: They were definitely really healthy. I was checking to make sure they were breathing and they cried from the exit to the hospital, so that was a good sign.

Q: Were they early?

Q: How big were they?

Q: Do you think you might have more kids? Would you worry about the delivery?

A: I actually got my tubes tied. I’ve got four kids and I finally got my girl, so I’m done.

Q: Do you plan on telling them the whole story someday?

Q: How are they doing now?

A: They’re wonderful. They’re on a schedule and they sleep really well. I have to set an alarm to wake them up or they would just sleep forever. They’re such good babies. I’m blessed. The Lord was looking over us.