‘The Little Mermaid’ performed by Marietta Choir Department this weekend 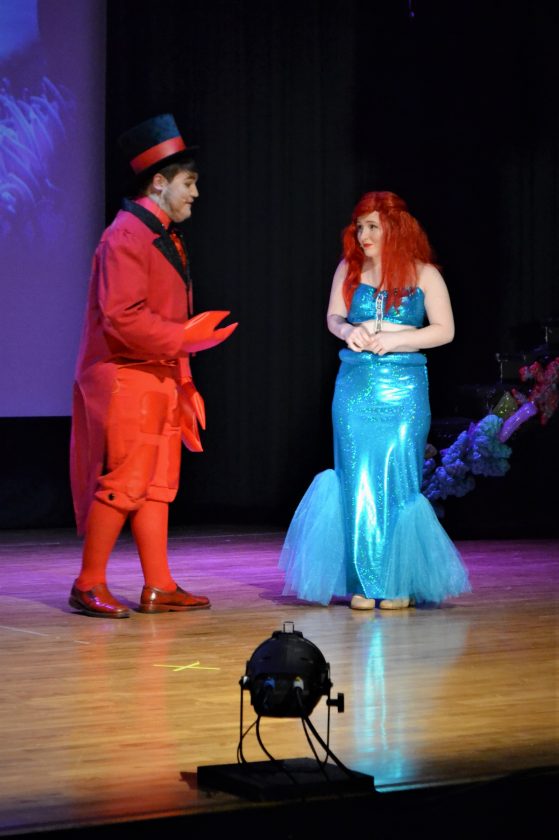 This weekend, the Marietta Choir Department will present the musical, “The Little Mermaid,” in the Marietta High School auditorium. At 7 p.m. on Friday and Saturday, and at 2 p.m. on Sunday, students from both the middle school and high school will put their spin on the Disney classic.

Scott Rieder, choral director for Marietta City Schools, is the co-director of the play and said even though people may have seen the movie, there will be new things in the play that will grab their attention.

“There will be surprises they won’t be expecting,” he said.

Rieder said as he has gotten to know the students, he felt this play fit the 30 actors who are in the production. He said that even though this cast is smaller than in previous years, they will put on a great show.

“We are small but mighty,” he said.

The story centers around Ariel, a precocious princess who is also a mermaid. Ariel continues to go against the will of her father, King Trident, by visiting the surface world. While there, the princess finds adventure, drama and love.

Mikayla Tucker, a senior at Marietta High School, will play Ariel and said the role was something she has thought about for years.

“(Ariel) has been my favorite princess of all time,” she said. “I was destined to play this role.”

Tucker said the play’s story is based on the father/daughter relationship dynamics that happen when the child tries to become her own person. She said as a teenager, she can definitely relate to the situation Ariel is in.

“The meaning behind it is so emotional,” she said. “I can see myself in Ariel, except for the tail.”

The part of Sebastian, the calypso singing crab, is played by Marietta High School senior Allen Caltrider. He said mastering the Carribbean accent wasn’t the most difficult aspect of bringing the character to life.

“He’s not verbally very funny,” he said. “I have to put more physicality into it…and use more physical comedy.”

Nick Kelsey, a junior at Marietta High School, plays Ariel’s love interest, Prince Eric. Kelsey said the work the cast, crew and parents have put in will show in the performances.

“It’s a very cute musical,” he said. “Everyone has done a really great job in putting it all together.”

“There is a lot that goes into this production,” Rieder said.

Rieder said that without help from the parents of the performers with makeup, sets and costumes, the play wouldn’t be as big of a success. He also said he wanted to stress that the production isn’t just geared for people associated with the city’s school system.

“This is a community event,” he said.

Tickets are $10 for general admission seating and are available just before the performances in the Marietta High School auditorium lobby.