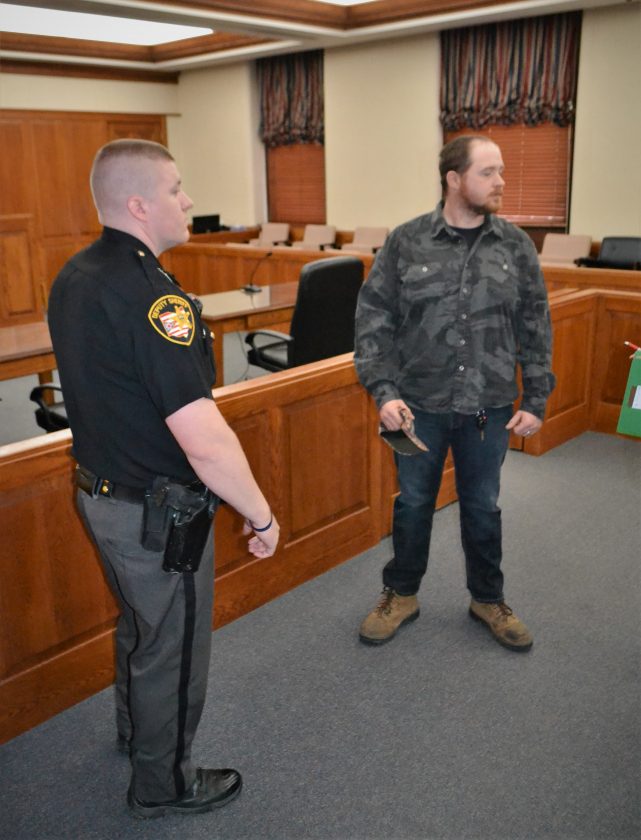 CHAD PLAUCHE-ADKINS The Marietta Times Joshua Fortney waits to be processed by the Washington County Sheriff's Office after his sentencing on Friday in Marietta.

A Belpre man was ordered Friday to spend 30 days in the county jail and two years community control after a domestic violence incident with his wife and daughter.

Joshua Fortney, 33, of 1902 Way Road, Belpre, was arrested on Oct. 21 after Washington County Sheriff’s Office deputies responded to a domestic violence call at Fortney’s residence. Upon arrival, deputies found Fortney’s wife with fresh facial injuries. An investigation revealed that Fortney had attacked his wife then pulled their 8-year-old daughter down the hallway by the hair.

Before the sentencing, Fortney said alcohol played a large factor in his abuse.

“I’ve been sober for five and a half months now,” he said. “I used to drink a gallon of whiskey a day.”

“The victim didn’t want any punishment,” he said.

Retired Judge Randall Burnworth, who is serving as interim Washington County Common Pleas Court judge for John Triplett as he recovers from medical issues, sentenced Fortney to 30 days in the Washington County Jail to be served on the weekends, and two years community control.

Burnworth said Fortney is doing well in the Soberlink program, an alcohol monitoring breathalyzer and recovery management software system used in addiction treatment and family law/child custody cases, and that the court received glowing letters from his new employer about his character. Burnworth made it clear to Fortney that this was his last chance at redemption before he faces significant jail time.

“You’ve had two (domestic violence incidents) with the same victim in the last year or so,” Burnworth said. “You go off the wagon and beat another woman…you will go to prison. Don’t screw this up.”

After the sentencing Derkin said there were letters from multiple agencies in the community attesting to the transition that Fortney has made.

“It was a letter writing campaign,” he said. “There were letters from churches, his employer and Alcoholics Anonymous.”

Even though others felt Fortney’s character was strong enough to receive another chance, Derkin said he still had reservations about Fortney’s future.

“I hope it lasts,” he said. “But the state is still very concerned.”

•Joshua Fortney was sentenced to 30 days in the county jail to be served on the weekends and two years community control.

•On Oct. 21, Fortney was arrested for attacking his wife and dragging his 8-year-old daughter by the hair down the hallway at his residence.

•Fortney blames alcohol as the largest factor in his violence. Fortney says he has been sober since the October incident.

•The court received positive letters about Fortney’s character from his employer, Alcoholics Anonymous and churches.