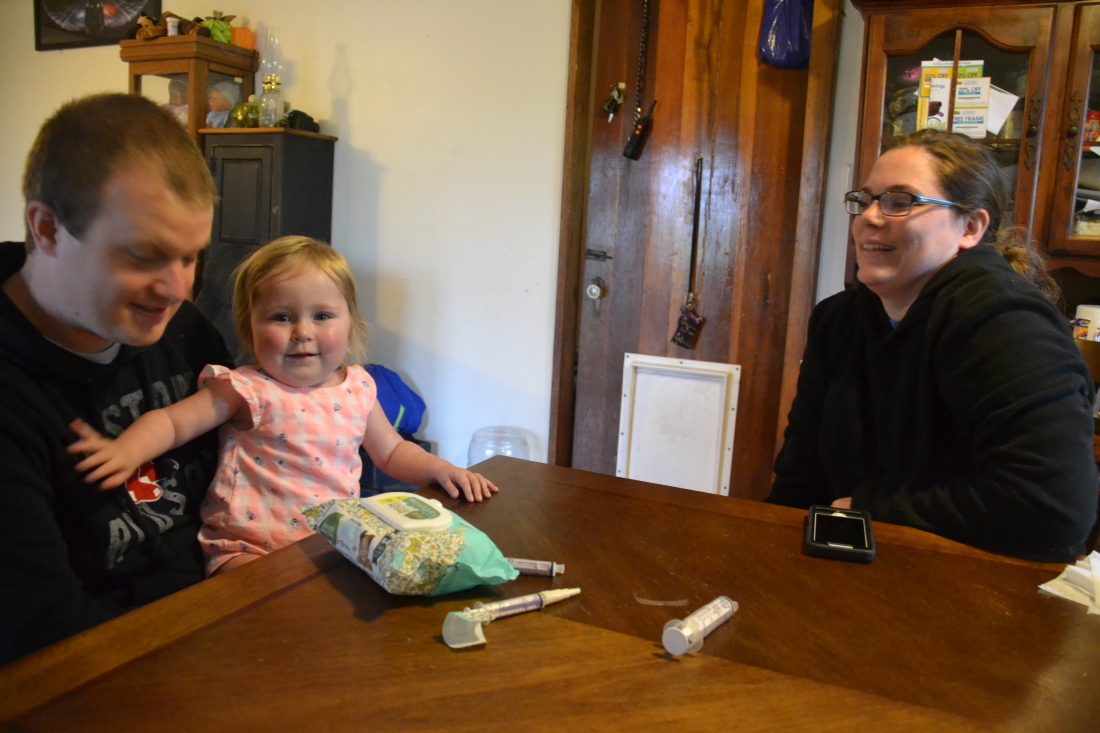 MICHAEL KELLY The Marietta Times Jillian Harlow, 2, sits at the kitchen table with her parents Michael and Deanna Harlow in their Marietta home Thursday. Jillian, 2, was born with a type of congenital heart defect that required surgery and regular trips to Nationwide Children's Hospital in Columbus.

Jillian Harlow sits on her dad’s lap at the family’s kitchen table, sharply eyeing a pouch of wipes and pulling them out one by one with a tart smile.

Other than a slight flush in her cheeks, the 2-year-old in a pink and white checked sleeper has the curious and confident look of any other toddler. Her journey has been far from ordinary.

Jillian was born with a rare heart defect, hypoplastic left heart syndrome. The left side of her heart was underdeveloped and her right lung was atrophied, requiring immediate surgery, with a follow-up procedure when she was 5 months old. The operations were a temporary measure to sort out her blood circulation, and she’ll have another within the next year.

Her father, Michael Harlow, 28, is a campus police officer at Ohio University, making a daily one-hour commute to Athens with his police dog, Brody. Her mother, Deanna, 26, spends her days caring for Jillian and her two boys, Cayson, 4, and Bryson, 6, who started kindergarten in the fall.

Both have become more familiar with the human circulatory system, hospital procedures and the road between Marietta and Columbus than they would have imagined two years ago.

“The left side of her heart is small and doesn’t function properly,” Deanna explained. The surgeries, she said, were to restrict the blood flow to her lungs – the functioning side of Jillian’s heart is the side normally responsible for pumping blood into the lungs – and the second was a shunt to increase circulation to the rest of her body, normally done by the left side of the heart. “It was to build up the right side of her heart,” Deanna said.

The ultimate treatment for the condition, she said, is a double-lung and heart transplant, which probably will take place when Jillian is 10 to 12 years old.

“The surgeries now are buying her time to let her grow,” she said.

The syndrome is uncommon. The Centers for Disease Control and Prevention estimates that fewer than 1,000 children are born with the syndrome each year, about one in every 4,344 births. The cause is unknown. Even so, Deanna said, the family knows of single-ventricle children in Caldwell, Parkersburg, Williamstown and Vienna.

Nationwide is participating in a study on single-ventricle children to determine whether the condition is genetic.

“We’ve given them hair, nail clippings, blood, everything,” Michael said. To date, no genetic cause has been determined.

Jillian’s specialty care – which includes specialists in gastrointestinal and neurological as well as cardiac problems – is done by Nationwide Children’s Hospital in Columbus. Deanna estimates they’ve put in 25,000 miles of driving between Marietta and Columbus in the past year, with an average of about one trip a week. They went there Wednesday because Jillian was retaining fluid at an alarming rate, and they expect to return Friday.

Out of the 24 months since she was born, Michael said, she’s spent about 14 months in the hospital.

“The longest stretch she’s been an outpatient was 40 days,” he said.

Deanna said she’s fortunate to have family in Waterford, where she occasionally stops when returning. The families help care for Cayson and Bryson when they’re out of town.

“The families, we’re very blessed with them,” Michael said. “They’re always there to help.”

When word got around Michael’s workplace that Jillian was a fan of several Disney shows, his co-workers took up a collection to send them to Orlando. Through the hospital and the internet, they said, they’ve found support groups and friends, including a family mentorship program at the hospital and Heart Moms of Columbus, which answers questions through a messaging system.

The hospital also deepened their dedication to the Columbus Blue Jackets hockey team. Not only is the team doing unexpectedly well this year, having knocked out the Tampa Bay Lightning and going into the second round of playoffs with the Boston Bruins, but its center and team captain, Nick Foligno, has a daughter with heart problems and is frequently seen at Nationwide. He and the Harlows have become acquaintances, they said.

Scanning the 14 medications on the kitchen table that Jillian takes daily, and cartons of pre-packaged nutrients she receives through a feeding tube, Deanna said cheerfully that they take the challenge on a short-time horizon.

“She has a long road ahead, and we take it day by day. If you look at the big picture too long, you can get lost,” she said.

For now, Jillian has become something of a local celebrity through the Facebook page, Jillian’s Journey, which features regular posts on her challenges and progress, and occasional fundraising efforts to help the family with the prodigious expenses. A recent event was held at Bob Evans restaurant in Marietta, and a recent post got more than 7,000 likes.

Michael said he sometimes sees people hesitate to come up to the family, even though they recognize Jillian when the family is out in the community.

“We really appreciate their love and prayers, and we encourage them to say hello,” he said. “It gives us a boost when they find us inspiring.”

• Double-lung and heart transplant at age 10-12 years is the only long-term treatment.