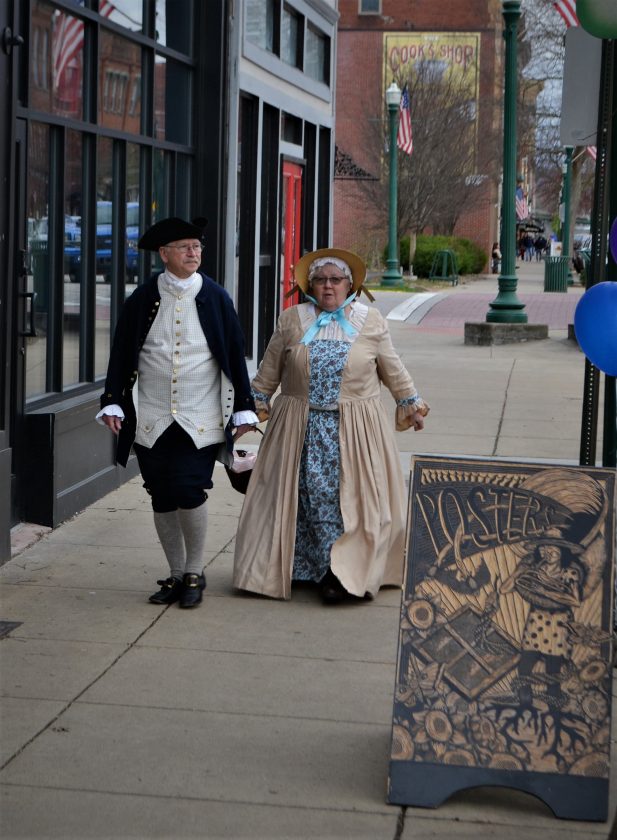 CHAD PLAUCHE-ADKINS The Marietta Times Glen Wolfe and Mary Jo Hutchinson gave shoppers a glimpse into the past on Friday in downtown Marietta.

The warm spring air carried the feeling of celebration through the streets of downtown as Main Street Marietta’s April First Fridays event honored the 231st birthday of Marietta.

“It’s such a nice evening. It’s good to see so many people out,” said Rick Miller of Lowell.

Rick’s wife, Teri, said she enjoyed celebrating Marietta’s birthday on Friday (two days before the actual birthday), but has been an ardent supporter of First Fridays each month.

“We come every first Friday,” she said. “We love going into all the shops and seeing people you never get to see.”

Jonathan Hupp, Safety-Service director for the city, said Marietta Main Street contacted the city in hopes of combining the opening of the court with April’s First Fridays event.

Hupp said everything had been in place, but a problem with the original company that was supposed to install the floor held things up.

“It will be done within a month,” he said.

Once the floor is completed, Hupp said it will complete the restoration project that has been in the works since the city bought the property in the mid-1990s.

“It was perfect timing,” he said. “It’s another reason to celebrate Marietta.”

Mixed in with the shoppers walking down Front Street Friday evening were Mary Jo Hutchinson and Glen Wolfe of Marietta dressed in period clothes from the late 1700s. The pair are members of the Washington County Historical Society, and by suggestion of Marietta College’s Legacy Library, went to the armory to help people get a view into the time when Marietta was born.

With so much history and ambiance available in downtown Marietta, some residents don’t need a birthday to appreciate what the Pioneer City has to offer.

“I love downtown. It doesn’t take a first Friday to get me here,” said Cindy Brown, 63, of Marietta.