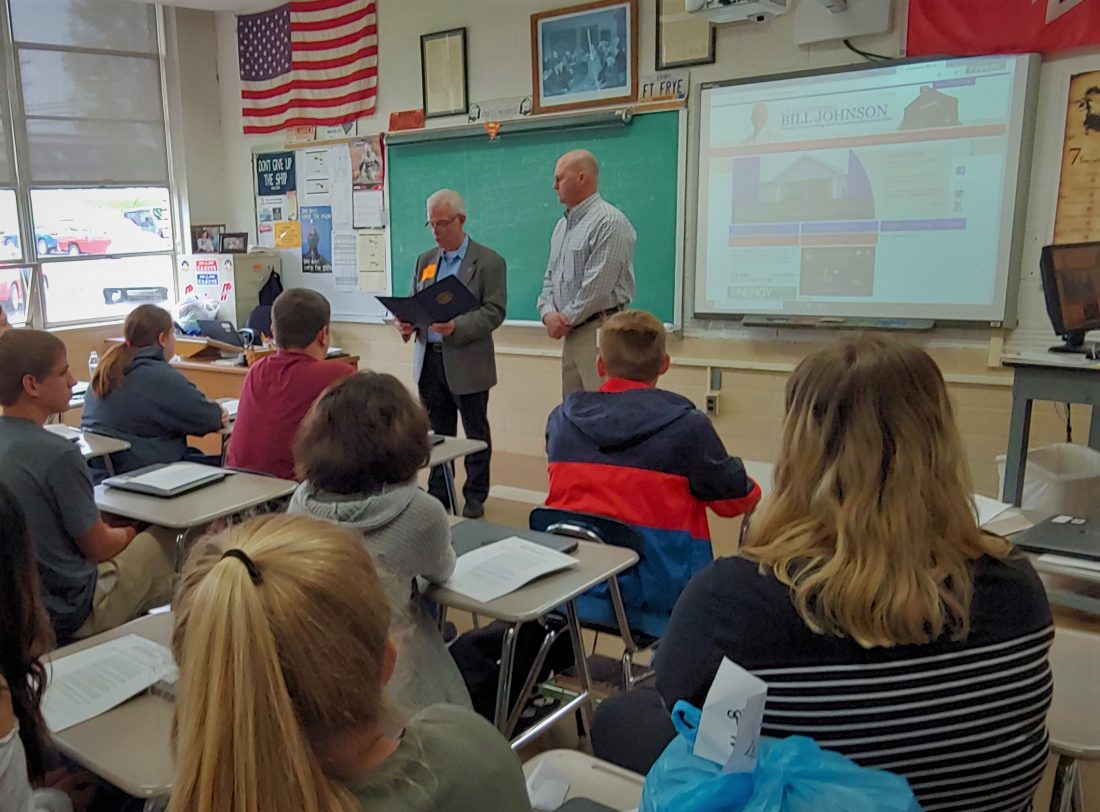 Johnson was first given a tour by Principal Andy Schob before being taken to John Bostic’s American Government class to discuss the role that American youth play in the processes that make up the government.

“Every generation has the responsibility to write the next great chapter in history,” he said.

After noting that almost every student in the class will be eligible to vote in 2020, Johnson said their ability to research candidates and policies via the internet enables them to make more informed decisions than past generations.

If it wasn’t for teachers like Bostic, he may not have been able to attain the success he has had in his life, Johnson said before surprising Bostic by presenting him with a United States House of Representatives proclamation for guiding students for the last 30 years at Fort Frye High School.

Bostic humbly accepted the award, and tried to downplay the significance of his accomplishments.

“It’s just a longevity award. It’s more of a reflection of the kids I have, but I appreciate it very much,” he said.

Bostic said in the last 30 years he has taught not only the parents of some of his current students, but even some of their grandparents. Throughout his tenure, Bostic has coached multiple sports at the school to include football, basketball and softball. He is also starting an alumni database of previous Fort Frye graduates as well as archiving previous sports uniforms and yearbooks so current students can understand the legacy of the school they attend.

Aliyah Potts, a 17-year-old senior at Fort Frye, is in Bostic’s American Government class and said she enjoyed seeing her instructor receive the recognition.

“That made me happy,” she said. “He really works hard for his students and wants them to succeed.”

Classmate Brady Schilling, a 17-year-old junior, said he has been helping Bostic with researching his high school’s past and learned how his teacher is able to juggle all the responsibilities under his watch.

During Johnson’s talk to Bostic’s class, he discussed the people from Ohio who have shaped the state and country into what the students know today.

“You come from a legacy of leaders,” Johnson said.