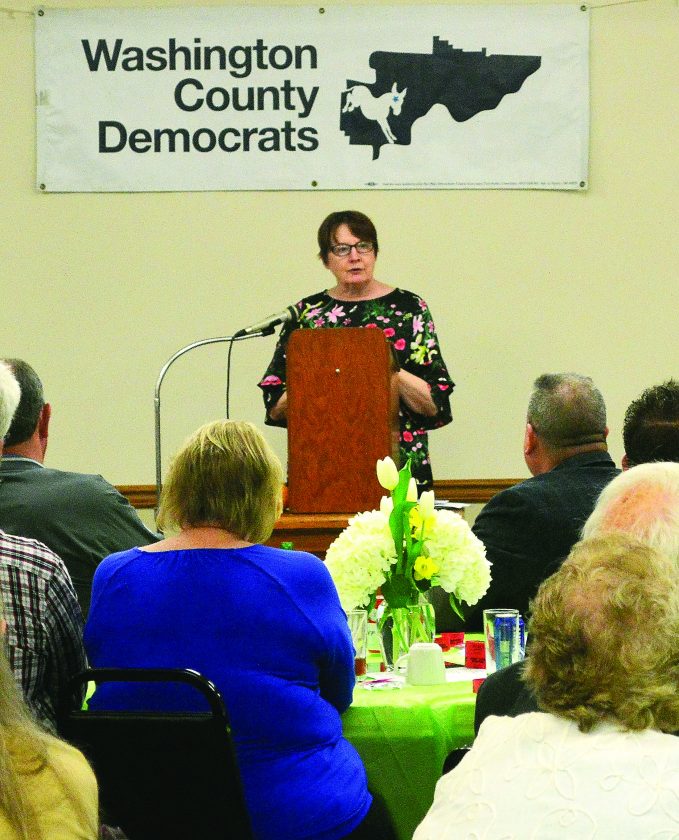 Washington County’s annual Democratic Party Spring Dinner was held Saturday at the Knights of Columbus Hall in Harmar and offered a chance for all of the local Democrats to come together, socialize and meet those running for office.

“There actually is no Democratic Primary this year since the Democratic candidates are uncontested this spring,” said Willa O’Neill, Washington County Democratic Party Chair. “We hope to have a good turnout (Saturday night) and rally the troops. The candidates now can concentrate their efforts on the general election next fall.”

The keynote speaker for the dinner was newly elected Ohio Supreme Court Justice Michael P. Donnelly. He and Judge Melody Stewart now make two Democrats to five Republicans on Ohio’s high court which he believes will start to give the court different ideas and perspectives.

“I love it here. I wanted to come down and thank the Washington County Democrats who supported me,” said Donnelly. “I’m enjoying my new position on the Ohio Supreme Court.

“I’ve begun criminal justice reform which is really why I ran for the position … to be in a place of influence so I could push judicial policy,” he said. “I’m a big proponent to bringing more transparency to the plea bargain policy. I believe that transparency increases public confidence in the courts.”

No stranger to local politics is Harley Noland, a four-time at-large Marietta City Council member who is now a Democratic candidate for mayor of Marietta.

“I’ve been on council for four different terms and enjoyed a Democratic majority for three of those terms,” said Noland. “If we an do that again and I become mayor, we can do a lot of things.”

Noland said during his time on the city council, a lot was accomplished, including the new municipal court, the armory, increasing acreage for parks, the bike trail was enlarged and also the sewage treatment project.

“We accomplished a lot,” said Noland. “The main thing that I want to put into city government is good long-term decision making. A lot of our infrastructure is wearing out. Without a long-term plan, you have to knee-jerk things and that’s too expensive.

“We are the pioneers of the future and I think that the citizens expect a great deal from their leaders of this government,” continued Noland. “The vision of the future is to find good paying jobs so our youth don’t have to leave the area. We have to enrich our tourism industry and we have to keep our quality of life … good, clean water and air and good infrastructure.”

Local funding sources have changed drastically. Because of that, Noland said it is imperative to find more ways to do things smarter, less expensively and more efficiently.

In Belpre, Mayor Mike Lorentz is running for re-election.

“I’ve been in some sort of elected position in Belpre for 28 years,” said Lorentz. “I’ve been on the school board, city council and now mayor. I’m now running for my fourth term as mayor.”

Lorentz pointed out that there has been quite a bit of business activity the past few years in Belpre. Economic growth includes the Memorial Health System, Fresenius Kidney Care, Taco Bell and Belair’s Restaurant just to name a few.

“There’s been about 400 new jobs added in the past four years,” he said. “Every time we stick a shovel in the ground, I get excited.”

There are several Democratic city council candidates in Marietta up for re-election and one running for the first time.

Former Washington County Common Pleas Court Judge Susan Boyer is no stranger to the Spring Democratic Dinner, but this year she is a candidate for at-large city council.

“I’ve been retired now for about five years and decided that I needed to do something where I could be more of use and I think I could do a great job,” said Boyer. “I’m a little rusty, I haven’t done this in a while. This is more intrinsically personal. I like it.”

“This dinner is fun,” said Kathy Downer, another at-large city council candidate that is running for her third term in Marietta “There is a lot of energy. You’re in a room full of people that are very supportive.”

Downer said (the city) doesn’t have a lot of money and leadership is the solution to that. She said that they need to pay attention to preventive maintenance on things like city streets and find new ways to get money such as grants.

Running for 4th Ward re-election is Geoff Schenkel who says the council is working on economic development and a more comprehensive approach to downtown improvements.

“This is the 10th year,” said Thomas, who is the Police and Fire Chair. “We’re hoping to get a new fire truck in the next few months. We’ve waited for it a long time.”

Mike Scales, 1st Ward City Council member, said their finances are in order and they are making progress taking care of the blight. That is what he is excited about. Plus, he said they always need to take care of the police and fire departments as well as water, sewer, streets.

Rounding out the local Democratic lineup is Mike McCauley running for Marietta’s 2nd Ward and Tom Webster running for Belpre Law Director. Also attending the dinner was Shawna Roberts who announced that she will be running again for the 6th U.S. Congressional seat in 2020.

“I have five kids and I want them to be able to stay in this region, get jobs, thrive and prosper,” said Roberts. “I don’t see enough being done to make sure that is going to happen. I worry about the focus on oil and gas. I don’t see them being a dominant force forever. As technology gets better, sustainable energy sources like wind and solar will take over. If we don’t keep that in mind, we will get left behind.”