Oliver Tucker Museum in Beverly will receive a historical marker 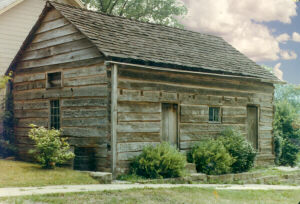 Photo courtesy of the Lower Muskingum Historical Society The Oliver Tucker Museum includes both the former home of Tucker and a log house built in the late 1700s.

On Saturday, Beverly’s Oliver Tucker Museum will be granted a historical marker, something the Lower Muskingum Historical Society made a goal nearly 20 years ago.

The museum features a home built in the early 1850s by Beverly founder John Dodge and a log house built in 1798, as well as varied exhibits.

Historical society researcher Phillip Crane, 70, of Waterford, has been well-acquainted with both for many years. He even led the re-building of the log house in the ’70s when it was relocated to the museum site.

Crane, a retired Social Studies teacher, said he has “dug deep” into the research of the buildings, and has still been discovering documents in recent years.

“The Mindlings, who lived in the log house in the 1880s, left some very good records,” he said. “George W. Mindling, who went on to become the head of the Ohio Weather Bureau, left a floor plan and told what each room was used for. He was alive when we relocated it, so we could even go to him for questions. One of the Mindling descendants toured it and said it was just the way they remembered.”

Crane will be on hand Saturday as the museum receives its honor.

Question: How long have you been working with the historical society?

Q: How is your membership?

A: We have about 210 members, which we feel is pretty good. A lot of those are lifetime members and some are complementary members. We have about 10 people who are really active.

Q: How long have you been working to get a historical marker for the museum?

A: This has been in the works since 2000. We had applied to the Ohio Bicentennial Commission (which would have paid for the marker). They approved Round Bottom instead of us. So, this is completely paid for by the Walker Fund. Dr. Richard Walker wrote a booklet called “Sandusky-Muskingum Indian Trail” and we sold the book until we raised $3,000.

Q: How much did the marker cost?

A: It was $2,785. The rest of the money paid for refreshments for the dedication.

Q: Why was it important that this site have a historical marker? What makes the museum special?

A: We have the old log house. It’s also special because we have many exhibits that other museums don’t have, like an old-time doctor’s office. We have many items of Oliver Tucker, who was a hardware merchant in Beverly and the second president of Citizens Bank. He was a very prominent person. His granddaughter donated the home to us.

Q: Do you get a lot of visitors from out of town, as well as local residents?

Q: What will it mean for you to see the marker there?

A: It will call people’s attention to the museum. It gives a history and a history of the old log house, which has a very interesting history. We call it the only completely hand hewn log house that is a museum in the Northwest Territory. It’s very historic although it was moved.

Q: Where was it originally built?

Q: What all had to be done at that time?

A: I had to dismantle it, label all the logs so they wouldn’t be out of order and we moved it to Beverly on a lowboy. We erected it over two summers. I was teaching school at the time so we had to work in the summers. I had over 50 students who helped restore it, from Beverly, Waterford and Marietta. I was teaching at Waterford when we started and then I moved to Marietta and a lot of students were interested in it. We hope that some of those people will join us at the ceremony.

Q: What will be included in the event?

A: We’ll have a membership table set up at the dedication. We’d like to get more lifetime members. We’ll have refreshments–cookies from Lisa’s Sweet Stop and punch. We’ll have an open house afterward with tour guides, and we’ll have the marker that Sewah made. We’re very pleased with it. I think it’s a pretty important day.

¯ What: Ceremony to dedicate the historical marker for the Oliver Tucker Museum.

¯ Where: At the museum, 401 Fifth St., Beverly. Rain location is the old gym at Fort Frye High School.

¯ Includes: An open house and refreshments.

¯ Regular hours for the museum are 1 to 4 p.m. Saturday and Sunday from June-August.