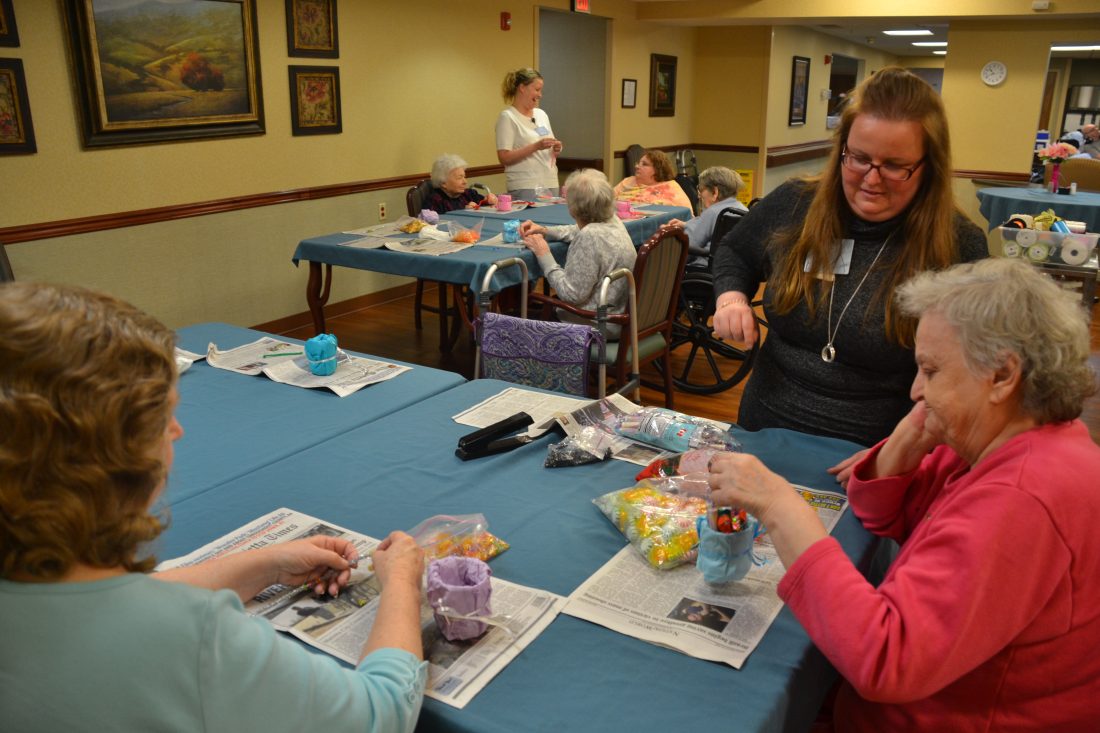 MICHAEL KELLY The Marietta Times Rachel Jones helps Maxine Rounds, right, and Georgia Dye on a craft project Wednesday morning at Harmar Place in Marietta as Rachel Strauss laughs with another group of residents at the skilled nursing facility. May 13-17 is National Skilled Nursing Care Week.

At Harmar Place, eight residents of the skilled nursing facility gathered Wednesday morning for a bit of creative work, making candy dishes out of recycled water bottles. It’s National Skilled Nursing Care Week across the country, and although many facilities are marking it with special events, an hour of craft-making is nothing out of the ordinary for the people who live at the Marietta facility.

In the afternoon, a session making baked treats for the animals at the Humane Society of the Ohio Valley shelter was held, and in the evening entertainment was offered after dinner. A local saxophonist and singer performed.

Staff members Rachel Jones and Rachel Strauss pulled spools of ribbon and sheets of colored crepe paper off a wheeled cart as the eight women began their decorating work.

“What color ribbon would you like with yours?” Jones asks one.

The water bottles, their tops sheared off to form a bowl, are covered with crepe paper and decorated with ribbon. A pipe cleaner sprouting glitter is threaded with beads to form a handle, which is stapled on as the finishing touch.

Strauss peels a foot of silver ribbon from a spool and cuts it off while Jones carefully helps Maxine Rounds thread beads onto a pipe cleaner.

Across the U.S., according to Centers for Medicare and Medicaid listings, more than 15,000 similar facilities provide care to Americans, most of them elderly. They are primarily residential homes for those who need nursing care and also provide post-procedure medical rehabilitation for people who need short-term care, generally defined as less than 100 days.

Sue Boulton, the administrator at Harmar Place, said the facility now has 86 beds and has grown over the years to meet the increasing demands of an aging population.

“We have a long history here, it was first built in the 1960s and included the house on the hill,” she said, referring to The Anchorage, a historic residence that is now under restoration and located just behind Harmar Place. Additions came in 1994 and 2004, expanding the original 50 beds to its current 86, of which 23 are short-term.

“Evelyn, do you want to hold this for me?” Jones said in the background, then stapled the beaded pipe-cleaner handle to the dish, finishing the project. She poured candy into it as the facility’s mascot, a black standard poodle named Sylvi, watched quietly.

Boulton has been in nursing care since 1980 and an administrator since 1987. She said the profession has undergone substantial changes since then, mainly driven by state and federal policy, and nearly all for the good.

“It’s person-centered care now, we’ve gone from running institutions to creating a home for people,’ she said. As an example, Harmar Place is divided into four “neighborhoods,” areas that include their own kitchen, dining room and living area to give the facility a less institutional feel, she said. Activities keep the residents active and help make their lives interesting. Musicians, all volunteers, come by regularly.

“We have a music and memory program that helps people connect with their youth and their past, it has a calming effect,” Boulton said.

“Yesterday we had line dancing,” Jones said. “And karaoke – you should see our karaoke.”

Source: Centers for Medicare and Medicaid.