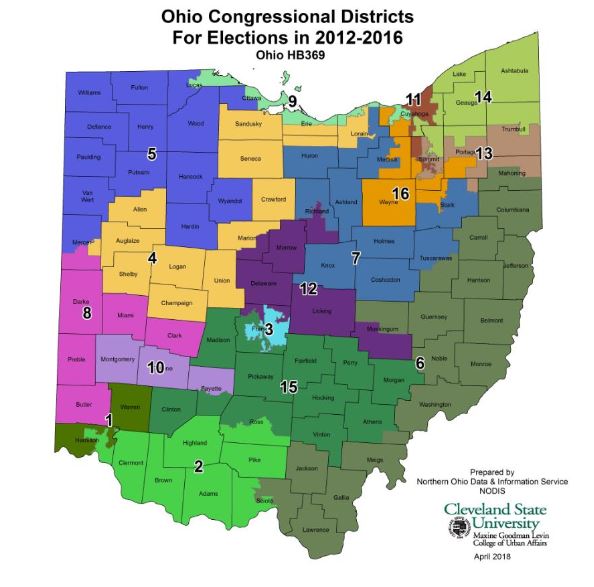 As matters now stand, voters in Ohio’s Sixth Congressional District, which in a long, narrow sweep of the Ohio River Valley extends from Ironton to just south of Youngstown and includes Marietta, might have a district that looks somewhat different on the map for the 2020 election.

A lawsuit brought by a host of parties that included the Ohio ACLU and was decided by the U.S. District Court of Southern Ohio, Western Division, has ordered the state to revise the electoral map of the state that has been in effect since the 2012 congressional election. The three-judge panel which decided the action found that the plaintiffs were correct in arguing that the map was gerrymandered, engineered to suit the Republican Party at the expense of representative elections.

The decision was appealed immediately by the state and will ultimately go to the U.S. Supreme Court, but a motion to stay the existing order was denied May 9 by the federal judges, meaning another map has to be in effect by Sept. 20 unless the Supreme Court overturns the decision before that date.

“There’s a long way to go with this. The current map was a bipartisan effort in 2010, and I think the court got it wrong. It’s under appeal to the Supreme Court,” he said. “But I love the district I represent, and I will represent whatever district I’m presented with, no matter what the issue. My goal is to be the best representative I can for the people who live in it.”

The lawsuit argued that the map now being used was crafted to deliver 12 of Ohio’s 16 congressional districts to Republicans nearly regardless of the state’s overall vote, which has happened in every election since then. The district court agreed with the plaintiffs’ arguments, stating in the summary of its order and opinion:

“In 2011, when Ohio’s redistricting process began, Republican dominance in the Ohio State government meant that Republican state legislators could push through a remarkably pro-Republican redistricting bill without meaningful input from their Democratic colleagues. Ohio Republicans took advantage of that opportunity, and invidious partisan intent–the intent to disadvantage Democratic voters and entrench Republican representatives in power–dominated the map-drawing process. They designed the 2012 map using software that allowed them to predict the partisan outcomes that would result from the lines they drew based on various partisan indices that they created from historical Ohio election data. “

The lawsuit noted egregious instances such as District 9 which runs in a narrow pathway along Lake Erie from Cleveland to Toledo, and District 11, which runs in an irregular dribble from the Cleveland suburbs down to Akron.

The electoral map will be statutorily redrawn after the 2020 census for the 2022 election, but in the meantime the court asserted that the constitution demands that a fairer map be used in the next election, November 2020. The ACLU noted in its complaint that in the 2012, 2014 and 2016 federal elections, Ohioans voted from 37 to 49 percent in favor of Democratic candidates for congress, but in each election 75 percent of the seats went to Republicans.

Shawna Roberts, the Belmont County Democrat who ran against Bill Johnson for District 6 in November 2018, has been watching the map-making litigation with interest, because she means to run again.

“For this area, for the Sixth District, the gerrymandering wasn’t as severe as some other places. For those places, I think changing the map is going to make a big difference,” she said Wednesday afternoon. “Here, we have very conservative voters who are voting Republican, so it’s not going to be a huge change for us. I’ve seen several proposed maps, and none of them will significantly change the vote here.”

The Sixth District changed slightly when it was modified in 2011 by carving Athens out. Roberts said the vote was more competitive before that.

“They made it into a safe Republican district, they wanted to make sure they got the same result every time across the state – and they did, they were geniuses, they were brilliant in an evil sort of way,” she said.

Roberts said she believes the key to any Democrat success in the area will be changing people’s minds, not the map.

“It’s less about the map than it is communicating with people, helping them understand that the Democratic platform is better for workers in this area. They have the notion that Republicans are more in line with their social ideas, their identities, and they vote against what is actually helpful for them.”

Roberts said she thinks changing the map will overall have a beneficial on the election.

“With any luck, we’ll have more toss-up districts, and that’s better for people,” she said. “Both parties have to be closer to the center, compromise a little, pay more attention to people than they do to their party. In a sense, nobody will be an incumbent if all the districts change, there will be places in the new districts where nobody’s heard of you, you’ll have to run like it’s your first time. There will be more interest in people running, it will be like an open seat. We’ll get new people, new ideas.”

Although Roberts already is registered to run as a Democrat, she won’t know for a while which district she’ll run in. The state legislature needs to submit one or more proposed maps to the district before June 20, otherwise the court will draw the map itself.