Data will be shared with Congress 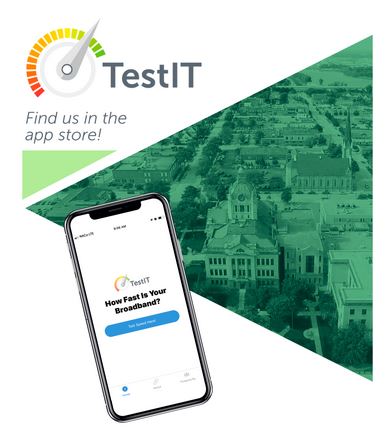 The National Association of Counties TestIT app is available for download on either android or iPhones.

Anyone who has spent time in Washington County knows the cell phone service varies from adequate to nonexistent. Now a political action organization representing counties across the nation has launched a tool to map service and measure signal strength, hoping to get some action from Congress and the telecommunications industry for underserved areas.

TestIT is an app that can be downloaded at no cost from Google Play for android phones or the Apple App Store for iPhones. When activated, the app measures wireless availability and signal strength in the user’s location and transmits the data to the National Association of Counties. The organization hopes to come out with an accurate map of broadband coverage and strength across the country.

The test takes only a few seconds and displays upload and download times benchmarked against FCC standards. A test at The Marietta Times office on Channel Lane in Marietta, for example, on Tuesday afternoon showed a download strength of 41.3 mbps (megabytes per second) and upload strength of 8.81 mbps. The FCC benchmarks are 25 mbps download and 3 mbps upload, so the strength was above the benchmarks.

Other areas of the county, and even the city, are not so fortunate. A measurement taken in Norwood Monday night, for example, showed download speeds below 20 mbps. Some areas outside the city have no service at all.

Jason Pyles is the GIS coordinator for the Buckeye Hills Regional Council, and he welcomes the TestIT project.

“Everything we know about broadband strength is witness accounts because the companies aren’t really willing to give up that information, which is why this is really important,” he said. “In 2014 ConnectOhio got access to some pretty detailed information, but five years is a pretty big gap.”

Pyles said the county essentially has only one carrier in its eastern half, and the areas where two or more carriers operate are only along major thoroughfares such as I-77, Ohio 7 and U.S. 50.

“It definitely makes business development difficult if you don’t have broadband or if it’s weak, which is why it’s important to capture speeds,” he said. “It’s great if coverage exists, but you can’t know if we’re getting the speeds we need without testing it ourselves.”

Which is where the app comes in – now NACO just needs a sufficient number of people to download it and provide the testing data.

“We want to be able to show where funding is needed for underserved areas,” NACO’s Paul Guequiree said Tuesday. “We’ll use the results to advocate for adequate funding to Congress, for the places that need help.”

Guequiree said the project was launched in early March, and by mid-April, 7,300 users had installed the app and downloaded 38,000 tests.

“We’ve heard from counties across the country that more needs to be done to assure that infrastructure is there, that we’re creating an equal playing field. In today’s society and economy, access to broadband and internet is absolutely essential,” he said.

U.S. Rep. Bill Johnson, R-Ohio, the congressman for Ohio’s Sixth District, said he welcomes the idea of having concrete data to present in his efforts to improve telecommunications infrastructure in the area.

“In a meeting last week with the chairman of the Federal Communications Commission, I expressed my frustration that we’re not making more progress in broadband expansion,” he said.

Johnson said the budget proposal from the Trump administration includes $20.4 billion for broadband expansion, and he would prefer to see unserved and underserved areas given priority for that.

Johnson said local governments also have a role to play and could start by streamlining the permitting process.

“Some of the responses (to broadband expansion proposals) I’ve seen are shocking, they’re seeing this as a revenue opportunity with fees and taxes, while others are almost willing to pay for companies to come in with expansion,” he said.

Johnson also said there might be opportunities for granting licenses in what is known as the educational broadband service frequencies, which could be given to libraries and public entities and offer service in about a 10-mile radius of the installation.

“We have made efforts to identify locations where infrastructure could be installed without the cost of building towers, such as existing towers, even water towers, to reduce the cost,” he said.

Guequiree said the NACO hasn’t placed a time limit on acquiring the data.

“We’re looking at numbers already, but we haven’t set a time frame for this,” he said.

• Created by National Association of Counties to map broadband strength and access across the country.

• Data will be used to lobby for better wireless and internet coverage.

• Download for free at Android App on Google Play or from the App Store.