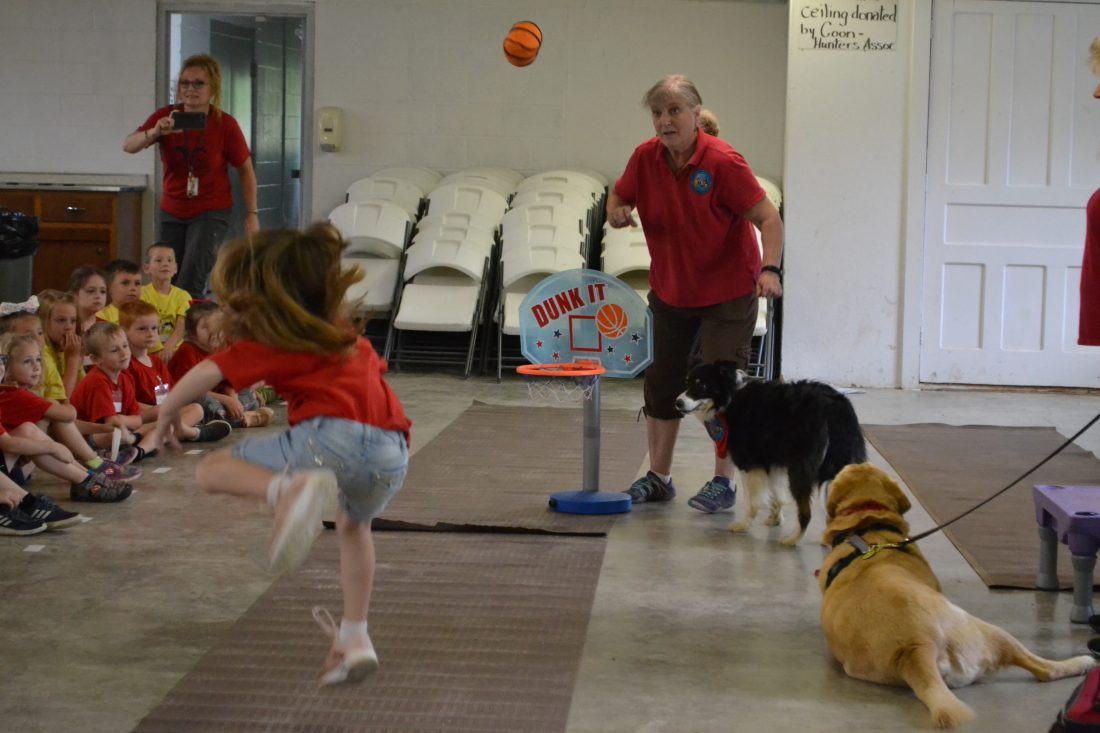 BARLOW–For 25 years, youngsters in the Warren Local school district have been gathering to learn about safety as part of a week-long Barlow-Vincent Safetytown.

“We teach them several things about safety, from farm safety, stranger safety, swimming safety, bike safety and fire safety,” said Tara Anderson, co-founder of the local program and kindergarten teacher at Warren Elementary School. “Those are the five main themes of the week. But there are many other things we plug in.”

She said the program has help from the 4-H program at the OSU Extension office, the Washington County Sheriff’s Office and the Ohio State Highway Patrol.

Fifty children graduated from Safetytown Friday morning at the Barlow Fairgrounds. For the past 25 years, there have been at least 50 students per year, with more kids added to a waiting list.

The Barlow-Vincent Safetytown was co-founded by Lisa Mayle, who is a sixth grade teacher at Warren Middle School.

On Friday, the students got to see dogs doing tricks, showing them how dogs can be trained. Afterward, they learned how to be safe around strange animals.

“They learn how to approach dogs safely and how to take care of their pets, whether it’s hot or cold,” Anderson said.

The children learn how to approach dogs with their hand in a fist instead of “just running up to a dog with all this energy,” Anderson said.

Safetytown is for children who are coming into kindergarten through first grade at Warren and Little Hocking elementary schools. Approximately 1,625 children have graduated from the Barlow-Vincent Safetytown over the 25 years.

The students rotated through different stations each day so they could get information from each group. For instance, they learned tractor safety from the Farm Bureau on the first day, but they also got to learn how to approach and take care of baby animals.

When they are taught about “stranger danger,” “it’s one of those things that goes throughout (the program),” Anderson said. “When you don’t know, don’t go. They learn that a stranger could look like anybody. This is what you do if someone were to try to take you. We taught them all kinds of techniques.”

During the swimming safety day, the kids were taught to always swim with a buddy.

“We have a local lifeguard come in,” Anderson said, noting they also learn about life jackets and buoyancy.

“If you are on boat, you could throw in a cooler and they could grab on that,” she said. “An empty milk jug could be held onto until you got help.”

Young children should always be by a pool with an adult, but just in case “your little brother or sister falls in,” they learn to use a pool noodle or broom to help them get out of the pool safely, she noted.

Bike helmets were the focus of bike safety. A presentation shows the students what safety equipment should be on their bikes, such as reflectors, and to always wear sneakers so their toes don’t get caught.

Fire safety is one of the bigger draws for the kids. They learn never to play with matches or lighters and members of area volunteer fire departments show them four stations. They get to see the fire equipment and water truck. They also get to hold the water hose and feel the water pressure.

And the children get to ride on the truck and the ambulance, Anderson said.

“I would say this day is the best day. It’s a big one. We are packed,” she added.

As there are so many students who go through Safetytown, they are assigned “buddies,” who are children fifth grade and older from the school district. Every buddy has two Safetytowners and are with them the entire week. Anderson added that most of the buddies were former Safetytowners.

Along with the five main subjects, the youngsters learn about electrical safety, poison safety and playground safety.

“There’s a theme for each day,” Anderson said.

The Washington County Sheriff’s Office had a station during the week where the children learned about law enforcement. Deputy Justin Sheaves helped at Safetytown by himself for the first time this year.

“What I teach, I touch on the stranger sanger from what they learned earlier. I show them how our uniform and stuff keeps us safe. They get to explore our sheriff’s cruisers,” he said.

He said they also did IDs for all the participants.

The students were particularly excited about the things they were taught this week.

“I learned fire safety and to be careful with strangers,” said 5-year-old Colton Heddleston of Fleming. “I liked riding the fire truck and my bike best.”

Riding bikes was also a big hit for Aiden Eddy, 5, of Marietta.

“I learned fire safety, bike safety and stranger danger,” he explained. “And be careful on the farm. But I liked riding the bike best.”

Beverly-Center Elementary and Belpre Elementary’s Safetytowns also wrapped up this week, while the Samuel L. Cook Safetytown at Harmar Elementary will be held June 17-27.