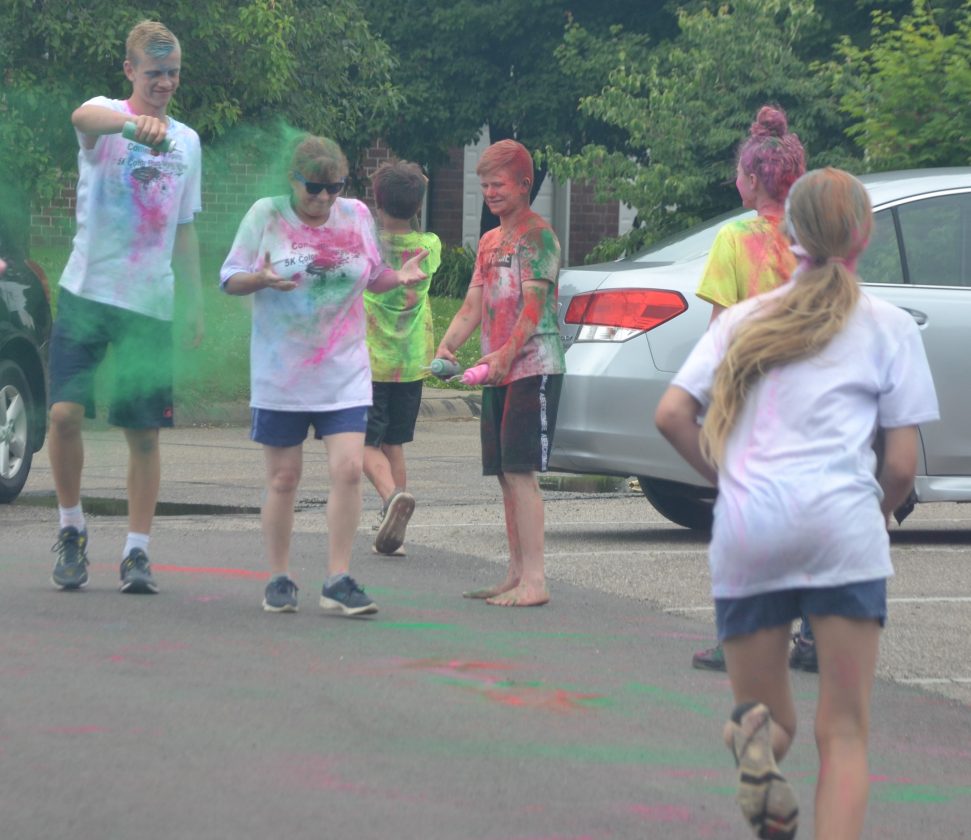 BRETT DUNLAP Special to the Times Some of the finishers in Sunday’s Color Run 5K got doused with additional dye powder when they crossed the finish line. Many families came out and did the run together.

WILLIAMSTOWN — People from around the area got to show off their true colors as they helped raise money for an accessible playground at Tomlinson Park in Williamstown.

A 5K Color Run was organized by the Community Spirit Youth program with the goal of raising money to help purchase the specialized playground equipment for the park.

The project has been underway through the Williamstown Lions Club, the MOV Spina Bifida Foundation and others who teamed up with the youth group to help put this event on.

The first Color Run had around 30 participants and volunteers. Those involved doused themselves and others in color dye powder and then ran five kilometers around the Williamstown area. Organizers are hoping to make it an annual event.

The youth of the group came up with the idea to do the Color Run in Williamstown to raise funds to purchase accessible playground equipment in Tomlinson Park so many different people can enjoy time outdoors.

The Community Spirit Youth program is affiliated with the First Presbyterian Church of Williamstown and serves youth, ages 12-18. The program was created to teach young people about life skills and giving back to the community.

“We created a youth group with mentors,” said Missy Rickard, one of the event organizers. “We teach them to give back to the community and that was how this was created.

“They choose to do this as a community service project to help get accessible equipment for the playground that everyone could enjoy.”

Organizers estimated they made between $350-$450 on Sunday with that money going to the playground equipment.

“The kids are helping to raise money for the playground equipment,” said Jay Houser of the Williamstown Lions Club “Every bit will help.”

The plans are to start with one swing that can hold a wheelchair and expand from there with more equipment as funding becomes available, he said.

“Each year we want to buy a new piece of equipment,” Houser said.

For many who came out, the Color Run was a chance to get out and do something on Father’s Day.

“It was something we could do as a whole family,” said Bobby Brogan of Vienna. “My wife and three kids are here.

“This was something we could all do together.”

He participates in some running events locally, including the Chick-Fil-A 10K run that occurred last week.

“This is the second run I have done this year,” Brogan said.

He didn’t even know it was a Color Run.

“I just thought it would be something fun to do on Father’s Day,” he said.

His son, Tristen, said they could have gone to see a movie, but they decided to do the run.

Ben Winn, of Vienna, said it was his kids and Father’s Day that brought him out Sunday.

“It is just a good community event for the kids,” he said

He doesn’t participate in a lot of runs and no one was keeping time on Sunday.

“This was just something have fun with the kids,” Winn said.

The next event to help support the playground project will involve the Williamstown Lions Club raising money and flying American flags from June 29 through July 7 and Nov. 9-16.

The club’s goal is to blanket Tomlinson Park with 200 flags during the Fourth of July holiday.

Proceeds will support handicapped and wheelchair accessible playground equipment in the park. Each flag will have a commemorative tag with the honoree’s name.