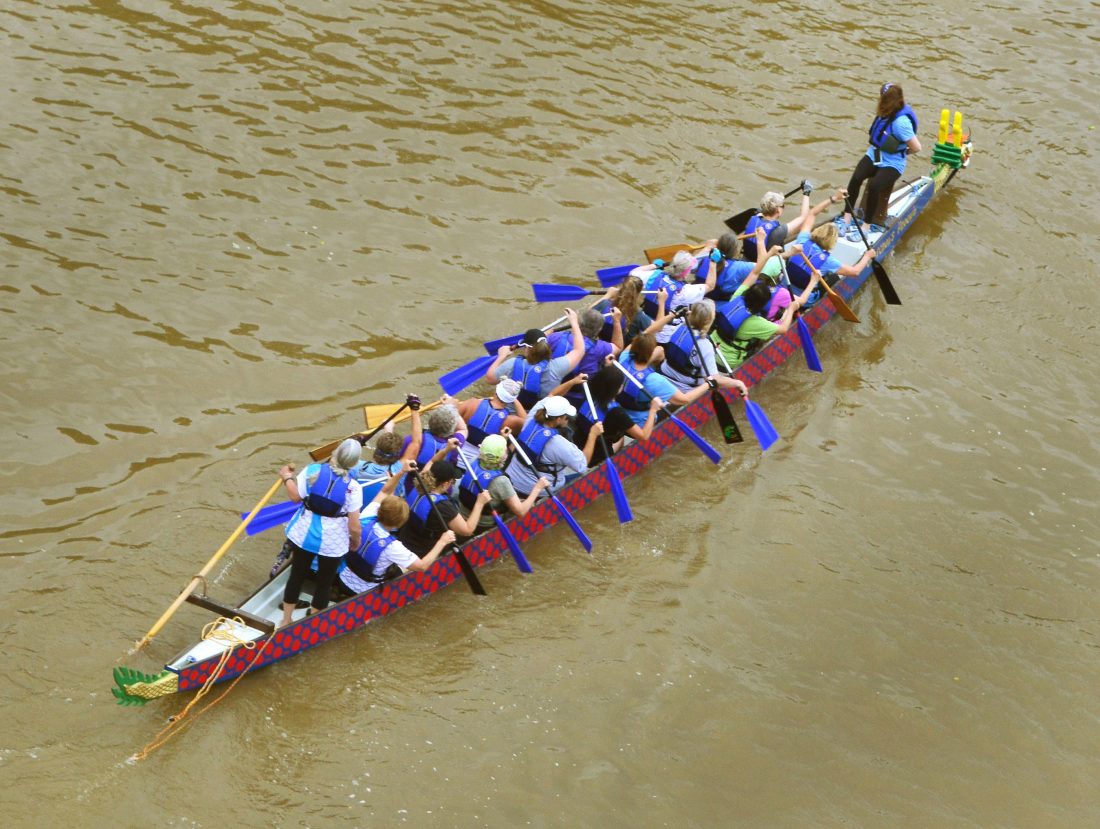 DOUG LOYER Special to The Times A birds-eye view shows the group working well together.

Thirteen new paddlers took to the water Saturday with hopes that many more participants will experience these free dragon boat adventures throughout the summer.

“These excursions are a community service project to allow people to experience the Muskingum River from a dragon boat. They’ll learn a little bit about the Muskingum River and its environment, Dragon boating and have a really good time,” said MJ Ebenhack, co-chair of the MOV’n Dragons Community Outreach Committee.

Ebenhack explained that the MOV’n Dragons Organization was the inspiration of Gretchen Feldmaier, an accomplished local woman who was a devoted wife, mother, grandmother, friend, mentor and educator. Feldmaier developed breast cancer and because of her love of dragons and of the river, it was her dream to have a dragon boat in Marietta.

Through the Marietta Community Foundation, Feldmaier’s dream became a reality in 2006. The MOV’n Dragon’s 40 foot long, 22-seat dragon boat was appropriately named “Gretchen’s Phoenix” in memory of her. A second 10-seat boat was added later that is called the “Dragonfly.”

Dragon boats go back thousands of years and came out of China. Dragons have a special meaning in Chinese culture representing strength, prosperity and longevity.

An international movement was inspired by the research of Canadian sports medicine specialist Don McKenze. By paddling dragon boats, his research found that breast cancer survivors benefited from the upper body exercise and socially supportive aspects of the team sport.

“We all know Gretchen’s history and many of us can associate with that,” said Denise Highland, president of the MOV’n Dragons. “I am a breast cancer survivor and I have an emotional connection with this group.”

Highland said the group, now up to 44 members, is not just for breast cancer survivors anymore. There are probably more people that are not cancer survivors now. She said they have evolved since the beginning and have opened it up to everyone. On Saturday they were trying to get people interested. They want people to know that MOV’n Dragons is there and everyone is welcome.

Describing what it’s like being in a dragon boat on the river, Highland said “You’re with a group of supportive people that you connect with and being on the water has a calming effect and it’s a rush all at the same time.”

“I love this. It is my passion,” said Excursion Leader Cathy Rees. “You can do this just to get on the water and get some exercise or if you want to get competitive, you can do that, too. It’s for everyone depending upon your level of skill or interest.”

For the more competitive MOV’n Dragons paddlers, they have a competitive Womens team that goes to three or four events each year. Next week they will be in Buffalo, in July they’ll travel to Akron, Chautauqua in August and in September, they’ll compete in Kentucky.

Rees said the 20 dragon boat paddlers are divided into three sections. The front section of the boat is called the “Stroke” and is responsible for pacing. The middle of the boat is referred to as the “Engine” which usually consists of strong paddlers that propel the vessel. The back section is called the “Turbo” which deals with the current and a lot of water. Those paddlers require good timing.

“I went to a fundraising dinner that they had and learned about what the MOV’n Dragons is all about,” said Melissa Standish, who moved to Marietta from California about a year ago. “When I found out it was on the river, it got me interested. I’m a swimmer anyway and I love water.

“It’s great exercise. It’s good for your arms, shoulders, abs and legs,” continued Standish. “The ladies are absolutely wonderful. This is also a great way to meet people. They have functions that I go to. I just went on a retreat with them. It was awesome.”

“We had a good time. I had no idea what to expect,” said Jennifer Sisson, of Parkersburg, as she was getting out of the boat after finishing her dragon boat excursion Saturday.

Sisson, a recent cancer survivor, just finished her last chemo in April. She heard about the MOV’n Dragons for the first time at the Strecker Style Show. She could tell it was a really cohesive and supportive group.

“This was a good workout but not too strenuous,” said Sisson. “You had to use concentration for what we were doing, but being on the river was calming. It was a perfect day for this.”

“My daughter and I do stuff all the time and we like doing different things,” said Kathleen. “I do like kayaking occasionally, but this was different. I’d like to do more of this.”

“Mom found out about this on Facebook and we were excited to give it a try,” said Kelsey. “It was pretty fun and we had great weather for it.”

“Everyone got the hang of things and it went well,” continued Kelsey. “At one point, I felt like we were going pretty fast. Everyone was so nice, helpful and encouraging! I would absolutely do this again.”

Kandy Matheny, of Marietta, said there was a great camaraderie and it made her feel good how everybody worked together as a team and really liked the refreshing feeling of being on the water.

It was the first time being out on the Muskingum for Rachel Coutermarsh, of Waterford.

“It was therapeutic for me,” she said. “It’s relaxing and healthy for the mind. I’ll have to do that more often.”

There will be five more Muskingum River Dragon Boat Excursions this summer at the Marietta High School Boathouse on Saturdays from 9-11 a.m. The future dates are June 22, July 13, July 27, Aug. 3 and Aug. 24. The program is free and no experience is necessary. For more information, call 740-434-5638, visit MOVdragons.org or Facebook.