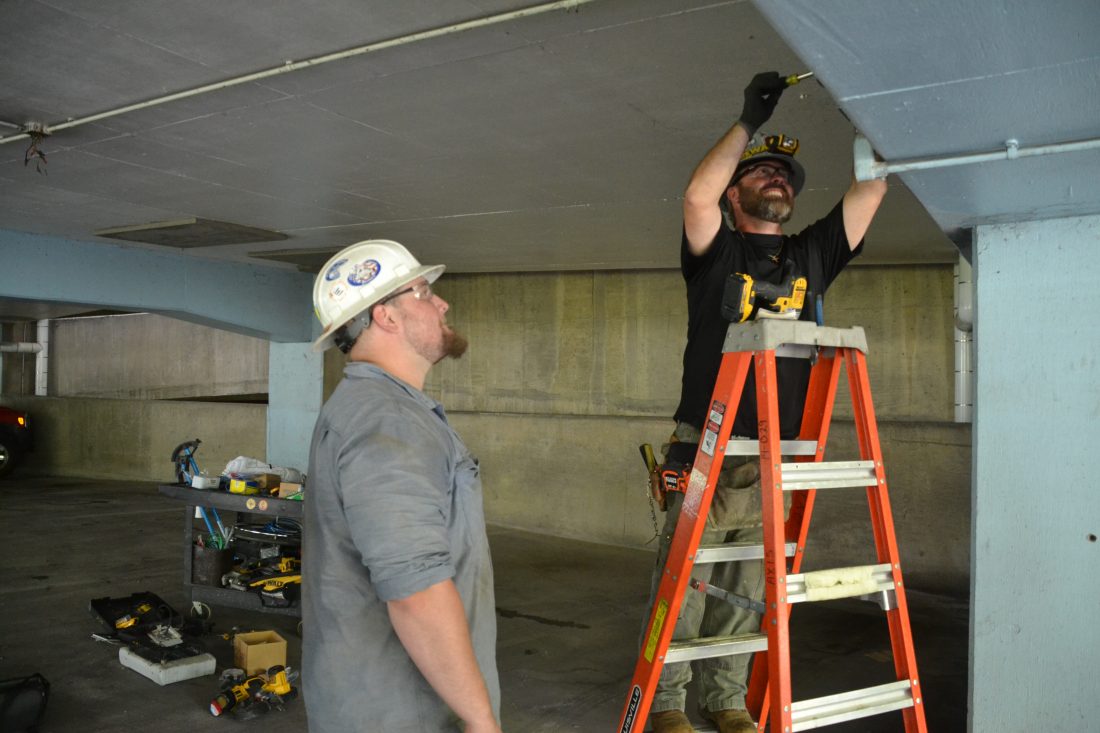 The trade that built the pathways on which power flows in the Mid-Ohio Valley is marking its 100th year of union organization this week.

The International Brotherhood of Electrical Workers Local 972 was initially organized on June 19, 1919. In the century since then, the electricians have wired up landmarks from Kraton Polymers, Eramet and Solvay to Marietta Memorial Hospital and Marietta College. When the lights come on at dusk in Marietta, their handiwork is visible everywhere.

“We’ve seen this area grow, we used to be predominately industrial, but we’ve seen industry change to a lot of commercial work,” he said. “We’ve done a lot of work with Memorial, Marietta College and Ohio University, we’ve built a lot of school buildings.”

Electricians from Local 972 will be wiring the new schools being built by Warren Local Schools, he said.

“We’ve always been able to adapt well, to provide whatever services are needed in this area,” he said.

Ferrell said the membership in the local has held steady over the years and is now at about 240. The union hall sends out electricians at the request of contractors, and he said at least 80 percent of the work in the area is done by union electrical workers.

“Our contractors are our partners in this industry, they employ our people and work hard to get jobs for us,” he said.

The local recruits eight to 12 apprentices a year, he said, which is about enough to replace members who are retiring.

“Our apprentices work during the day and go to school one to two nights a week for four hours, it’s earn-as-you-learn,” he said. “The goal is to turn out qualified and skilled labor, and we offer training, like journeyman upgrades, training in instrumentation, CPR, safety, a whole variety of things. If we have a job where we know specific skills are going to be needed, we make sure we have guys who can do that work, and put on additional classes if necessary.”

The industry is always advancing, he said.

“Fiber optics, solar, energy efficiency, motor controls, all sorts of stuff, you’ve always got to be trying to better yourself,” he said.

On Tuesday afternoon, Brian Nichols and third-year apprentice Levi Wears were working on a small repair job on the B level of the parking garage at Marietta Memorial Hospital.

“It was a trouble-shooting commercial call, a light shorted out, so we’re repiping it and running new wire,” Nichols said, standing on a step ladder and examining some scorched wires in a square box mounted on the ceiling.

Nichols said he became a first-year apprentice in 2004, and spent 10 years as an instructor.

“It’s a way to give back, help the new guys along, help them get through,” he said. “We’ve got a lot of resources for training, and it’s constant. You have to stay up to date.”

Wears, whose father was a welder who worked on water tanks, said the training he’s getting is equivalent to a college degree.

“We’re accredited through Northwest State, it’s a certificate and you can get upgrades left and right,” Nichols said.

The electricians, he said, also do significant volumes of volunteer work at local events such as the Ohio River Sternwheel Festival and fundraisers for the Humane Society of the Ohio Valley.

“We raise money for the food pantries and other causes,” he said.

Unlike many other trades, electricians don’t need to worry so much about fixing the work of do-it-yourselfers – most people have an innate fear of electricity.

“It’s just like a wild animal,” Nichols said. “Give it the respect it deserves, you won’t get bit by the snake.”

A century ago, Nichols said. the IBEW was established in Marietta to meet the needs of a booming oil and gas industry, and now it continues to serve the same need.

The local will host a river cruise Friday night for its members and their families, and hold a dinner and dance Saturday night for about 400 people in the Dyson Baudo Recreation Center on the Marietta College campus.