How it works: Oil and Gas Drilling — Standards built from years of industry regulation 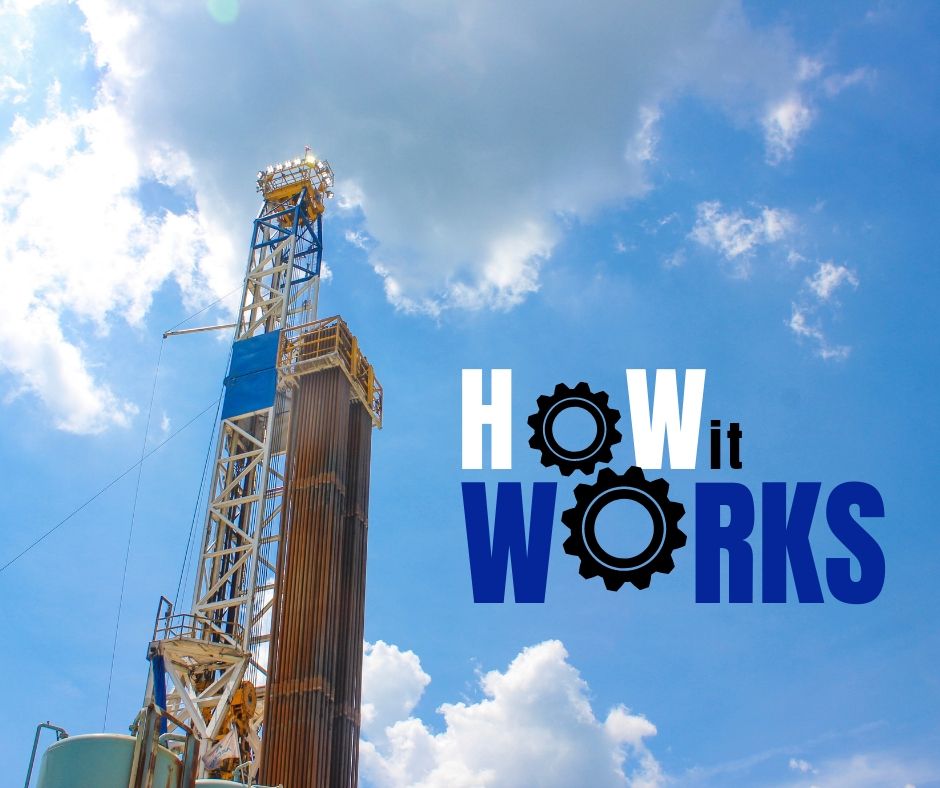 Photo and logo by Janelle Patterson. Drilling below local water tables in eastern and southeastern Ohio is regulated and monitored by the Ohio Department of Natural Resources and Environmental Protection Agency.

SAINT CLAIRSVILLE — Between rolling Appalachian hills filled with grazing cattle, the sight of a several-hundred-foot rig in the distance is no stranger.

But with the risk of drilling through prior underground industrial work, potentially inadequately documented, new drilling must be all the more cautious as the Marcellus and Utica Shale extraction continues to boom in the eastern and southeastern counties of Ohio.

That’s why James McGee, drilling superintendent at an Ascent pad in Richland Township lights up when asked what measures are now taken to safely get in the ground, thousands of feet below the surface, and extract natural gas while protecting local drinking water tables.

“Everything we do is documented, we GPS-track every movement of our drill through the earth, and every layer we drill is cemented until well below the water table,” said McGee. “Everything we’re putting in the ground (when drilling) comes from Mother Nature, the bentonite and barite — are just finely ground rocks, the diesel comes from the ground, the water we use is cleaner than drinking water.”

Oil and gas drilling began in Ohio in the early 1800s, hydraulic fracturing (also known as fracking) was then first used in the mid-1800s to source water and by the 1950s began being used to extract natural gas.

Over that time safety regulations and location, measurements have tightened, mineral rights contracts have lengthened, and the expensive operations to drill and capture have become documented by the minute.

At the front gate of the drilling site Thursday, a notice read “Danger: Hydrogen Sulfide (Poison Gas) may be present. Do not enter if yellow or red flag/light is displayed,” and continues on a second board noting hazards including slips, trips, falls, elevated work, rig traffic, and possible H2S gas.

But McGee quickly pointed to the lines in place to burn off excess gases that leak to the surface during drilling and cautioned; if three horn blasts or one long blast is sounded, run.

“When we’re drilling where there used to be mines, we have to be especially careful–that’s why we try to drill through mine shafts, so we can stabilize them as we go down with our layers of steel and concrete,” explained McGee. “But everything is monitored from the color of the mud coming back up as we drill to the pressure changes at various levels and we have constant testing going on by our mud engineer.”

These safety precautions have developed on job sites across the nation as the oil and gas industry has expanded from oil extraction accidents leading to spills in bodies of water (Gulf of Mexico), orphaned and old wells igniting and causing physical injury (Noble County this past winter), and other industrial links to long-term health risks causing researchers to collect more data (U.S. Environmental Protection Agency 2016, Hydraulic Fracturing for Oil and Gas: Impacts from the Hydraulic Fracturing Water Cycle on Drinking Water Resources in the United States.)

Now, a pad visit for any outsider or contractor working at a drill site starts with a safety orientation.

That orientation ends with questions to ensure retention of core points like precautions around equipment, knowing where the muster areas in an emergency are and where safety data sheets are kept for chemicals utilized at the job site.

Then on the pad, layers of safety start in the ground with water retention and build up to the top of the drill where lighting illuminates the site in its entirety through each night.

But what’s happening below the surface?

Water tables from where drinking water is extracted typically rest between 200 and 500 feet below the surface (think the Ohio Statehouse height to the height of the Huntington Center in Columbus).

Drilling for natural gas in eastern Ohio reaches between 5,000 and 9,000 feet into the ground (five to 10 Key Towers stacked on top of each other).

And at those depths, drilling through layers of rock requires precision, lubrication and constant monitoring.

“But it’s basically just a huge hand drill,” explained McGee. “And we keep attaching longer extensions onto it the farther down we go until we hit the (ODNR) permitted depth in the shale and turn 90 degrees out north or south.”

The process begins wide, he explained, then like a gigantic upside-down cake, each layer deeper gets tighter and smaller as the operation goes into the targeted rock formation.

“As we go we need that hole stabilized, so it doesn’t cave in and so what we bring up doesn’t slip out into the drinking water,” McGee continued, walking past the cementing going on to stabilize the layer his crews had reached by midday.

Each of those pipes serves a different purpose as layers which are poured to not only protect surrounding water tables from contamination but also support the production operations despite higher pounds of pressure the deeper into the ground they go.

According to the U.S. Environmental Protection Agency conductor casing is steel pipe which prevents the in-fill of dirt and rock in the uppermost few feet of the drilled hole, this is the broadest diameter pipe.

The narrowest casing is then snaked through these layers to the deepest penetration depths. It’s called production casing, and it transports fluids and later natural gas up and down the well to the surface.

McGee explained the materials brought up from beneath the surface as the drilling goes deeper are then ground up and disposed of with lime through third-party landfills.

“They like the rock we bring up because it helps hold down the plastics and the layers they have, to help increase the pressure and crush down that waste,” he added.

“Then once we’re done drilling down and out, each one side-by-side we move off the pad to the next section of work where they start fracking,” explained McGee.

Hydraulic fracturing, or fracking, is the process of utilizing that directional drill to then inject at high pressures salt water and a mixture of chemicals to break small fissures into the deep rock formation and release natural gas built up over thousands of years.

“That gas then follows the path of least resistance up through the shaft we’ve created for them,” McGee continued.

The brine water also comes back up and is either reused, contained on site or treated and disposed of in old oil and gas wells, like the Heinrich wells outside of Marietta off of Ohio 676 completed in 2016 and pumping brine water from the loading site on Ohio 7 up to the Ohio 676 wells.