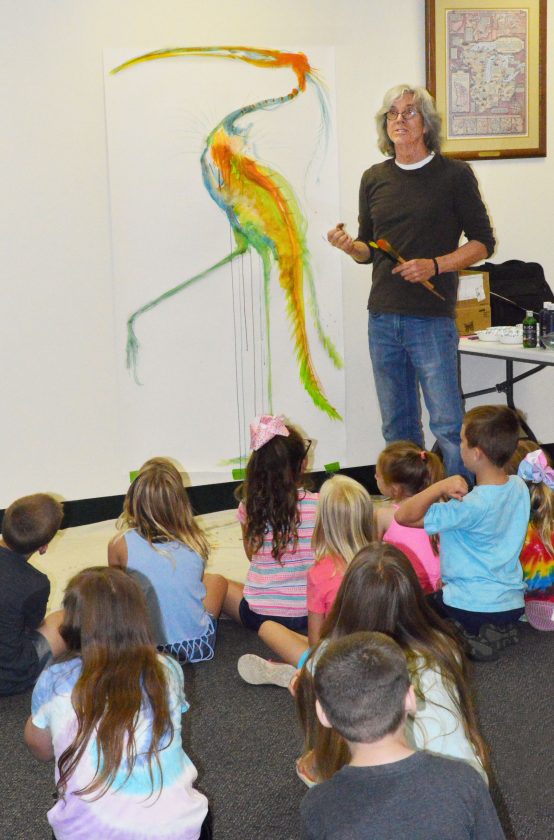 David Catrow amazes the children with a colorful painting of a bird at Saturdays event at Campus Martius.

Communication using imagery has the power to make people think.

Those are some thoughts that writer and illustrator David Catrow stressed to children Saturday as part of Washington County Public Library’s Summer Reading Program.

The event was held Saturday morning at Campus Martius Museum with close to 30 children in attendance and again at the Belpre Public Library in the afternoon.

Catrow is a New York Times best selling children’s writer, illustrator and cartoonist from Springfield, Ohio. He has illustrated over 60 children’s books published by the likes of Simon & Schuster, Random House, Disney and National Geographic among a slew of others.

“Creating art is something that I’ve always done,” said Catrow. “I think I was born an artist but I’m not unique in that respect. I think all humans are all born artists. We are visual thinkers, it’s a human ability. We are visually oriented creatures.

“We all use our hands when we talk and our hands are hard wired to our brains,” explained Catrow. “The difference is I have something in my hand and I’m recording the movements that are mirroring the shapes, ideas and concepts that are inside of my head.”

Catrow was interested in science as a child. He wandered the woods, waded through wetlands and discovered frogs, birds and toads. He was interested in the natural world. He wanted to understand why his world was like it was. When he went to college, he majored in biology.

One of the keys to art is observation. Back in the 15th century, that’s how people learned, many times with a mentor or teacher. They would explore the world and learn by doing. Leonardo da Vinci observed the behavior of water going around rocks and over waterfalls, light and shadows and also studied the human anatomy. Observation, but not knowing it at the time, is how Catrow learned as well.

On Saturday, while showing how he creates illustrations, Catrow stressed to the children that everyone has a voice in this world and that voice of communication could be through art. More people need to become producers rather than consumers of creativity.

“Children have no concept of how books are created,” said Julie Stacy, Washington County Public Library Youth Services Manager. “I want children to realize that authors and illustrators are real people and some of them even come from Ohio, like David Catrow. This can give them an idea of what does into books, including the art.”

Stacy said even though it was a children’s program, it was nice to see so many adults attending as well because they like stressing books, family and reading.

“He had a beautiful way of presenting himself, his work and his thoughts on the world,” said Andrea Richardson of Marietta, who brought her daughter Emily, 10, to the event. “He showed the kids a way to have a voice to make a change, whether it’s small or big.”

Zackary Lantz, 7, and his sister Kristin, 5, of Williamstown, said their favorite part of the program was when Catrow slammed his big paint brush onto a large sheet of paper on the wall and colorful paint splattered and dripped. Catrow then worked with the paint with brushes and created a beautiful bird painting.

Their mother, Kristi Lantz, is the principal at Phillilps Elementary.

“I thought that his program was wonderful,” said Lantz. “As principal, I read a lot to kids. I did one of his books recently to sort of promote this event. I think it’s wonderful for kids to be involved with a world greater than themselves.”

Lantz said she thinks that the Washington County Public Library does a great job with programs for kids.

“Anything that can do to get kids excited about reading is great.”

For more information about the Washington County Public Library and its children’s programs, visit www.wcplib.info.