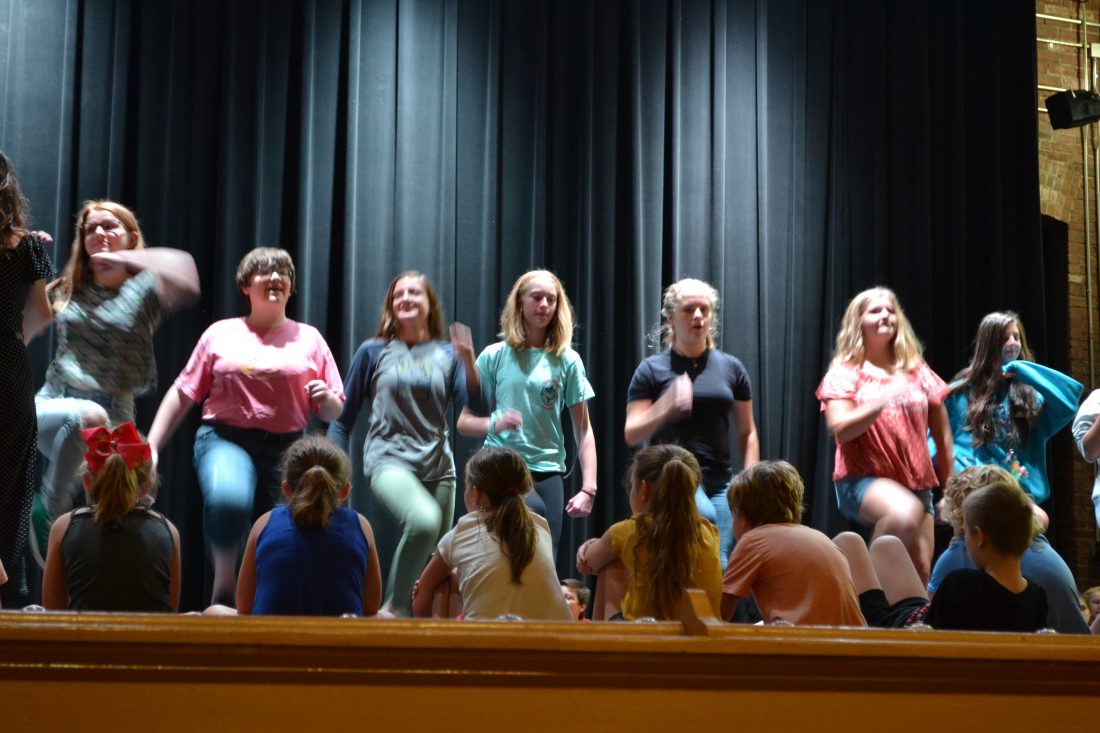 Photo by Michele Newbanks While the younger auditioners watch, the older students learn movement during the audition for the production of "Aladdin" at Peoples Bank Theatre in Marietta.

More than 80 local children gathered Monday morning at the Peoples Bank Theatre in Marietta in hopes of getting a part in Saturday’s production of “Aladdin.”

Students entering first through 12th grades were gathered into groups so the directors could hear them sing and see them move during the two hour audition process. Once the auditions were finished, 64 students were cast in the Missoula Children’s Theatre production. The traveling theater company provides training around the country for youth.

Parkersburg resident Johnny McClung’s son Caleb was one of the enthusiastic auditioners.

“He loves theater. He’s been in Camp Vaudeville and plays at the Actors’ Guild,” McClung said of the 11-year-old. “He’s always been a big ham.”

This is the first summer for Holden Grace and Amy Montecalvo, who are the directors for the production.

“It seems like a very daunting task, but the way that Missoula Children’s Theatre does it, it is very streamlined,” Grace said. “As long as you stick to a schedule and get everybody to know their stuff, which in the summer is a little bit easier since they have time to go over their lines, it usually gets done. It’s not too difficult.”

Other than the main cast, children were chosen for a variety of parts, including narrators, genies, dancing camels, lost penguins, vagabonds and wise-cracking, joke-telling palm trees, he said.

“Here, we’ve had the most kids we’ve ever had at audition, but there was a week in Kentucky where we only had about 25 audition and we still put on a production,” Grace added.

“There’s a large cast of characters,” he said. “And then there are four assistant directors that are helping out backstage.”

“Being in the show, you have to memorize lines and act and all of that,” she explained. “Being one of the assistant directors, you get to help out, you have the script with you at all times and you can help the kids with their lines if they forget it. I find it very fun. It’s not like I don’t find acting fun, but I think assistant directing is one of the best ways you can communicate with a lot of kids.”

Jackson Whited, 11, of North Hills, plays “The Mysterious One” and said he signed up for the play because he loves to act. He said his whole family, even before he was born, was into acting.

“The one who got me into it was my dad,” he said. “He taught me lots of music and he would be in lots of plays and I’d go to them and watch them. He really just inspired me to do what he did because I always wanted to do exactly what he did.”

He said this is his 12th show and he tries to do every show he can think of. He was at Camp Vaudeville at the Smoot Theatre last week and he’s set for Mary Poppins at the Actors’ Guild in Parkersburg next week.

“I’ve had shows three weeks in a row,” he said with a sigh.

• Where: Peoples Bank Theatre on Putnam Street in Marietta.