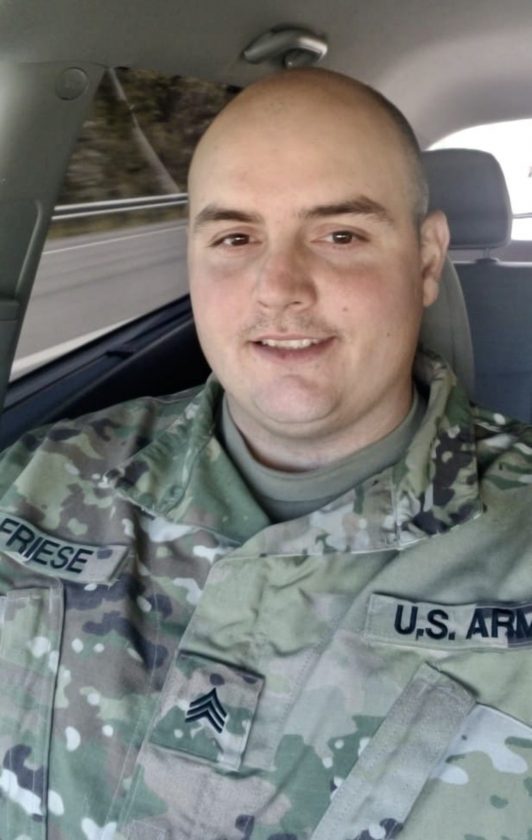 PARKERSBURG A soldier from Wood County was killed in a non-combat related incident in Kuwait, officials said on Saturday.

He is survived by his wife, children, mother, sister and grandparents.

Eight servicemembers have been killed this year in the mission against ISIS, Stars and Stripes reported.

Friese was assigned to the 821st Engineer Company, 1092nd Engineer Battalion, 111th Engineer Brigade, in Summersville. He was a light-wheeled vehicle mechanic with the 821st.

He joined the National Guard in 2008 and served in the 821st Engineer Company or above at the 1092nd Engineer Battalion for his entire 12-year career, according to the Guard.

Statements have been issued by the governor, the adjutant general of the Guard and both West Virginia senators.

“Cathy and I are praying for William’s family and the entire National Guard family, and we ask all West Virginians to join with us,” Gov. Jim Justice said. “Everything we have we owe to the men and women who defend our country and protect our freedoms. We will do everything we can to provide support to his family and will never forget his service and sacrifice to this great state and our great nation.”

“Our missions are inherently dangerous and not without risk, yet every day, our military members are prepared to defend our Nation in the most dangerous places in the world,” he said. “William represents the values and service to State and Nation that are the foundations of service in the National Guard. May we never forget Sgt. William Friese, his family or the legacy he leaves behind.”

West Virginia has a long history of service and sacrifice for the nation, Sen. Shelley Moore Capito said. Friese was the “perfect example of that brave and selfless service,” she said.

“We send our thoughts, prayers and support to his family, friends and fellow Guardsmen and women during this difficult time,” Sen. Joe Manchin said.