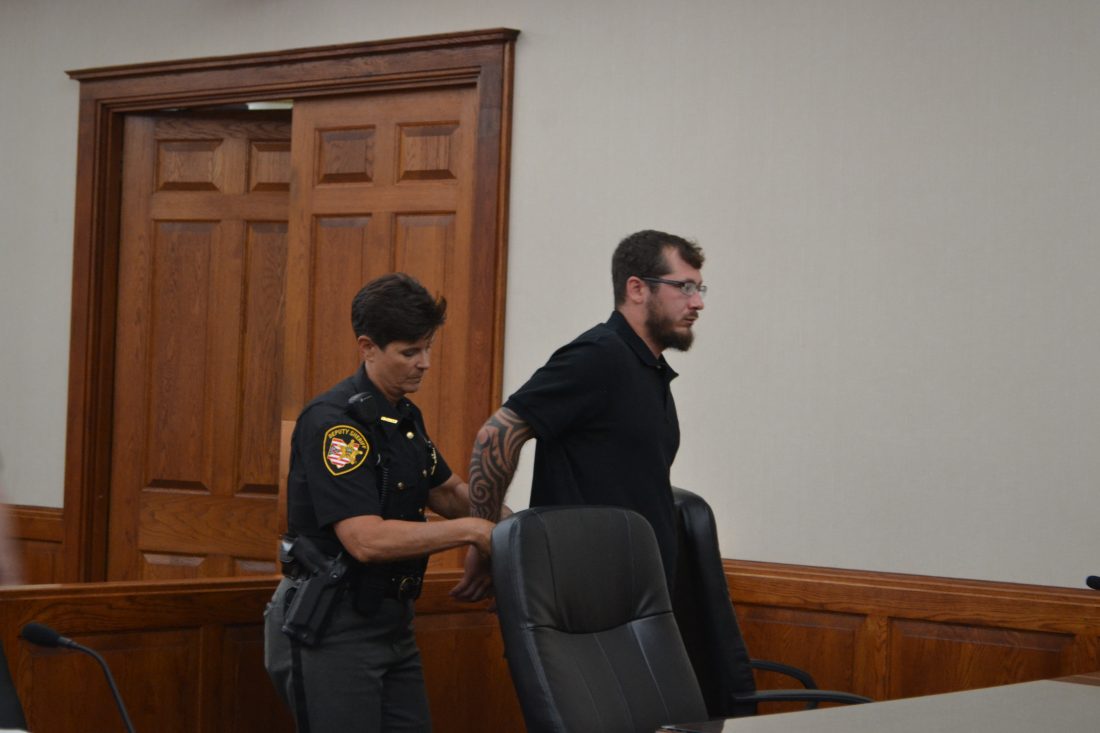 Photo by Michele Newbanks Corey Lang was handcuffed Friday by Deputy Mary Pfeifer before being taken to the Washington County Jail to serve out his 90-day jail sentence.

The sentencing of Corey Lang Friday morning was met with stunned silence as Washington County Common Pleas Judge Randall Burnworth gave him 90 days at the Washington County Jail for the death of 23-year-old Tyron Reed.

On March 26, 2018, Waterford resident Lang, 25, was indicted by a Washington County grand jury on charges of aggravated vehicular homicide, failure to stop after an accident and tampering with evidence.

Reed died while riding in his two-seat all-terrain vehicle late on the night of June 3, 2017. Investigators concluded that Lang was driving the vehicle, lost control of it on a back road, and left the scene after the vehicle went off the road, struck a culvert and flipped over. His no-contest plea was the first indication that Lang had abandoned his previous account that Reed had been driving that night.

His plea of no contest was to a reduced charge of vehicular homicide, a first-degree misdemeanor, along with failure to stop and tampering with evidence, both third-degree felonies. A no-contest plea indicates the defendant does not admit to guilt but acknowledges that the evidence is likely to result in a conviction and for that reason foregoes the right to trial. His maximum sentence could have been 72 months in prison.

Before the sentencing, Reed’s mother, Tammy, spoke to the court.

“I just feel that he should have to be in prison. Our son has been gone for two years. We’ve missed out on a lot of things and (Lang’s) been able to do whatever,” she said through tears. “I don’t even get to see my son get married or have kids because of this.”

She said as a result of the incident, nothing had been done to Lang, even though he’s a threat.

“There’s no remorse or else he never would have let it go this long,” she said. “You left the scene. You don’t ever leave a scene if somebody is laying there dead. And then my nephew had to pull the buggy off of him and they turned around and dropped the buggy and he was gone. (Lang) doesn’t care. He stepped on him when he got out of the buggy. He was in the buggy. I just don’t know what else to say. I just miss my son.”

“I understand the court’s hesitation in (giving him time in prison), but at the same time, with someone with his record, as the court has reviewed, he’s had now OVIs at this point,” Silwani said. “He’s shown an unwillingness to stop committing crimes. He has continued prior to this event and after this event to continue to use substances to get into a car and to drive, knowing that his license was suspended and still continues to drive.

Silwani said Lang has had at least two or three driving under suspension charges and at the time of the crime, his license was suspended for an OVI.

Lang’s attorney, Rolf Baumgartel, asked the court for probation for his client and argued that as far as he knew, Lang had not been arrested since the incident in June 2017. Lang did not speak on his own behalf.

“This is one of the most difficult cases I’ve sentenced on in the last seven years,” Burnworth said. “There’s an awful lot inside of me that agrees with Ms. Reed and the family that you should go to prison. But the guidelines for sentencing don’t really scream ‘send to prison.’ You can’t bring the victim back. You have shown, based upon your criminal record, which is primarily driving offenses, that you, at this point, have been running and gunning with disregard for your own safety and that of others and that has resulted in a death. It could just as well have been you that died that night.”

After his 90-day jail term, he will be sent to the STAR Community Justice Center in Franklin Furnace for four to five months. He will have five years of probation and his drivers license will be suspended for two years.

After the sentencing, Reed just shook her head in disbelief.

“It’s not fair. He should have been put in prison,” she said.

She said she doesn’t believe he’ll learn anything from his time in jail.

“He’s been a child that’s been messed up all his life. Not a child, but a person. It’s messed up. He doesn’t care,” she said. “He doesn’t even want to apologize while we were sitting there. He didn’t say a word. He’ll mess up again. He’ll kill somebody else when he gets out.”

• Corey Lang pleaded no contest to vehicular homicide in the 2017 death of Tyron Reed.

• He received a 90-day jail sentence and five years probation.

• After his jail term is up, he will spend four or five months at the STAR Community Justice Center.