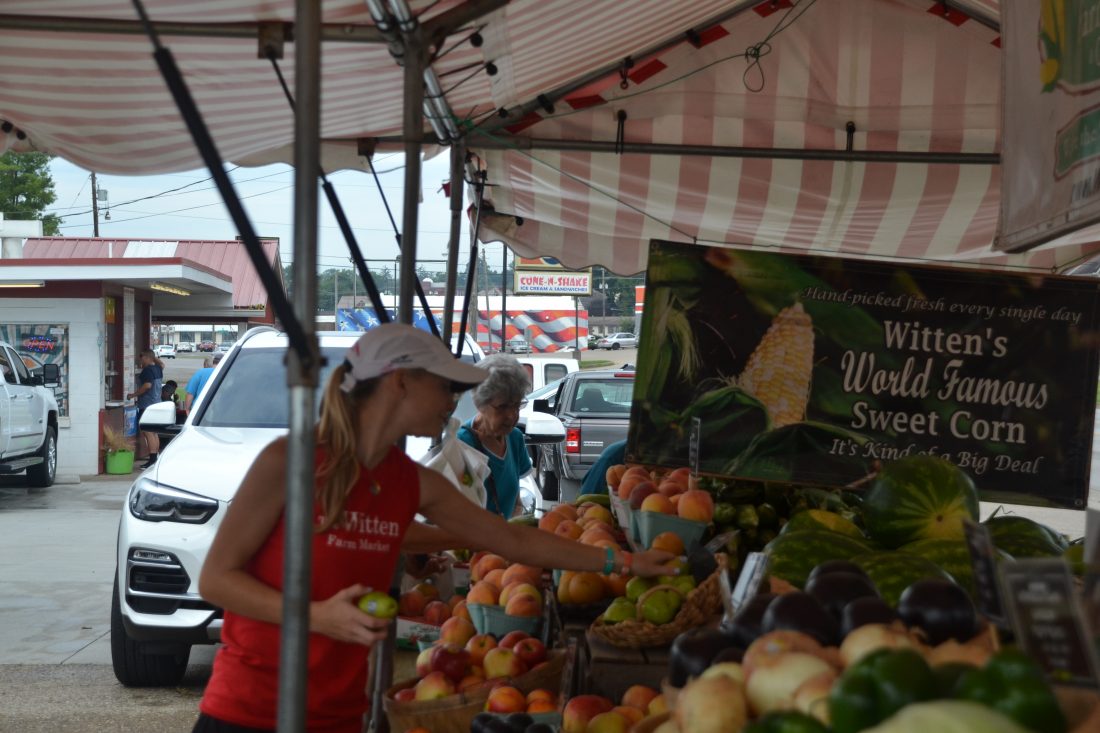 Photo by Michael Kelly Chrissy Billingsley of Witten Family Farm rearranges apples at the farm's produce stand on Pike Street in Marietta Thursday. The operation will continue until Nov. 1.

With school back in session and residents enjoying the final weeks of summer, many Marietta-area enterprises will be adjusting their schedules and offerings.

It’s a last chance for some fresh corn and produce, as well as some of the area’s favorite recreational activities.

The public swimming pools in the county are closed. On Wednesday night, the Beverly community pool across the parking lot from Beverly-Center Elementary School sat drained and vacant, and on the entry door to the Marietta Aquatic Center, a sign read, “Thank you all for a great season, see you next summer.”

Ice cream vendors are looking ahead to the disappearance of summer heat as well. Kreamy Kreations on Greene Street by the levee will close up after the Ohio River Sternwheel Festival the second weekend in September. Cone’n’Shake on Pike Street, which serves hot food as well as ice cream and milk shakes, will remain open through December but closes up during January and February.

Next door on Pike Street, the Witten Family Farm seasonal fresh produce stand will continue operations through Nov. 1, Chrissy Billingsley said Wednesday while serving a customer buying peaches. The product, however, will change.

“Right now, the sweet corn is the biggest thing, that and the tomatoes,” she said. “They’re going fast.”

Billingsley said she starts work at 7 a.m. when the truck arrives from the farm near Lowell, loaded with produce picked the night before. What’s available at the market depends on the ripening crops.

“We’ve got gala and honeycrisp apples now, and green pears. We had sweet Georgia peaches, but they all sold out yesterday,” she said.

It’s been a good year for produce, she said.

“Especially the cantaloupes, they’re the biggest I’ve ever seen,” she said. “Somebody asked me yesterday if they were actually cantaloupes.”

“The pumpkins will come in,” she said. “I’m really excited about the pumpkins.”

Wagner Farms in Lowell still has red and black raspberries for customers to pick, but Randy Wagner said they expect to close the roadside stand in mid-September.

“We still have corn and tomatoes, peppers, some watermelons, and zucchini,” he said. “Things slow down quite a bit after school starts.”

Stacey Family Farm in Reno has closed for the season, according to a voice message at its phone number.

The Valley Gem sternwheeler sees a slowdown after vacation season but still offers charters in the fall and winter, and intermittently some daily sailings.

“The schedule is sporadic, we go to weekends for sailings starting in September, but in October and November we’ll have fall festival cruises, and in December we’ll have Santa cruises,” Carlee Smith, a staff member, said Thursday. “And of course the restaurant is open all year.”

The Marietta Adventure Company will curtail its shuttle service that delivers rented kayaks to the river on Labor Day, but will continue renting kayaks and bikes. After September, the shop will shorten its hours and close on Sundays, staff member Elyse Gorby said.

Michael Kelly can be contacted at mkelly@mariettatimes.com

• Tourism and recreation businesses will be scaling back ahead of fall.