MCS levy: A look at the district’s aging buildings 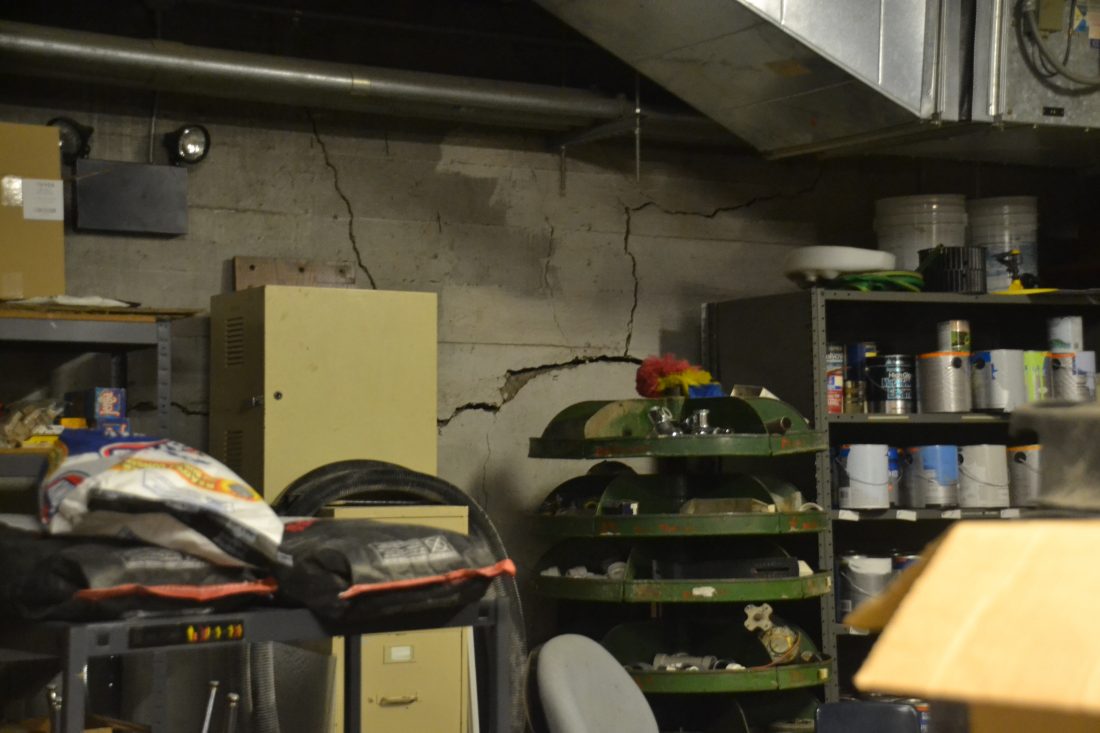 Photo by Michael Kelly A staggered crack is visible in the foundation concrete of Marietta Middle School's foundation. The school district is proposing a program for building new schools on the Nov. 5 election ballot.

Photo by Michael Kelly Darrell Prim, operations manager for Marietta City Schools, looks at a window in the weight room on the third floor of Marietta Middle School Thursday. The windows, installed more than 20 years ago in the century-old building, are slowly being replaced by district maintenance staff.

Photo by Michael Kelly A staggered crack is visible in the foundation concrete of Marietta Middle School’s foundation. The school district is proposing a program for building new schools on the Nov. 5 election ballot.

ditor’s Note: This is the first in a series of stories about the Marietta City Schools levy to be decided by voters in the Nov. 5 election

Darrell Prim walks through the boiler room in the basement of Washington Elementary School and draws back a piece of carpet tacked up over a dusty niche. At the back of the space, he opens an old door, behind which is complete darkness.

A flashlight beam from his cellphone does little to illuminate the space, which extends nearly beyond the light’s throw. The concrete lined, dirt-floored room is the place that at one time received coal deliveries.

Washington was built in 1912 and was heated with coal-fired boilers that sent steam through pipes to heat the three-story building. Custodians shoveled the coal out of the room and into fireboxes to keep the heat going,

The coal-burning boilers were replaced at some point, and the boilers in use now burn natural gas, but the piping in parts of the school is likely still original, said Prim, the operations manager for Marietta City Schools. 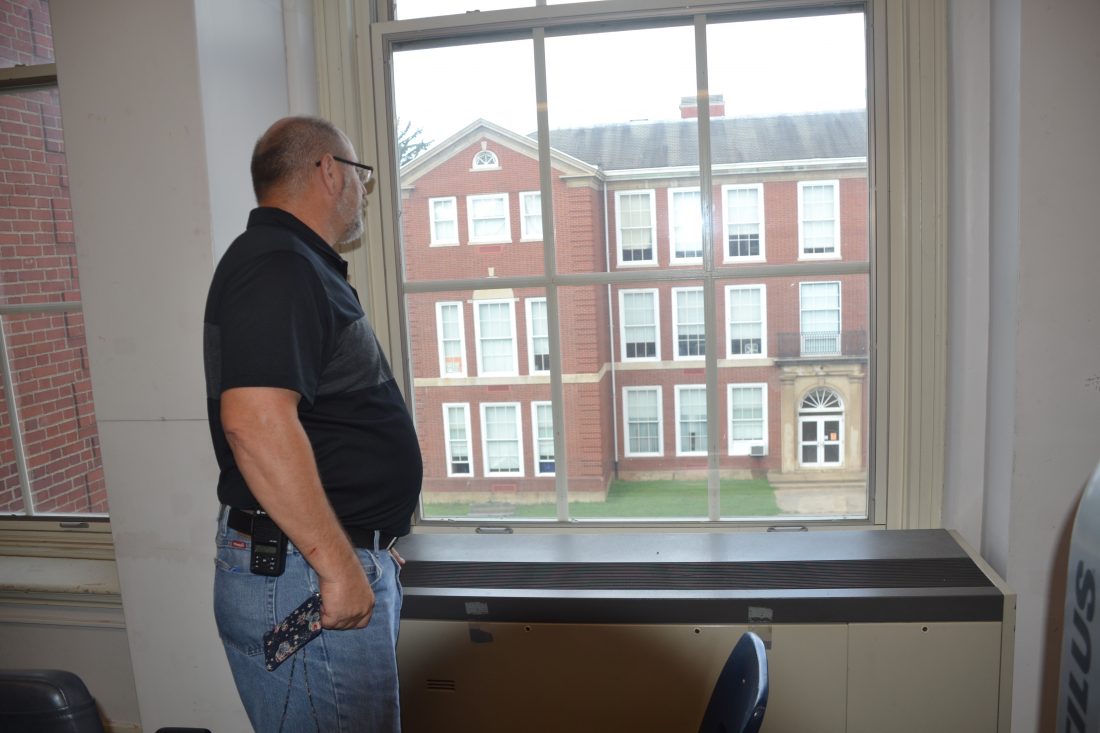 Photo by Michael Kelly Darrell Prim, operations manager for Marietta City Schools, looks at a window in the weight room on the third floor of Marietta Middle School Thursday. The windows, installed more than 20 years ago in the century-old building, are slowly being replaced by district maintenance staff.

“The piping, that’s the hard part. In some places, it’s impossible to get to,” he said.

The coal room was capped with concrete, and above it now is a section of driveway and parking at the back of the school. The far wall forms part of the retaining wall for the playground.

Voters in Marietta will be given an opportunity Nov. 5 to make a major decision about the future of public education in the city. That decision will either commit $55 million to finance new buildings for Marietta City Schools or remain with the status quo, a stock of six schools ranging in age between 55 and 107 years old.

The school system in the city is not merely old, it was built during a time when far more children attended it. The schools were built over a period of five decades for a growing city and meant to provide space for more than 4,000 children to receive education.

The enrollment this year for Marietta City Schools is about 2,600.

The project to replace the six schools, scattered in various locations around Marietta, with a single campus building, divided into elementary, middle and high school areas, comes with a price tag: a 37-year bond financing issue that would tack 5.6 mills onto property taxes, projected to cost the owner of a $100,000 market value home about $187 more a year in taxes for the 37-year payoff period.

What is the cost of the status quo? That is a complicated question.

The aging buildings in the system will require increasing investments in maintenance and repairs as the years go by. The system has inherent operating inefficiencies: declining numbers of students make it challenging to distribute teaching resources in the elementary grades – four of the six buildings are elementary schools – and transportation is logistically difficult. Only this year, the district has equipped most lower grade classrooms with air conditioning, which required 88 room-size cooling units at a cost of $442 each over a period of three years, and additional investments in electric supply. None of the buildings are structured to accommodate central air conditioning, and using room units was the cheapest option for cooling but a significant addition to the monthly utility bills.

In a south-facing room on the third floor of Washington, Stephanie Davison teaches a fifth grade class and on Thursday was doing some planning in the temporarily empty classroom while enjoying the temperature-controlled atmosphere offered by a newly-installed window-mounted air conditioner.

“It used to push 80 or 90 degrees in here during August and September,” she said.

During the winter, the school thermostats are reset to 60 degrees to conserve energy, Prim said, but it takes a while for the buildings to come back to a comfortable 74 degrees.

The heating system boilers in Washington were replaced in 2014, Prim said, at a cost of about $350,000. That didn’t include many of the heat distribution system elements.

“To do a proper job, it would have cost about $1.5 million. This is the newest system in the district,” he said.

The boilers and pumps send heated water throughout the building, and fan systems blow air across the heated pipes into the building’s rooms.

The boiler systems, he said, have a life of 15-20 years, which means within 10 years they’ll be due to be replaced again.

“We’ve already changed the fireboxes and blowers,” he said. Elsewhere in the building, the gymnasium roof is leaking and the electrical system is at capacity.

Marietta Middle School, the second oldest building in the district, dates back almost a century, with a variety of add-ons and renovations through the decades, giving it an improvised and ramshackle look and feel. Stairways and sloped halls run confusingly around the structure, leading to and away from classrooms, two gymnasiums, a cafeteria and various other destinations.

The mini-gym off the lower level was originally the boiler room, Prim said, and the coal hole was at some point converted to a maintenance room.

On the second floor, he points to a trough sink installed a while ago to replace several basin sinks, which were perpetually suffering from clogs and overflows.

“We found one clear drain and used it, capped off the rest of them,” he said. One of the two main sewage lines leading away from the school goes down the steep, wooded slope on the west side of the property to join a main on Seventh Street. The old cast iron pipe has been penetrated by roots and will have to be replaced at some point, he said, a job that could cost around $200,000.

“We’ve got four maintenance guys, and they’re always chasing plugged drains, it keeps them hopping all the time,” he said.

Prim lifts the cover on an electric panel on the third floor. With 42 circuit slots, it’s one of the biggest made. All but two slots are taken.

The middle school boilers, he said, were replaced in 2011 and will be due for retirement in 10 years or so. The big double-hung windows date back to 1995, and his crews are replacing them one or two at a time as money allows.The windows stick, and the sashes are rotted.

The more recently built schools are Putnam, Harmar and Phillips, all opened in the 1950s, and Marietta High School, the most recent building, which dates back to 1964. All have their share of problems, including leaky roofs, decades-old plumbing and electrical systems, and until the recent installation of room air conditioners, climate control.

Such repairs are generally financed by the district Permanent Improvement Fund, a tax levy that brings in $1.25 million a year. That fund, treasurer Frank Antill said, is also used for curriculum purchases, school buses and other major equipment needs.

Budgeting, Prim said, is one of the biggest challenges presented by the stock of old schools.

“My main problem is not knowing what’s going to go wrong,” he said. “With these buildings, it’s just a shell game.”