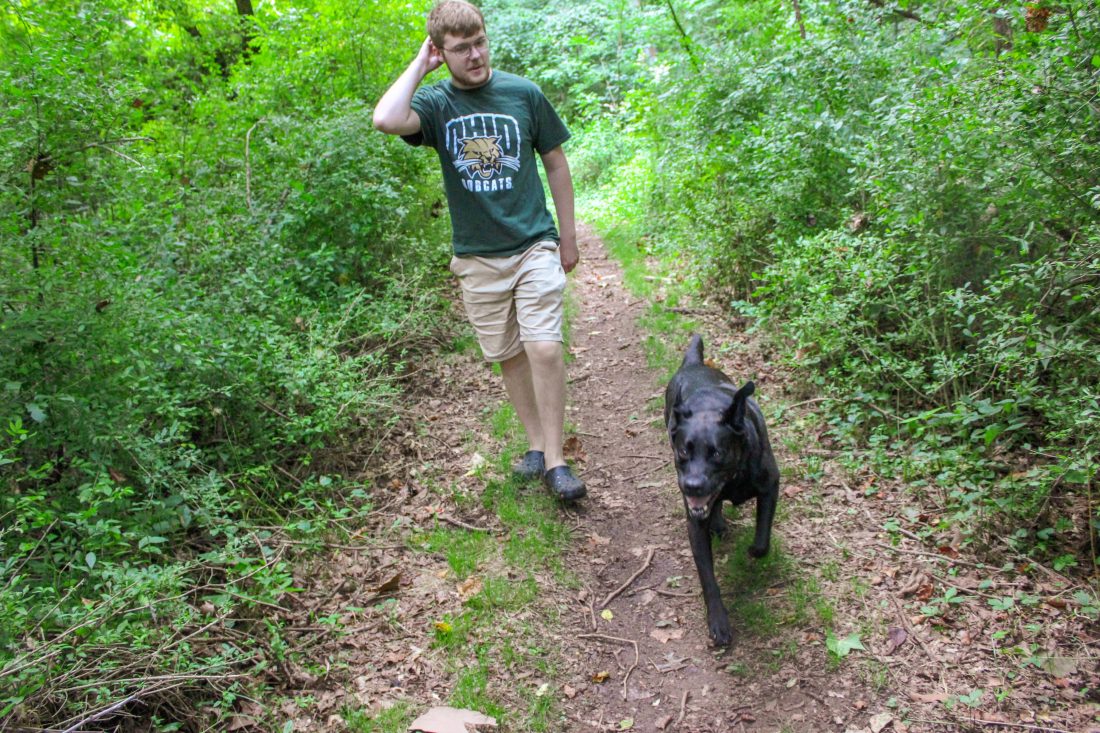 Photo by Janelle Patterson Will Mullen, 19, walks along Moon Trail in Marietta as his adopted shelter dog Molly zooms by Thursday.

For the last six years, Molly has made Emerald Street in Marietta her domain.

She takes off like a bullet up and down the green hills.

She runs on adventures into the woods surrounding Moon Trail and Old Walnut Trail.

And she ensures that her companion, Will Mullen, 19, is safe and happy.

“We got her from the humane society right after I turned 13,” he explained. “She’s always there for me, and it’s great because you don’t have to talk. She just loves me.”

Molly in recent years has even appeared on posters downtown, including ones for this weekend’s fifth annual Howlin’ in the Alley–with three tennis balls all strategically held in her mouth.

“She doesn’t really do a lot of tricks, but she’s a showman and loves attention so she’ll get those in her mouth and walk around to show everyone in the room how proud she is,” Will explained.

The “Howlin” fundraiser not only honors Molly’s life in the Mullen home, but sends proceeds to the shelter from which she was adopted, and its ongoing needs.

“Molly was a two-time loser at HSOV, picked up as a puppy and rescued, but after six months she got bigger and bolder than the small dogs where she was before, so she was taken back to the shelter,” explained Michael “Moon” Mullen, Will’s father. “Much to our good fortune, she’s part of the family and certainly a blessing to Will.”

Claire Mullen, mother, wife, and head of operations for Over the Moon Pub & Pizza, said the fundraiser has grown every year, with not only Moon performing with his band The Shiners, but also drawing other local and regional groups like The Settlement, OYO, Cutler Station and Josh Lee.

“This will be the third year The Settlement is at the Howl, and they’re great to dance to,” she said. “There are no tickets for the concerts, we just ask that you bring a bag of Purina dog or cat chow.”

Moon said that even without a specific certification, Molly has served the family therapeutically just by her nature, dialing back everyday stresses.

“There’s nothing purer than dog love,” he said. “Once we got Molly we realized what a great service the society provides and how they work so hard with such a small level of funding to stretch it and take care of dogs and cats that can’t take care of themselves.”

And for those who attend the fundraiser, it’s a way to join the Mullens in a round of thanks.

“This is a good opportunity for us to say thank you, for bringing this great crazy dog into our lives,” said Moon.

• What: Howlin’ in the Alley, Humane Society of the Ohio Valley Fundraiser.

• Where: behind Over the Moon Pub & Pizza, in the alley between Front and Second streets, Greene and Butler streets.

• Performing: The Settlement, OYO, Cutler Station, The Josh Lee Band and Moon and The Shiners.

• Admission: A donation of Purina dog or cat food.

Source: Over the Moon Pizza.