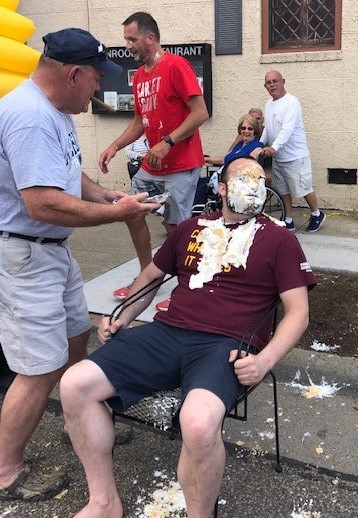 In July, the Marietta Noon Rotary started a project to raise $5,000 for international disaster relief by the end of September.

By mid-September, the club had already raised almost $12,000.

The money will go to an organization called ShelterBox, which provides goods for people around the world who have been impacted by natural disasters.

Each box, which cost $1,000 each, contains tents for a family of four, a potbelly stove, solar lights, water containers and a purification system, tools, cooking utensils, blankets and mosquito nets.

“It has the things that you would need, because whether it’s a hurricane, typhoon, or earthquake, or fire, or flood, whatever it is, those people are displaced from their homes,” Miller explained.

ShelterBox is based in Wales, U.K., and has a network of people in every country that report any natural disaster that happens.

“They know within 60 seconds in Wales if a natural disaster has occurred or is in the process of occurring in an area,” Miller added. “And they start getting boots on the ground, which are all volunteers.”

“When ShelterBox partnered with Rotary International, the whole thing exploded in the numbers of families that can be helped after natural disasters and other things that leave them homeless. Because Rotary has 1.3 million members around the globe and the problem with a lot of these international projects is that you don’t have anyone on the ground in Sudan or in Nepal or in Grand Bahaman Islands that know the language, know the culture, has all the local connections…Rotary has provided that,” said Miner. “But the local connections have been critical in their success in making this work.”

According to ShelterBox, they have been able to respond 18 times to natural disasters and sent shelters and aid to 17 different countries. Some 86 percent of every donation goes to providing shelter for families, while only 15 percent is spent on administrative costs.

Minor said raising money through the local Rotary club for ShelterBox was a way for Marietta to connect to other countries to help others in need.

To help raise the money, Bruni came up with a contest for Rotary members.

“It started as something we’ve done to raise money for hunger awareness at one of our (Peoples Bank) branches before,” Bruni said. “We would pie the teller who raised the most money and that was really the only fundraiser I’ve ever done. We picked a few Rotarians who had a lot of influence and knew a lot of people and we said if you raise $500 or more, you get a pie in the face.”

She said to keep the participants motivated, whoever raised the most did not get hit with a pie at the sternwheel festival.

“The idea was if you want to see them get hit with a pie in the face, you’d donate money,” Miner said.

Colleen Cook of ThiesenBrock in Marietta raised the most money, bringing in $3,500 for the project.

“She did an awesome job of leveraging her connections,” Bruni added.

Washington County Assistant Prosecutor Joseph Derkin was one of the participants who got hit with a pie.

Although the participants could choose the person to throw a pie at them, he wanted to make it a contest within the Washington County Courthouse. Courthouse employees could donate and get the opportunity to hit him with a whipped cream pie.

“The defense attorneys raised a lot of money,” he said with a laugh, noting he raised a total of $500.

Ultimately, it was Washington County Common Pleas Judge Randall Burnworth who had the honor of throwing the pie.

“Judge Burnworth was very happy to get to give me a pie in the face,” Derkin said.

Miner said Burnworth didn’t just throw the pie at him, he slowly mashed it into Derkin’s face.

“It was hilarious,” she said.

Derkin said it was incredible the club was able to raise so much money.

“Danielle did an amazing job of getting everyone together. It’s a worthy project that’s going to immediately help people impacted by the hurricane,” he said. “She did the legwork and got the people together. This was her first Rotary project and she hit a home run with it. A grand slam, actually.”

Other participants in the pie contest were Shawn Taylor of Peoples Bank, Terry Rataiczak of Kinetic Networking, Wally Kandel of Solvay and Heather Allender of the Marietta Community Foundation.

Miller said she thanked everyone who donated for the project.

The Marietta Noon Rotary’s next project is their 12 Days of Christmas fundraiser for college scholarships.