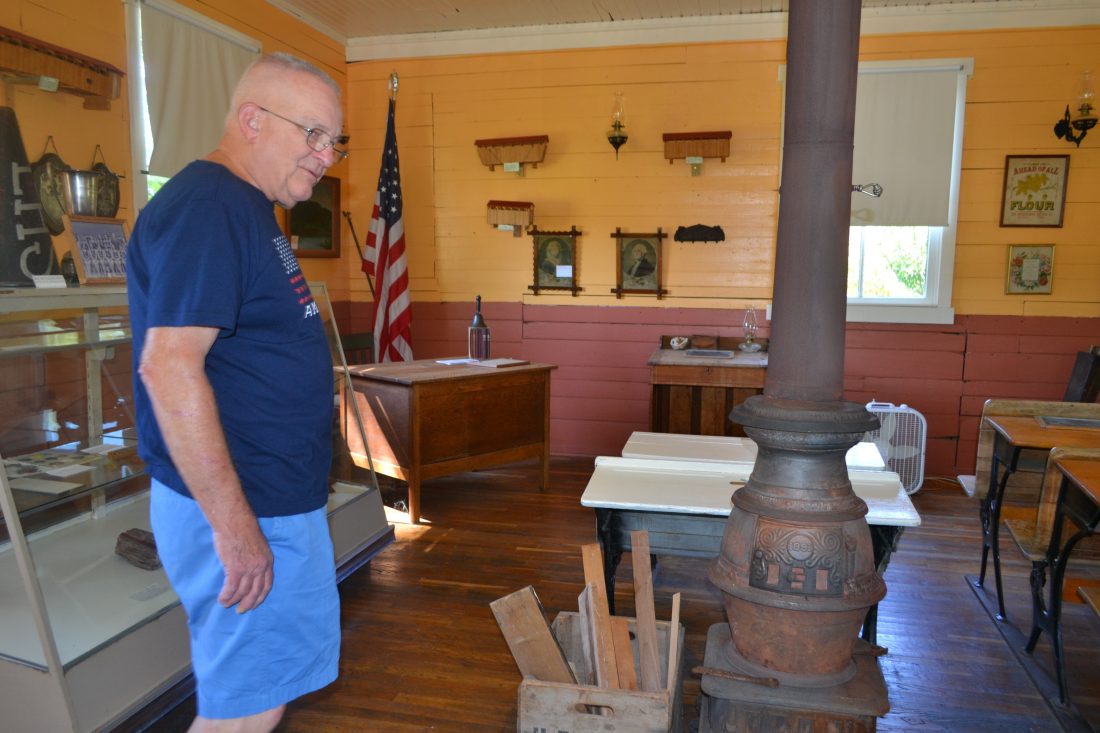 Photo by Michele Newbanks Lowell Mayor Steve Weber shows the stove built in 1891 which is the centerpiece of the Strait Run One Room School in Lowell, one of the stops on an upcoming driving tour of Washington County.

Local residents looking for something to do this weekend can take a self-guided tour to eight historic sites around Washington County.

Sponsored by the Children’s Toy and Doll Museum in Marietta, the Historical Driving Tour will be from 11 a.m. to 4 p.m. Saturday. Tickets are $10 per person, with children under age 12 free. Tickets may be purchased at any site on the tour and the tour can be started at any site. Door prizes will be available at each stop.

The tour circuit is approximately 32 miles.

Many of these sites are only open for a limited time, but they have opened their doors to help raise money for a new roof for the museum, which will cost approximately $25,000.

“I wanted to offer a unique tour to places of historical interest in the county,” said board member Donna Kern. “Each location offers its own part of history and this tour allows one to visit all eight locations on the same day.”

This is also the first time that all eight historical buildings have been open at the same time.

The Children’s Toy and Doll Museum features collections that are changed every two years and include toys from the 19th and 20th centuries.

Kern said the Henry Fearing House will feature a quilt with embroidered names of one room school students from 1938.

“My mother’s name is on that quilt,” she said.

Coming up Ohio 676, Lane’s Farm Market will be open for visitors during the tour. This time of year, they offer pick-your-own apples.

Another stop is the Christy School, a one-room school located off Ohio 676 on Christy Road, visitors will get to meet Betty Stollar, whose father taught in the school for two years.

As the tour passes through Beverly, the Oliver Tucker Museum and log cabin will be open for visitors. According to the museum’s website, the log cabin was built in 1798 and is the oldest completely hand-hewn log house residence that is in a museum in the Northwest Territory.

Following Ohio 60 down to Lowell, visitors will find the Strait Run One Room School on Buell Island.

Lowell Mayor Steve Weber said the school was built in the 1860s and remained a schoolhouse until the mid-1920s. After the school was shut down, it was the storehouse for grain and corn.

Before being moved and rebuilt on Buell Island in the early 1990s, it was located on the Morganstern farm on Big Run Road.

“It is open on request and of course, during Octoberfest,” Weber said.

He said there are desks in the schoolhouse which are original to the building, as well as some which were donated from Waterford schools.

The museum also features hand-made covered bridges which were made by Weber’s uncle.

“He did those back in the 1970s. Frank Weber was his name and he was a World War II veteran,” Weber said. “He retired from the post office and he needed something to do, I guess. He went around to all these places that these bridges were. He measured and took pictures and made them exactly as they were, inside and out. That’s what makes them nice.”

Along with the Strait Run School, the one room log cabin next door will also be open, he added.

The cabin was built on Rainbow Creek in the 1840s.

“They built a house around it. This was the interior,” Weber said. It was moved and re-erected in 2017.

Kern said volunteers will be at each location to explain the historical significance.

Diane Pfile, toy and doll museum board member, said the tour is all about learning about your neighborhood.

“I hope people feel like this is a great trip,” she said. “I hope they learned something new about their neighborhood.”

• Cost is $10 per person at any of the stops. Children and under attend for free.