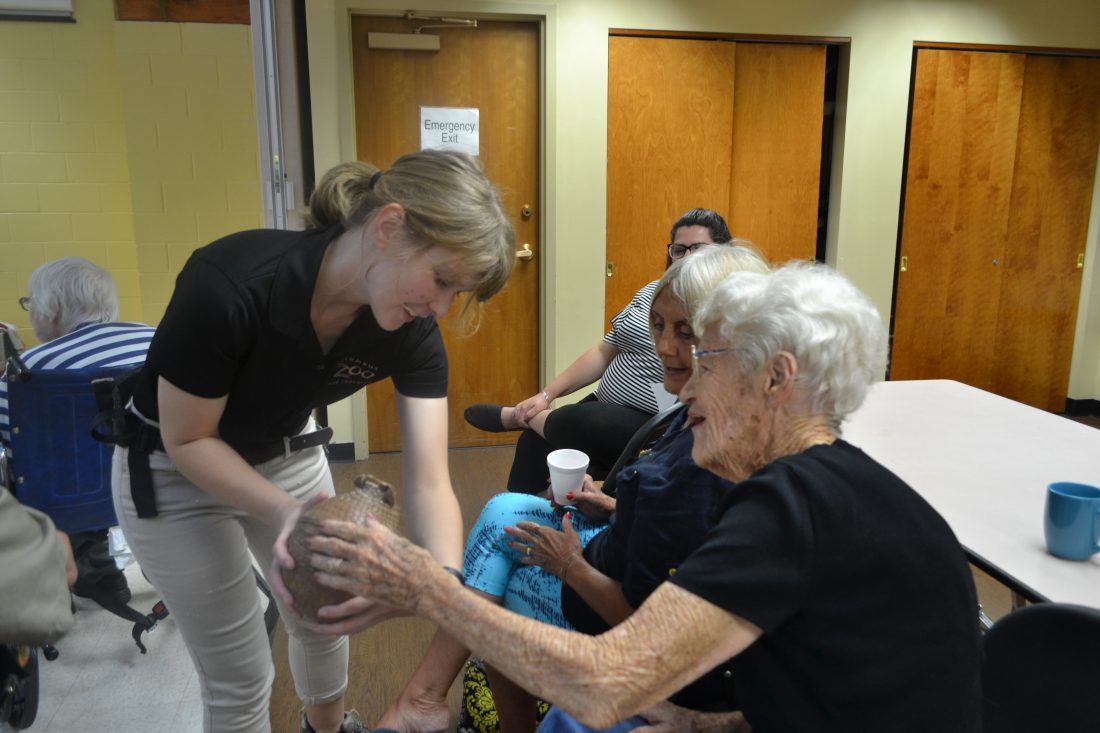 Photo by Michele Newbanks Sandy Carver pets a Virginia opossum during a visit by the Columbus Zoo to the O’Neill Center Monday afternoon.

As part of their Appreciation Day, the O’Neill Center in Marietta had a special gift for local seniors – a visit from the Columbus Zoo.

“It’s to give back to them for everything they’ve done,” said Heather Custer, activity assistant for the O’Neill Center.

Lauren Filippidis and Katie Costello, who work as animal ambassadors from the zoo, travel all over, visiting schools and senior centers to educate people on animals.

Some of the animals brought from the zoo were more common, like the Virginia opossum or the domestic duck, but others were more exotic and thrilled the crowd, like the two-toed sloth and the kinkajou.

First up was the Virginia opossum, which can eat 4,000 ticks in a summer, Costello explained. 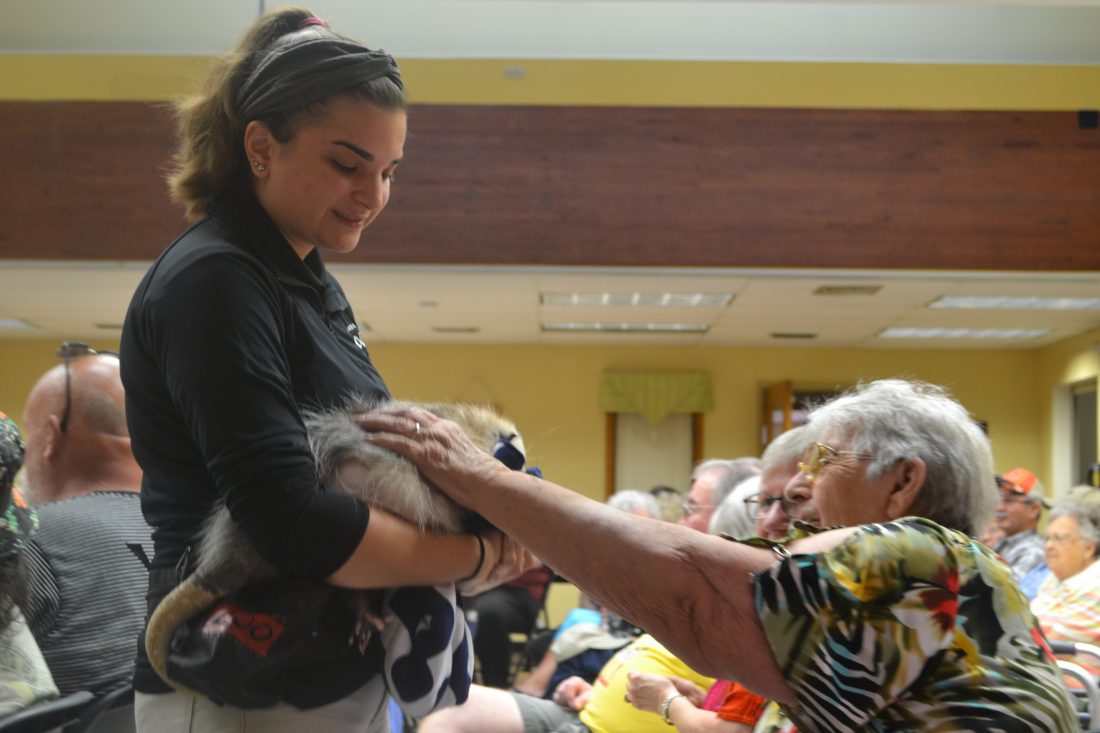 Photo by Michele Newbanks Sandy Carver pets a Virginia opossum during a visit by the Columbus Zoo to the O'Neill Center Monday afternoon.

“They are opportunistic eaters,” she added. “They’ll eat anything.”

As most of the animals were brought out, they were held so each of the residents could pet the animal or see it up close.

“It was amazing how many people were petting the animals,” said 67-year-old Tom Sharretts of Marietta. “It’s one of the best zoo visits I’ve seen.”

When the nocturnal kinkajou was brought from behind a shield, interest perked up and out came the cameras.

“The kinkajou is from the South American rain forest,” Filippidis said. “They are a close cousin to raccoons and are also called ‘honey bear’ because they attack bee’s nests and eat the honey.”

She said they are one of the most important pollinators in the world.

The animal handlers said there were a variety of animals and reptiles so local people could see something they might never see. For example, they brought out a bearded dragon, which is found in desert regions.

Costello explained that the bearded dragon sucks air into its throat, which turns black, which is one of their defense mechanisms.

“He’s such a huge hit and we love bringing him,” she said.

One of the smaller reptiles brought out was a male box turtle. Filippidis said the turtle is very comfortable being around people.

“You can see his arms and legs flailing around,” she explained, noting that if the turtle felt danger, it would retreat to its shell.

The animal handlers also explained to the crowd the difference between turtles and tortoises. Turtles live near water and have webbed feet. Tortoises live only on land and have feet that are shaped more like that of an elephant.

While the domestic duck isn’t unusual to see, it made a splash with the seniors. The little brown and white waddler was left to wander around the room, making friends along the way. It had so much fun being out of its carrier that it didn’t want to go back in.

Costello said the duck was making its debut after a couple of months of rest. The domestic duck isn’t something you’d expect to find at a world-class zoo, but it decided to make Columbus its home.

“We found it on the grounds of the zoo,” Costello said. They called local farms, but no one claimed the duck, so it was kept as an ambassador animal.

She added that while many people feed ducks bread, processed food can make ducks very sick. If people want to feed the ducks, they should be fed lettuce, kale or carrots instead of bread.

The seniors had a lot of questions about an animal found in South America, the three-banded armadillo. It is the only armadillo that will roll itself up into a ball, Costello said. She also explained about odd hairs that came from the armadillo’s belly.

“When it’s rolled up in a ball, it can use the hairs to tell if a predator is near,” she said.

Costello and Filippidis saved an animal for last that brought out a lot of cameras. Costello brought out a two-toed sloth, which weighed at least 25 pounds, around to the seniors. The seniors were not allowed to get too close or touch the animal.

Once the sloth made its way around the room, it was attached to a bar so it could hang upside down.

It was explained that the sloth has very slow metabolism and eyesight which makes what they see upside down appear right-side up to them.

Linda Lockhart, 64, of Marietta, said the armadillo was her favorite.

“I’ve seen the animals from the zoo at the armory,” she said. “It was different animals, but I thought the armadillo was cute.”

Lockhart said with coyotes and other predators, you don’t see many opossums anymore.

“I get a lot of deer and turkey on my land,” she said.

• More common species such as an opossum and a box turtle were brought to be petted.

• Exotic species such as the kinkajou and the sloth were available to see, but not touch.

• The zoo visit was part of Appreciation Day at the center.