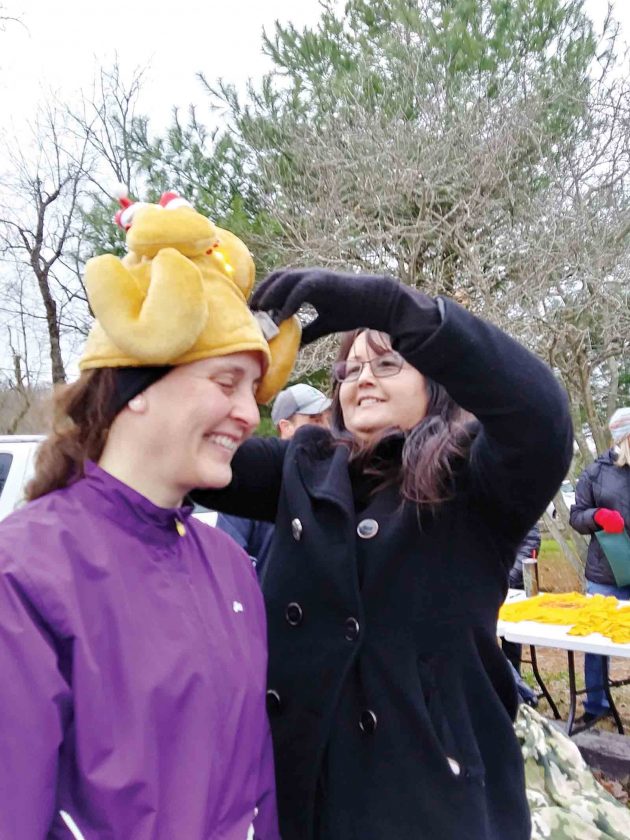 Around 300 runners and walkers faced blustery winds and chilly temperatures during the fourth annual turkey trot in Devola Thursday morning.

Jennifer Schenkel, president of the East Muskingum Civic Association, said there were 200 pre-registrations. The event replaced the long-standing fundraiser of luminaries for the organization.

“We’re trying to promote a healthy lifestyle,” Schenkel said. “We want the community and neighbors to have fun and do things as a community.”

She said proceeds go to the EMCA to provide recreation for residents of Devola.

The race was serious business for some runners, but for others, it was just a way to spend time with family.

“My family is from the Beverly area. They’ve done this in the past and it’s a good way to lose calories before packing them on later,” said Joe Shook of Hendersonville, N.C. “It’s a good activity together and everyone gets exercise, including the dog.”

Shook wasn’t the only participant with a pet. There were more than a dozen dogs, as well as babies in strollers and small children in wagons. The parking lot beside the Devola pool was filled with a unique assortment of people in hooded sweatshirts, costumes, turkey hats, shorts and T-shirts, as well as those in more serious running gear. There was even a runner dressed as Santa Claus.

Mary Schilling of Marietta was one of the runners wearing a turkey hat. She was taking part in the event with her family.

“It’s a good way to start the holiday,” she said.

“I’m here cheering them on,” she said with a laugh.

Last year, the top male and female runners received a frozen turkey. Schenkel said this year, the four runners with the best times would be awarded a pie, most of which were apple.

Passing the finish line with a time of 16 minutes and 56 seconds was Mitchell Morris of Marietta. The other pie recipients were Gary Depue of Marietta, Sam Jubb of Florida and Jonathan Calhoun of Bedford, Ind.