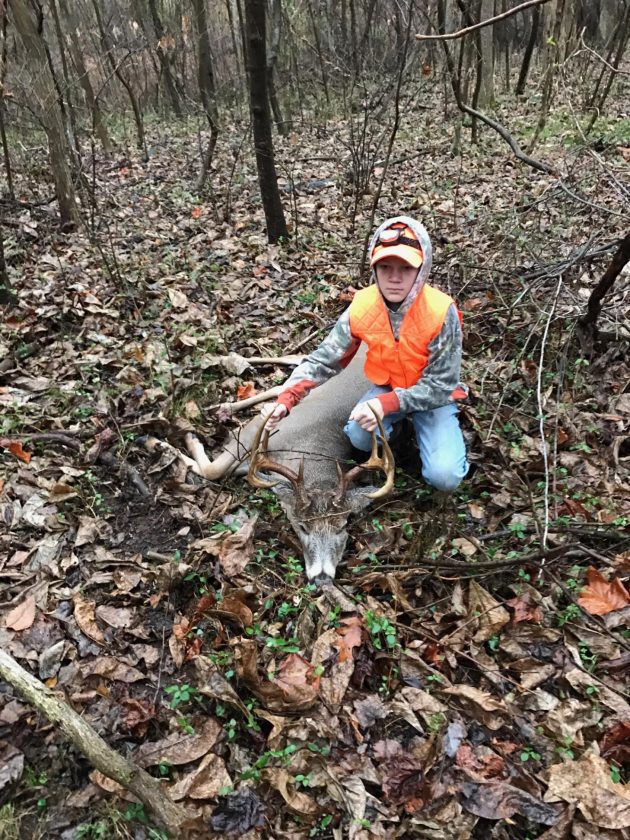 Photo by Ben Lang Braxten Lang shows off a deer he bagged during the youth deer gun season.

Ohio youths will be hitting the woods this weekend for the annual youth deer gun season.

Lindsay Rist, wildlife communications specialist for the Ohio Department of Natural Resources, said last year, a total of 6,563 deer were harvested in the state.

“Washington County is a three-deer county and you can use up to three of either-sex permits,” she said. “Statewide, there is still only one antlered deer per season.”

She noted deer management permits are not valid in Washington County, but the statewide bag limit is six deer.

“They can bag three in Washington County and go to another county and bag another three,” Rist explained.

Those wanting to hunt this weekend must have a youth hunting license and they have to be accompanied by non-hunting adults aged 18 or older.

“There is no minimum age limit, but you have to be 17 years old or younger during the season date,” Rist said. “They can get an adult license when they are 18.”

The youth deer hunters follow the same gun restrictions as the adults.

“They can use shotguns, straight-walled cartridge rifles or muzzleloaders,” Rist explained.

Colsen Lang, 11, goes to school at Putnam Elementary and has been hunting for two years.

“I love wildlife and I’ve been seeing a lot of deer and I like deer jerky,” he said, noting the biggest deer he’s bagged was an eight-point deer.

“We go hunting behind my house in some woods. I like going out with my family,” he said.

Colsen’s father, Ben, said there is one good thing about the youth deer season.

“The deer are still in rut and you’ll see a lot of deer,” Lang said. “He uses a muzzleloader. It’s a primitive weapon. Once he got one, it’s all he’ll use.”

This isn’t the only youth hunting season.

“There are quite a few other hunting seasons,” Rist said. “Youth small game season is in October, youth turkey season is in the spring. Youth waterfowl season is also in October.”

“There is no specific season for coyotes,” Rist noted. “They also don’t have a bag limit.”

“It’s been a tremendous year,” he said. “I’m probably 50 percent ahead of where I was last year.”

He said the ones he’s seen have all been quality deer with 180 or above points.

“It’s been an exceptional year,” he said. “This year, I’ve seen an uptick in kids bringing in squirrels and a couple of coyotes. One brought in a couple of pheasants. If that’s any indication, the kids’ deer season will be better than other years. I’ve had probably a half dozen youths bring in deer with archers.”

McKensie Mason, 10, attends Warren Middle School and has been hunting for three years.

She said her parents got her into hunting.

“You kind of get to go out into nature and see everything and spend time out there,” she said.

Her first year hunting, she bagged an eight-point buck.

“I use a muzzleloader. It’s really easy to handle and it’s not too heavy,” she said, noting she’s also a member of the Warren Archery team.

Josie Burke, 14, has been hunting for two or three years.

“When I started shooting, I didn’t like the sitting position with a rifle or a pistol,” she said. “Shotguns are more active and interactive with the shooting portion.”

Burke usually goes hunting on her family’s land and hopes to get lucky in harvesting a deer this year.

“I actually have never gotten a deer yet, so I’m hoping this season I will,” she said.

• Only one antlered deer per season can be harvested.