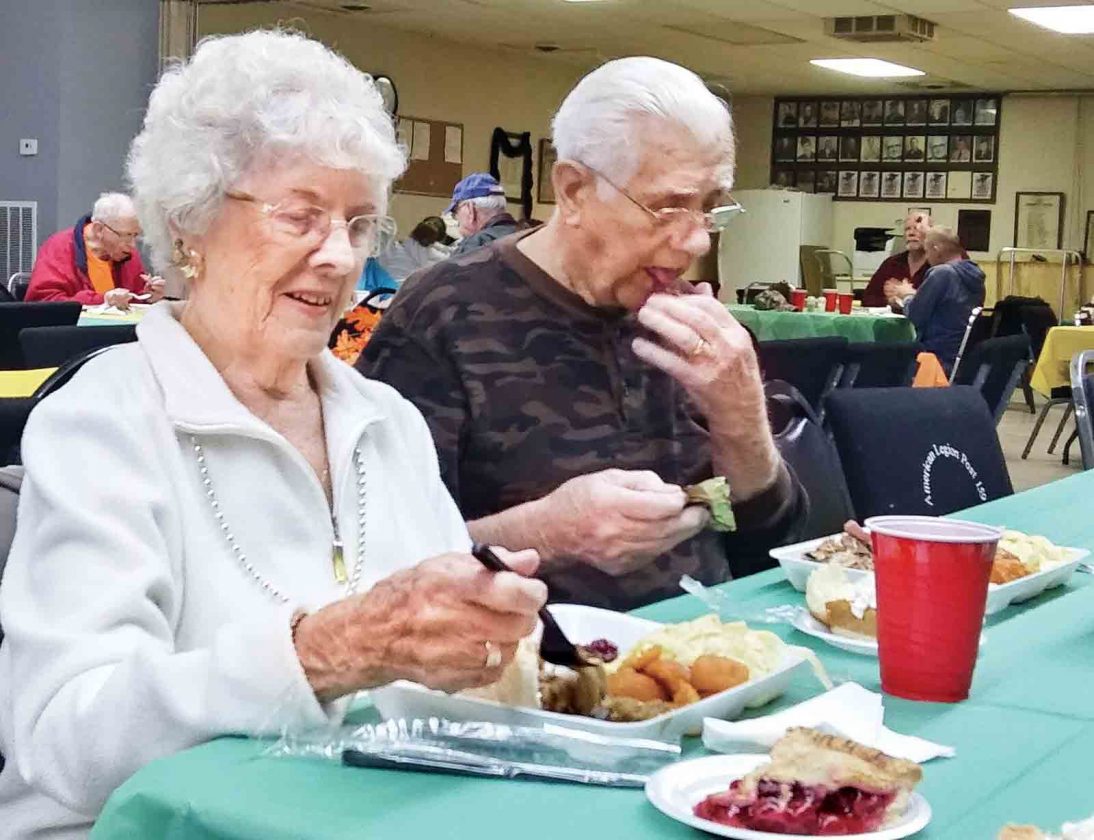 Photo by Michele Newbanks Walter Morey of Williamstown cleans butter from his fingers as his wife, Shirley Morey, eats her Thanksgiving meal at the American Legion Post 159 in Williamstown.

Marietta resident Michael Williams has supervised the luncheon at the Norwood United Methodist Church in Marietta for the last two years. He said they haven’t been as busy as they were last year.

He explained the free holiday meals are sometimes seen as as only for low-income people.

“I think it’s folks that are by themselves. It’s folks that maybe don’t want to put on a whole meal, maybe they can’t,” he said. “Sometimes it’s folks who just want to spend time with the community.”

Williams said he and his wife, Amy, got involved to meet people.

“We wanted to meet people that we otherwise wouldn’t meet. This is something that was in need in this community,” he said. “I brought three of my four kids with me today. We just wanted to spend time together. These are our neighbors, you know?”

Madge Jarrett, 74, of Marietta is a widow and wanted to spend time with others and have a good meal.

“My foster sister is a member of this church,” she said. “They serve a good dinner in here.”

“I’ve delivered to seniors and handicapped shut-ins,” he said. “Just people who called in and said they needed a meal.”

He said it was a nice group of people that are involved with the church’s luncheon.

“I know so many people here from the O’Neill Center, the Knights of Columbus and different churches,” he explained. “For them to do this (on Thanksgiving), only special people do that.”

For some of the volunteers, it was their first time serving meals at the church.

“My family had Thanksgiving dinner last Friday,” said Waterford resident Penny Sparling. “My husband had chemo yesterday and I didn’t have anything to do today, so I thought I’d donate my time.”

The parents of Deborah Partin, of Sycamore Valley, have volunteered at the church for a couple of years, although this was her first year.

“Our family has always been fortunate enough to have a great meal all together, and if we can help somebody else have food, whether they are less fortunate or don’t have family or whatever it may be,” she said. “I thoroughly enjoyed it.”

Those across the river in Williamstown also had the opportunity to meet for a free turkey dinner at the American Legion Post 159.

Commander Doug Meeks said this was the 15th year for the dinner and they normally feed 200-300 people.

“Fifteen years ago, the past commander Greg Meredith had a vision to give back to the community that would be a long-lasting tradition,” he explained. “It’s a dinner for residents of the Williamstown Community School District and members of the post. Donations go toward next year’s dinner.”

Formerly a Williamstown High School cook for 25 years, Shirley Morey and her husband, Walter, have gone to the Thanksgiving dinner in previous years.

“We come here all the time,” Shirley said.

Their son, Dave Morey, volunteered to help set up for the meal.

“I also volunteer once a month for the fish fries,” he added.

“I’m here for the friendship,” she said. “They have awesome food. It’s nice they have this so we don’t have to sit alone and eat.”

• This was the second year for the holiday meal at Norwood UMC under the direction of Michael Williams.

• Turkey, mashed potatoes, green beans, stuffing and pumpkin pie were among the foods available for lunch.