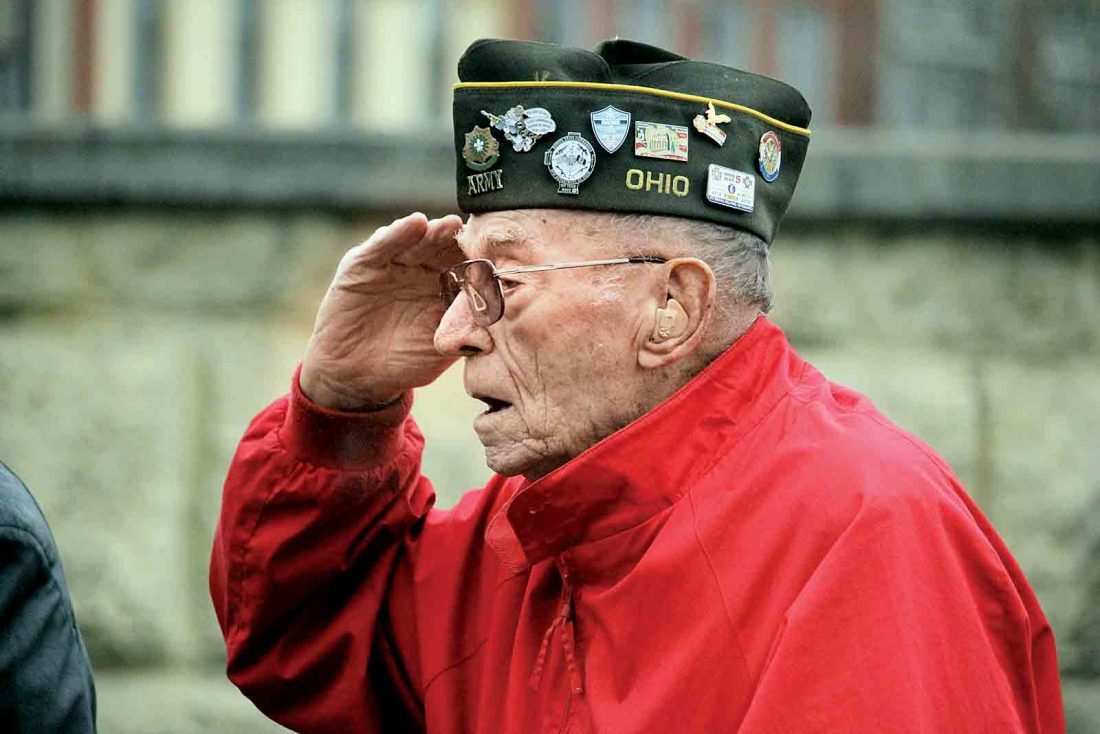 Elbert Cox, of Marietta, salutes during the singing of the National Anthem Friday to honor Pearl Harbor Day in Marietta.

She still can hear the announcement over the radio.

“Hello NBC, hello NBC. This is KGU in Honolulu, Hawaii,” said the voice. “I am speaking from the roof of the Advertiser Publishing Company building.”

An additional 1,143 were left wounded.

“That voice was gruff,” described Shirley Cox, of Marietta. “I still vividly remember it and my mother standing next to the radio as it announced the attack.”

“We have witnessed this morning, the distant view a battle off Pearl Harbor and a severe bombing of Pearl Harbor by enemy planes, undoubtedly Japanese,” the radio broadcast continued.

Cox was 4 years old on Dec. 7, 1941, as she watched her mother fret over the news, standing by the radio knowing this attack would mean the U.S. was again going to war.

On Friday, in Marietta, Cox attended with her husband Elbert, a veteran of the Korean War era, the memorial service marking Pearl Harbor Day put on by the Washington County Veterans Service Commission and local veterans’ organizations.

Commissioner Larry Proctor offered words of wisdom in his keynote address during the ceremony, pausing several times to choke back tears as he remembered not only the servicemen who died in the fateful attack 78 years ago but also the family sacrifices made in the U.S. after a later evening broadcast went out across the airwaves from First Lady Eleanor Roosevelt.

“By tomorrow morning, the members of Congress will have a full report and be ready for action,” she said. “In the meantime, we the people are already prepared for action. For months now the knowledge that something of this kind might happen has been hanging over our heads and yet it seemed impossible to believe, impossible to drop the everyday things of life and feel that there was only one thing which was important — preparation to meet an enemy no matter where he struck. That is all over now and there is no more uncertainty.”

Proctor explained Friday that while President Franklin D. Roosevelt’s words marshaled the men of the nation to fight, speaking of the ‘date which will live in infamy’ it was the words of the First Lady which empowered the women of the country to support the enormous undertaking.

“We know what we have to face and we know that we are ready to face it,” he quoted of the First Lady’s address. “This mobilized the women, birthing the movement of Rosie the Riveter… arming, clothing, supplying the war effort–who did that? The women of America.”

The ceremony concluded with the release of wreaths from the Putnam Bridge into the Muskingum River Friday, memorializing those servicemen who died at sea not just on Dec. 7, 1941, but in all wars.