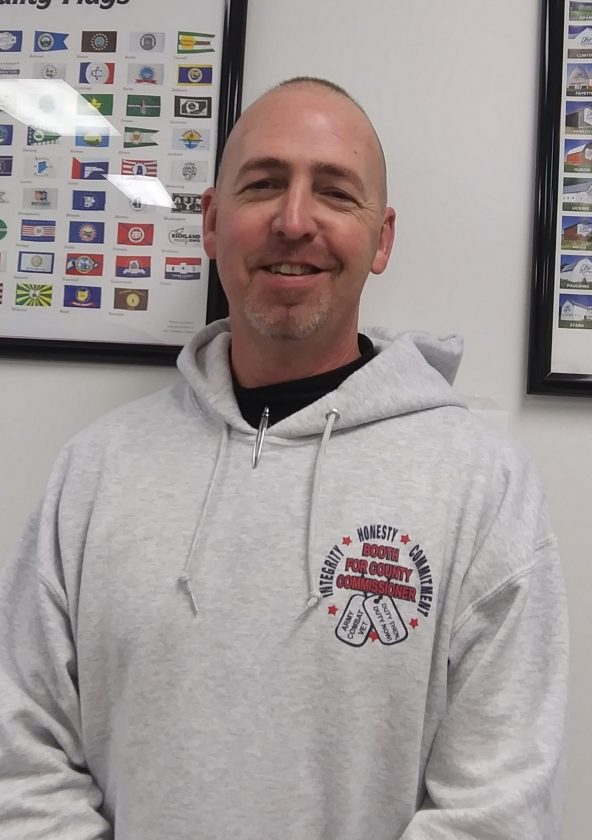 Incumbent republican David White is being challenged by Lowell resident James “Jamie” Booth in the primary and Lower Salem resident and former commissioner Cora Marshall, a Democrat, in the general election if he wins the primary race. Republican Charlie Schilling of Beverly is challenging incumbent and current Commission President Ron Feathers.

Booth said since he started running for the commission seat his eyes have been opened to a lot of things in the county.

“I feel a change is needed because of the communication and cooperation with different (county) departments,” he said. “There have been a couple of squabbles with the juvenile court and confusion with the merger of (Washington County Job and Family Services) and Children Services. With the Devola sewer project, if I was living in Devola, I would feel almost helpless.”

He said at his Lowell home, he’s dealing with iron and manganese in the water, so he understands the financial issues the residents of Devola are facing with the upcoming Devola sewer project. 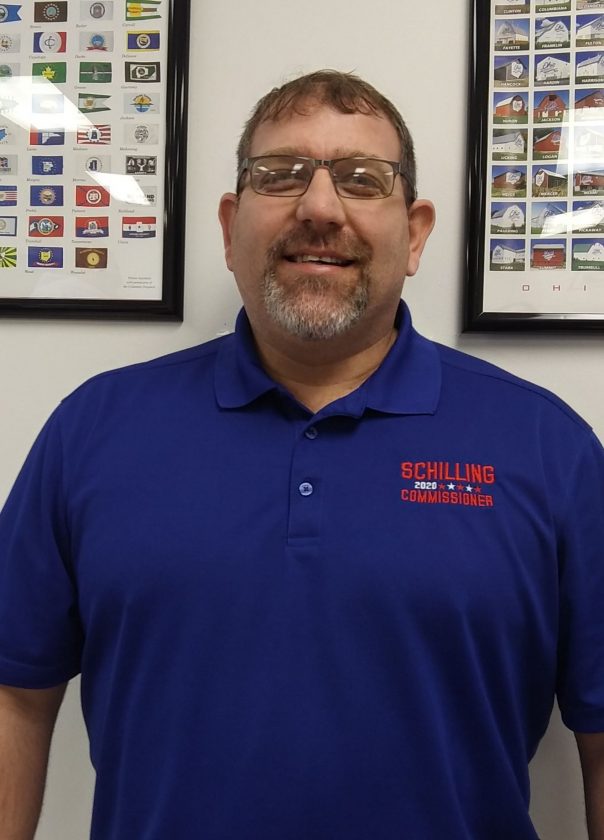 Booth said he knows the county is under a court order to sewer most of Devola, but that he wants to help the residents get through the process as easily as possible, “no matter which way it turns out.”

His background is as an honorably discharged combat veteran of the U.S. Army, as well as his working in law enforcement and in the car business, where he dealt with banks and finance. He said he believes his background will help if he is elected on March 17.

He currently owns a trucking company, where he employs five people, along with owning a couple of rental houses. Booth explained he has a truck manager who handles the day-to-day business, so he has time to dedicate to the county.

“I’ve been working like this since before August,” Booth said. “That’s why I can attend commission meetings every Thursday. I can dedicate full-time to being a commissioner with no problem.”

He said he isn’t running for the office because he needs the job, he just wants to do the job.

One of the things Booth thinks needs improvement is communication between county departments and the commission.

“We have good department heads and I think communication is key,” he said. “Without going to the source, you have these squabbles that happen.”

Booth has been visiting with as many people as he can in the county and believes he can do a lot to help the area.

“I do look for economic growth. I want to be an advocate for both big and small businesses,” he said. Booth has been going to the weekly commission meetings for several months and said he can see things that need improvement.

“It’s the involvement with all the departments. I’ve been to commission meetings as short as 15 minutes,” he explained. “They need to put more (information) out there. I think more needs disclosed.”

He gave an example from Thursday’s meeting when the weekly Then & Nows were passed without discussion. Much of the time, people have no idea what is passed in those documents.

According to White, Then and Nows are bills that have already been paid without being pre-approved. This is usually done as the result of due dates on bills. White said if the payment was more than $100, state law requires the bill be run through a public meeting, even if it’s already been paid.

“Things are done with no formality. There are a lot of department heads sitting there, and a lot of time, there isn’t anything going on with them. I think some communication happens outside the meeting,” Booth said. “I think there needs to be a change for the good of the county.”

Challenger Charlie Schilling said he would also like to see change in the county.

He has spoken with business leaders in the county that are frustrated with a lack of focus on economic development.

“I think the biggest thing I see is the communication is not good throughout our county,” he said. “I want to improve communication and provide a pro-business sense. I think when you provide better communication through the county, inter-departmentally, it makes people want to work together.”

Schilling was on the board for the Fort Frye Local school district from 2011-2019, where he served as president some years.

“I think when you deal with a school budget, there area a lot of different accounts,” he said. “We showed good fiscal responsibility with taxpayers in the school district.”

Schilling was chairman of the finance committee for several of his years on the board, and handled budgets others might not be familiar with, he added.

He said the district was in a better place than it was before his two terms on the board. A preschool was added and academic scores increased, he noted.

“It starts with hiring good people, and I think we did that over the eight years I was on the school board,” he explained. “It started with hiring the superintendent, who recruited good administrators and good teachers with the help of the board.”

One of the issues Schilling has already been talking to county residents about is the Devola sewer project.

“The people I’ve been talking to from Devola are frustrated because the commissioners have been kicking the can down the road and it’s ultimately costing our taxpayers more money,” he said. “It impacts residents in a negative way because of the enterprise fund. It affects not only residents in Devola, but residents in the rest of the county.”

Schilling noted some former commissioners are endorsing him for the position.

“Rick Walters, Jim Vuksic, Glen Miller and (current Lowell mayor) Steve Weber,” he said. “That tells me there is time for a change.”

Messages were left for former commissioner Cora Marshall but none were returned.

• Education: Degree in police science and criminology from Hocking College.