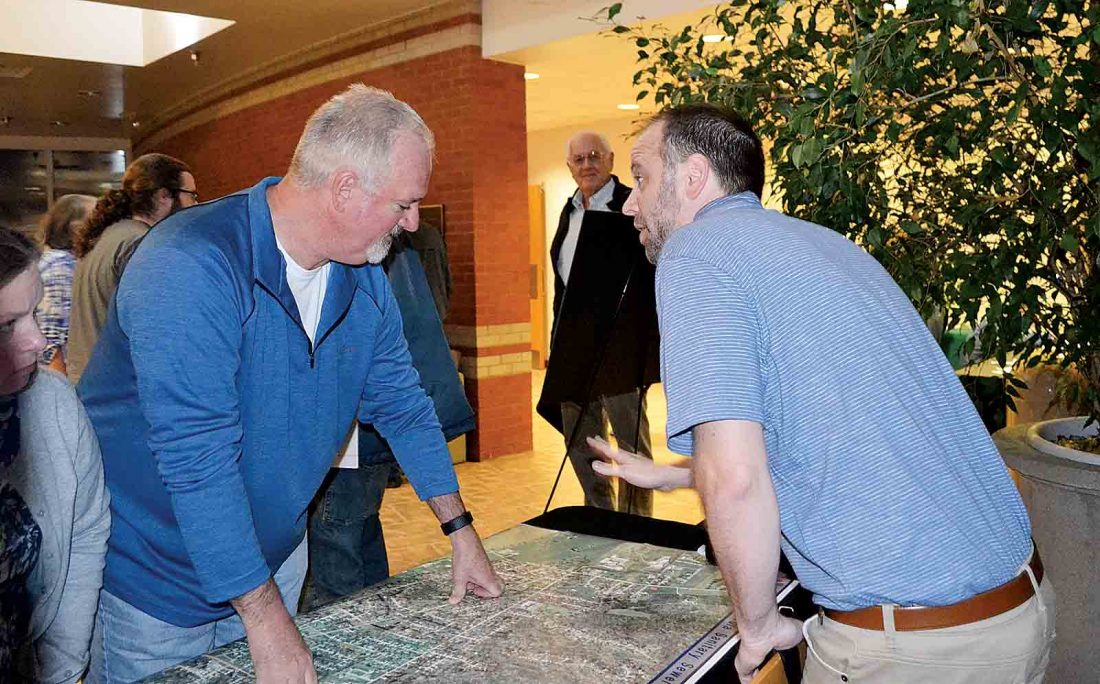 Depending on which option is chosen for the new sewer system, it is estimated Devola residents will pay between $105 and $119 per month for their sewer bill.

Naiel Hussein, project manager for the engineering firm WSP Inc., said the survey and mapping of properties has already begun.

Hussein outlined the two main alternatives for the sewer system. The first option is a gravity sewer system, while the second is a pressurized sewer system.

Hussein said after the meeting that the $105 to $119 per month would include everything, such as the laterals, tap fees and the abandonment of old septic tanks. The septic tanks will be pumped out and refilled with dirt and gravel, then re-buried.

The gravity system, which is what the City of Marietta uses, would require the construction of at least one new pump station at nearly $250,000 each, said Rich Wischmann, sewer design engineer.

The estimated total capital construction cost of this system is $17.4 million with an annual operating and maintenance cost of $149,000.

As outlined in the general plan submitted to the Ohio EPA, the gravity system would require PVC sewer main pipe in diameters ranging from 8 inches to 10 inches. Along with the new lift stations, it would require excavations that are typically 10-12 feet deep.

The gravity system transports wastewater mainly by gravity along a downward-sloping pipe. Lift stations are required to get the wastewater from a valley to a higher elevation.

If the engineers go with the gravity system, the new lift stations could be placed on Masonic Park Drive or near Magnum Magnetics.

The second option, the pressure sewer system, would lessen the amount of excavation needed. A single excavation on each property will connect the lateral to a grinder pump. Instead of digging 10 to 12 feet deep, the laterals would be constructed in a trench just below the frost line, which is about 30 inches deep.

With the pressure system, the wastewater would flow to the Devola Lift Station and then to the Marietta Wastewater Treatment Plant. Individual grinder pump units would be installed at each property to lift the sewage and pressurize the system, eliminating the need for a major lift station.

The pressure system’s estimated total construction cost would be $12.5 million with operating and maintenance costs of $105,000 per year. The individual grinder pump units would require maintenance every 3 to 5 years, Wischmann said. If the pump would go bad after the warranty is expired, it would be up to the homeowner to pay to fix or replace it at a cost of approximately $1,500 for a new pump.

Along with construction estimates, residents heard from Chris Howard of Heritage Land Services, who discussed the right of way and easement acquisitions. There will be an estimated 300 to 500 easements needed to construct the project. Each property will have to be assessed individually, he said

“Each program has eligibility requirements, and each program has a specified timeline,” he said. “Once construction starts, it is highly unlikely the homeowner will receive funding.”

The question was asked of how it would impact property taxes and Washington County Commission President Ron Feathers said the tax increases should be lower than $500 per year, but the topic will be covered at a future meeting when more information is known.

Hussein said the second public meeting will be held in April, the final preliminary design is due in July, with the final design due in December.

“The first year will be the design phase, with the second and third year the construction phase,” he said.

The construction process is scheduled to start in July 2021, with completion scheduled for September 2023.

“It’s probably the most informative meeting I’ve been to yet,” said 64-year-old Randy Krigbaum. The 40-year resident of Devola said he wanted to learn more about the easements and right-of-way acquisitions. “They talked about everything I wanted to know about that I didn’t already know.”

After the meeting, residents were able to meet with representatives from Heritage Land Services to ask specific questions about easements. They were also given the opportunity to discuss concerns with project engineers, as well as Washington County Engineer Roger Wright.

“It was very informative. It covered what I thought it would,” said 68-year-old Ron Goddard. He said the only other thing he was still worried about was the final cost for homeowners.

A website is now available with up-to-date information on the project. Tuesday’s meeting will be added for those who weren’t able to attend the meeting. The website is www.devolaimprovement.com.