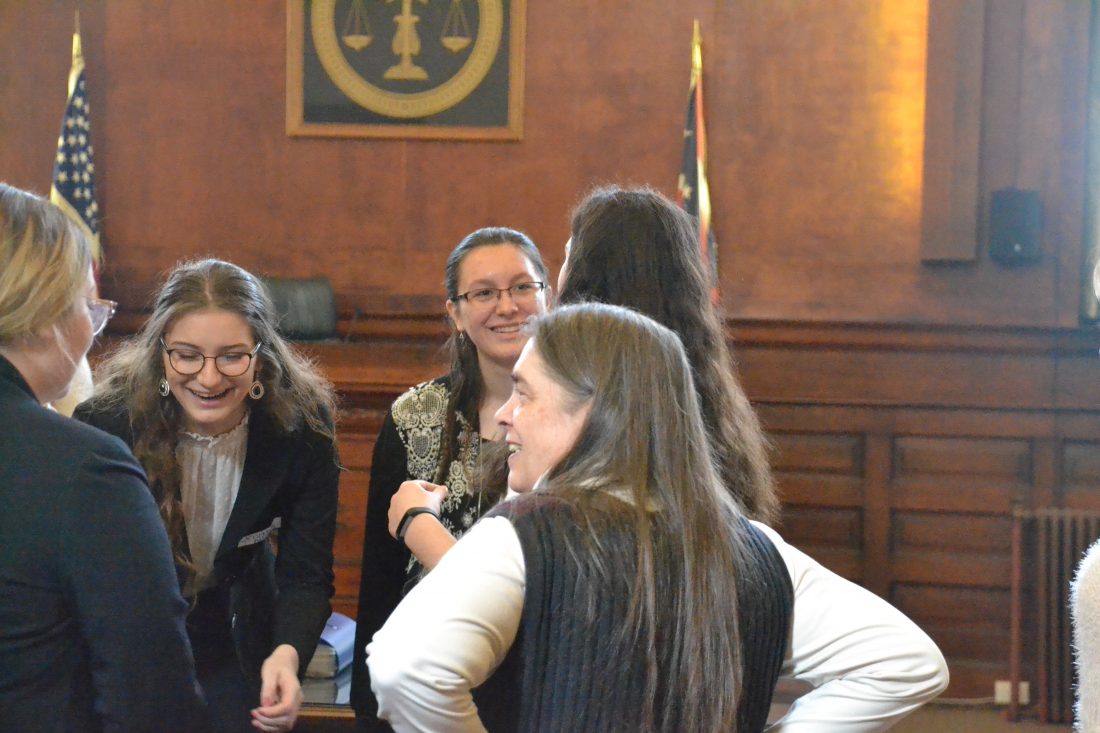 The question was whether a school could suppress the First Amendment right of students to demonstrate in support of the Second Amendment.

The complex civil case was tried six times in two courthouses in Marietta Friday, in actions that involved dozens of high school students. The goal wasn’t a verdict but rather to present a case in a convincing manner.

The Mock Trial, an annual January event held around the state, is the culmination of months of work by the students, their teachers and their volunteer attorney coaches. Teams from Warren, Federal Hocking, River Valley Bidwell and Harrison Central converged on the Washington County Courthouse and the Marietta Municipal Court Friday morning to test their skills as lawyers, witnesses and bailiffs.

Each team had to prepare the same case, as both plaintiff and defense. An imaginary high school student, Rory Maldonado, and some of his friends have been disciplined by their school, Trillium High, for participating in a Stand By Your Second Amendments rights rally, and Maldonado is suing the school district to have the disciplinary action expunged from his student record, and to receive damages and compensation for legal fees.

The case is not straightforward – in the previous year, for example, a much larger rally in favor of gun regulation had been blessed by the school, but in the days leading up to the gun-rights rally, a food fight erupted in the school cafeteria, with two students being injured, and a build-up of tension related to the Second Amendment rally was blamed by some for the uproar. Others said a food fight was not an uncommon event and this one was triggered by an animal rights faction and the pending removal of vegetarian options on the menu.

Students received the package of study materials in the fall from the Ohio Center for Law-Related Education, sponsors of the Mock Trial project. Students assume the roles of attorneys, witnesses and bailiffs, and they have to prepare both defense and plaintiff cases.

Jenna Walters and Breanna Tonkery presented the case for the plaintiff in the first session of the morning, against the defense case for the school district mounted by a Federal Hocking team.

The trial required nearly 90 minutes, with opening statements, sworn witnesses, cross-examination and rebuttal, entry of documents into evidence, objections, references to case law and closing arguments. The judges – local volunteer attorneys – returned point scores for the teams rather than verdicts.

“Our coaches prepared us really well, I felt confident in there,” Walters said after the trial. “It was a lot of hard work, and the case was interesting, so closely related to school shootings.”

Tonkery said her work in Parli Pro – parliamentary procedure studies through FFA – helped her in presenting the case.

“It was an interesting case, there were a lot of little details,” she said.

Freshman Kodi Reynolds was an attorney with the Warren Schoolhouses Gatekeepers team.

“It was stressful but it went really well. Every objection, I just didn’t know what to say,” he said. “It was a lot more work than I expected, but it was a class I always looked forward to.”

Johnson said the project rarely allows freshmen because they’re often intimidated by the older and more confident students that normally sign up for it, but Reynolds was exceptional.

He received an Outstanding Attorney award from the judges, with the other going to Maya Smith of the Midnight Warriors. Also from that team, Chloe Radar and Brook Holdren were named Outstanding Witnesses for their convincing performances and knack for thinking on their feet.

The Midnight Warriors will fight on. The team was selected to advance to the regional competition in February.

“The team is really excited, it’s been a while since we’ve been to the regionals,” Johnson said.

• A project of the Ohio Center for Law-Related Education.